Celia Center is thrilled to announce the inaugural Celia Center Arts Festival, showcasing artwork and workshops created by foster youth/alum and adoptees about their lives and experiences. 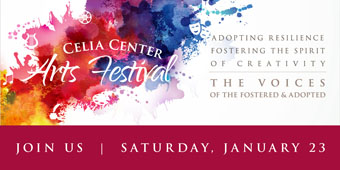 Festival takes place on Saturday, January 23, 2016 at Electric Lodge in Venice, CA starting at 11am. The event is a daylong extravaganza shedding light on voices that are not often heard from adoptees and foster youth. The public can interact by signing up for healing workshops (focusing on the theme of foster/adoption), watch musical or theatrical performances, and stroll through a visual art exhibition. As a locally organized fundraising event, all proceeds benefit Celia Center, a non-profit devoted the critical needs of the foster care and adoption community. Join us in supporting safe and healthy families. 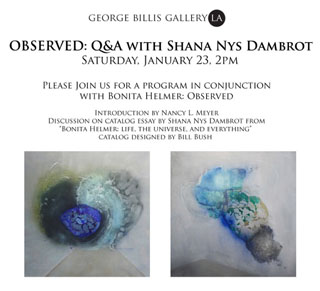 “Observed” feature Helmer’s abstract paintings and will be her fifth exhibition at the gallery. Helmer combines her attraction to science and the universe with her first love and preferred medium…painting. She is currently a teacher at Otis College Art and Design where she has been teaching art since 1998.

As a teacher, Helmer recognizes the importance of learning, and has studied the origins of the universe via physics and astronomy at UCLA. In 2014 Exploration Institute invited Helmer (the sole visual artist) to be on the board. The Exploration Institute brings together astronauts, physicists, underwater researchers and more.

In Westchester…Otis College of Art and Design, Bronya and Andy Galef Center for Fine Arts, (9045 Lincoln Blvd., LA 90045) hosts an opening for a group show “Performing the Grid” from 4-6pm with an art lecture following with Professor Hannah HIggins at 7pm. 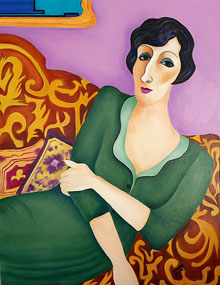 Maxine Smith was born and raised in New York City where she traveled to school on buses and subways. She spent a lot of time observing people. It fascinated her, and still does, the fact that in this over-populated world we live in, there are no two faces alike…very similar perhaps, but not identical.

For more info, visit the Upcoming Event Page for a full feature. 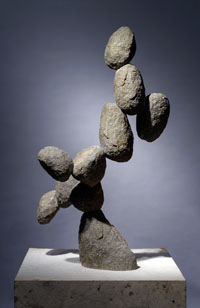 Woods Davy works with stones in natural, unaltered states collected from the sea or the earth, and assembles them into fluid and precarious sculptural combinations that appear weightless. These sculptures of heavy stone elements seem to defy gravity and float like clouds, roll like waves, or bend with the flow of the ocean’s chaotic currents. Art writer Shana Nys Dambrot has observed that Davy’s work is “a collaboration between artist and nature,” one in which the artist “prefers to cooperate with the pre-existing uniqueness and objecthood of his materials.” Every stone contains the story of its own formation, as well as evidence of interaction with its environment.

Concurrently, the gallery will present an exhibition of recent work by Tom Lieber. A painter of large abstractions, Lieber is, according to writer Carter Ratcliff, an artist whose work “invites us to note how complex the act of looking becomes when we attend carefully to its pleasures.” With brushes, rags, and his fingers, Lieber layers calm, atmospheric washes amidst dark, frenetic skeins. These marks, lurking below and inching above the surface, create a tension with the rest of the painting, as though they are bursts of consciousness within an unconscious mind. 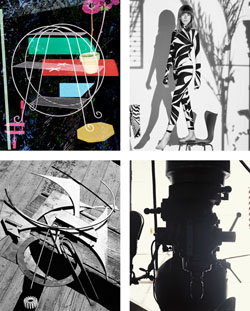 Installed in the gallery are sixteen framed photographs—four sets of four pictures. Each of the sets is composed of work from a different series: a continued exploration of multiple exposure still lifes, b&w still lifes made in Porter’s father’s sculpture studio in Maine, a model wearing a dazzle camouflage suit that Porter commissioned, and pictures made at the fabrication facility Polich Tallix in upstate New York. Together, they form a mosaic of inquiry and interest, overlapping at times, and bonded by their pictorial similarities. 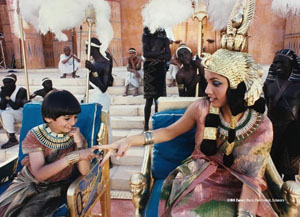 Billy Zane is best known for his achievements as an actor in over 120 films. It was his role as Caledon Hockley in the 1997 blockbuster film Titanic that brought him his highest distinction garnering him a Blockbuster movie award as best supporting actor. Among his other credits: Memphis Belle, Dead Calm, Tombstone, Sniper, Zoolander,  Orlando, The Phantom, and Twin Peaks. Billy will be reprising his role as himself in the upcoming, Zoolander 2 released Feb 12th and is about to star in a new series for ABC and LIONSGATE called Guilt to be shot in London this Spring.

In the mid Wilshire area…

Little Dreams in Glass and Metal: Enameling in America, 1920 to the Present,” is the first nationally traveling exhibition of enamel arts in more than 50 years. Enameling – the art of fusing glass to metal through a high temperature firing process – is an under-documented art form rich in history, technique, and visual opulence. The exhibition explores the history of enameling in this country over the past 100 years through objects ranging from cloisonné jewelry to large abstract wall panels. “Little Dreams in Glass and Metal” has been organized by the Los Angeles-based Enamel Arts Foundation.

Also opening tonight….”Made in China: New Ceramic Works by Keiko Fukazawa,” the first solo museum exhibition of the Los Angeles-based ceramic artist. For the past three years, Fukazawa has visited Jingdezhen, China – the “porcelain capital” of the world – for artist residencies, where her observations of Chinese capitalism sparked a new body of concept-based work. Using porcelain busts of Chairman Mao Zedong, luxury brand logos, and timeless glazes, Made in China represents Fukazawa’s playful and ironic examinations of the effects of globalization and consumerism in China. Made in China: New Ceramic Works by Keiko Fukazawa is on view from January 24 – May 8, 2016

The reception is free for CAFAM members and open to the public for a $12 admission fee.

LAM Gallery is pleased to feature five exciting Taiwanese artists, based in Taiwan, China, and New York — most of whom are having their first gallery show in California. 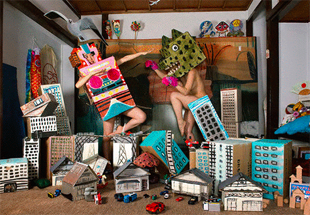 For many this show will be an eye-opener. While the work of Chinese avant-garde artists such as Ai Wei Wei and Cai Guoqiang have become internationally famous, work by Taiwanese artists is less familiar. Taiwan artists took the plunge into contemporary art well before mainland China, since Taiwan has long been a more open society, especially after the end of martial law in 1987. Culturally, Taiwan has been strongly influenced both by the United States, which helped guide it through the post-war era in the 1950s and 1960s, and by Japan. Japan ran the island as a colony for 50 years (1895–1945), and the “Japanese miracle” of the postwar era made Japan the Asian country to emulate. 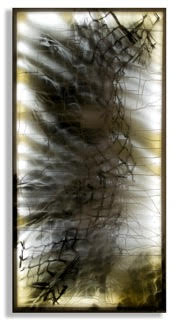 ontemporary is pleased to present a solo exhibition titled “CONTINUUM” featuring work by artist Claudia Meyer, who pulls inspiration from nature and manmade elements to create multi-dimensional mixed-media works, many of which are backlit with LED.  In this newest body of work, Meyer explores the nature of water and aquatic elements.

“I deliberately decided to emphasize the abstract shapes and richness of water, adding artificial light and playing with natural reflections and materials used.   Indeed, water’s mirroring effects, its transparency, its flow and streams and the visual sensations it provides when looked at very thoroughly have always fascinated me.  Most of the thirty art pieces that will be exhibited at FP Contemporary will incarnate the expressions of these observations.” – Claudia Meyer

Wine will be offered.

Another in Culver City… 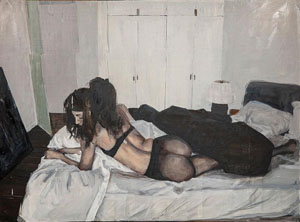 A figurative oil painter who explores the expressive and emotive possibilities of the body, Wu delves into the vulnerability of self and the haunted nature of human consciousness. Her evocative and sensual depictions explore themes such as nostalgia and metaphysical becoming, expressing ephemeral states through physical manifestations of subjectivity. Wu incorporates abstract gestures into her works, often dissolving edges and contours to conflate environments and disrupt the representation of bodies, splintering and splitting the cohesion of an illusory whole in favor of a more experientially realistic incoherence.

Gloria Delson Contemporary Arts presents its first exhibit of 2016, “ONE”!

The group exhibit explores the mediums of Painting, Mixed Media and Sculpture…with a special nod to Photography!

Please RSVP (use LAArtParty -it is past rsvp date): pw@GDCAgallery.com 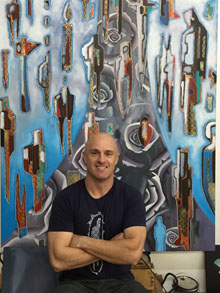 s Harper Art is pleased to present Minor Identity Crisis II on Saturday, January 23 from 6:30 to 11:00 P.M. at 11306 Venice Blvd. L.A., Ca. 90066. Minor Identity Crisis II is a collection of figurative, acrylic paintings by Gus Harper; this event is free and open to the public, but private viewings can be scheduled at the convenience of interested parties and institutions.

Minor Identity Crisis II heralds the ongoing dialogue that was started last March when Harper showed his work at the gallery at Essentia on Main st.

In many respects, the current exhibit enhances the dialogue that commenced with that first show. The works in Minor Identity Crisis concerned themselves with the identities we assume throughout our day as we contend with information overload–as more and more information is heaped upon our waking moments. In contrast, the paintings in Minor Identity Crisis II are about overcoming those fears by channeling them into generative, creative endeavors and becoming the best versions of ourselves. Recently, the Santa Monica native painted The Minor Identity Crisis Mural on the 34th and Pico exit of Interstate 10; the work is a sequence of eight-foot murals of varying length that repeat thematic figures throughout; the figures tie the disparate murals together, and repeat them almost to the point of making them talismans. The mural has acquired a quiet following as the exit is utilized by thousands of Santa Monica residents whom live abutting Interstate 10 per day.