k-based artist Tamar Halpern. A brunch vernissage will be held today from 11:00am – 3:00pm.

Playback. The last of Raymond Chandler’s novels, written before he died, takes place in the fictional town of Esmeralda – a pseudonym for La Jolla, California. Chandler was the master of film noir. Playback makes me think of a tape rewinding…. like the disintegration loops by William Basinski…. in the 1980s, Basinski constructed a series of tape loops consisting of processed snatches of music captured from an easy listening station. When going through his archives in 2001, he decided to digitize the decades-old loops to preserve them. He started a loop on his digital recorder and left it running, and when he returned a short while later, he noticed that the tape was gradually crumbling as it played. The fine coating of magnetized metal was slivering off, and the music was decaying slightly with each pass through the spindle. Astonished, Basinski repeated the process with other loops and obtained similar results.

Jill Joy Gallery hosts an art talk with Michael Giancristiano and Aline Mare, moderated by Shana Nys Dambrot from 2-4pm. Its current exhibition, “Organic Integration,” features recent work by two Los Angeles artists, Michael Giancristiano and Aline Mare. Both artists deal in the currency of the natural world. Through their application of awareness of an inter-connected reality and their unique processes, their work transcends the very world that inspires it.

Included in this exhibition are works from Michael’s series, Arctic Metamorphosis. Their vast, white empty spaces recall an icy desolation and are punctuated with wound-like divots and abrasions. Despite this seeming inhospitable ground the surfaces sprout new growth in the form of plants that need little in the way of nourishment to thrive. Beaten and scarred industrial plywood is rendered natural and elemental once more from his very human effort to shape reality. Michael states that he is addressing the evolution of the natural world, the new growth that happens even as the destruction of global warming takes place.

New works from Aline Mare’s Cryst-aline Series and Cloud Seeds will be on view as well. Aline incorporates the minutiae of existence – seed pods, stems, and leaves (all captured in extreme detail) on a backdrop of the expanse of the atmosphere – weather images from NASA and hand painted backgrounds. In rendering this level of divine precision against transcendent, color and texture she gives us a vision of a beautifully infinite and complex backdrop against which the details of the natural world play out.

Oswald, also production designer of The Angry Birds Movie, invites Santa Monica art enthusiasts to explore his painting interpretations of the West Coast in his debut show. His inspiration for the show is the California coast he has lived next to and grown fond of since moving here from his native Bountiful, Utah to study at Loyola Marymount University. For his animation and illustration work, Pete draws on his fine arts background, which captures his observations in an impressionistic yet at times graphic style.

This is a one-night-only pop up exhibition

More than 300 artists will make the final MAS Attack at the Torrance Art Museum the biggest show of this innovative exhibition series.

MAS Attack events, hosted by ARTRA Curatorial, started with 100 artists at the LA Mart in 2013. The intention was to build community among artists. Artists were invited to participate through open calls on Facebook. They showed up at the venue with work under their arms. Nothing could be bought or sold. The shows were free. And over the years, artists in Los Angeles got to know one another.

Artists are being encouraged to dress as if going to a funeral. Jay Lizo will DJ. At the end of the night, artists will take their art off walls and pedestals and walk away from the party that was MAS Attack for a last time.

ARTRA Curatorial, which also includes Colton Stenke and Kio Griffith, organized eight of the MAS Attacks in the Los Angeles area, including one with 200 artists at the Santa Monica Art Studios, and five outside of L.A.: San Diego, San Francisco, Las Vegas, Albuquerque and Tempe. The MAS Attack idea was born after conversations between Presneill and painter Mark Dutcher about ways artists could support artists. Dutcher remembers the first MAS Attack in 2013 as an “the instant feeling of community.” 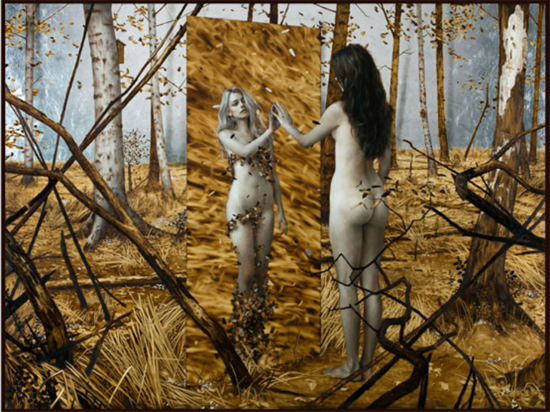 The show will feature a body of entirely new works in the Artist’s signature gilded technique. Kunkle paints his compositions in layers of precious materials, such as gold and silver, achieving an entirely unique effect through luster and depth.

Start at Samuel Freeman…If you were a gay man in 1965, the world was a lonely place. At a time when being openly gay was still a crime, finding spaces in which to meet other men was a challenge.

See image: The cover of Bob 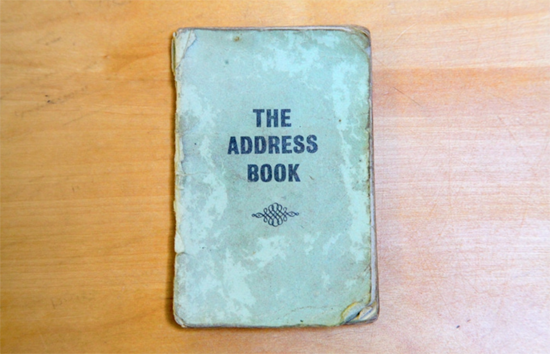 In 1965 Bob Damron published the first in a series of yearly “address books”, which secretly listed every gay restaurant, bar, café, sex club and bathhouse in each major US city. Coded in a language that only gay men could decipher (1), the books helped to connect individuals and create a sense of community. Today, Bob Damron’s address books serve as a cultural archive that tells a story of the transformation of gay culture in the US, and it’s influence on our contemporary landscape.

Using the address book as a starting pointPiss Elegant / Some Motorcycleis a phantasmagoric attempt at reconstructing Damron’s address book and the spaces it lists. Throughout the exhibition,Danny Jaureguimakes the invisible visible by layering, folding, removing and ultimately revealing the presence of absent bodies and spaces. Through painting, print, sculpture and an expanded version of the address book, Jauregui reveals the erasure of queerness from the psycho-geography of Los Angeles. 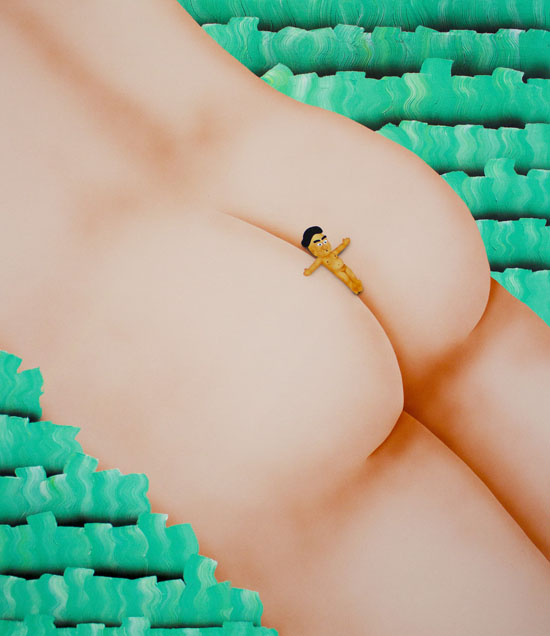 Zevitas Marcus celebrates new paintings by Sean-McGree Phetsarath with an opening reception for”You Play B-ball? Why You No Play A-ball?”

Provocative and playful, Phetsarath’s work daringly defies traditional values while exploring the conflicts generated by the mutability of contemporary culture. Combining the absurdity found in digital media with his own personal anecdotes, Phetsarath creates a fantasy world that portrays a unique and humorous perspective on his Asian-American childhood.

s  back Audrey Kawasaki for her first solo show in two years and one of her largest collections of new work in some time.

She’s turned a corner stylistically with the new work and has really pushed herself to rethink her creative process and challenge her technical execution. The new works just sing, they are so strong. To think we have been working together for over 11 years now is really something else to look back on, and to see how far she has come and how many have grown to love her work the world over is just an amazing thing to have been a part of. We are very, very honored to be showcasing this new body of work for her and can not wait to share them with all of you this weekend. 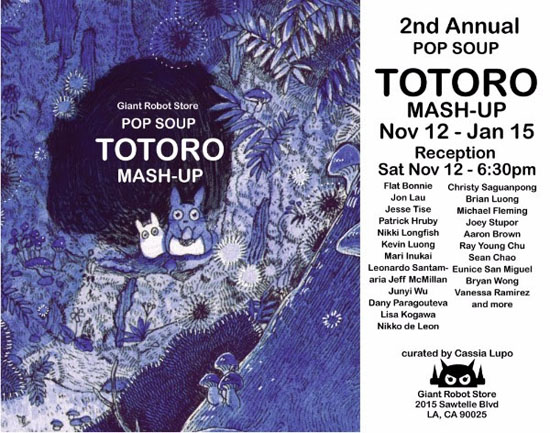 “From Inside,” is the latest solo exhibition from Joe Sorren. Drawing on the layered physicality 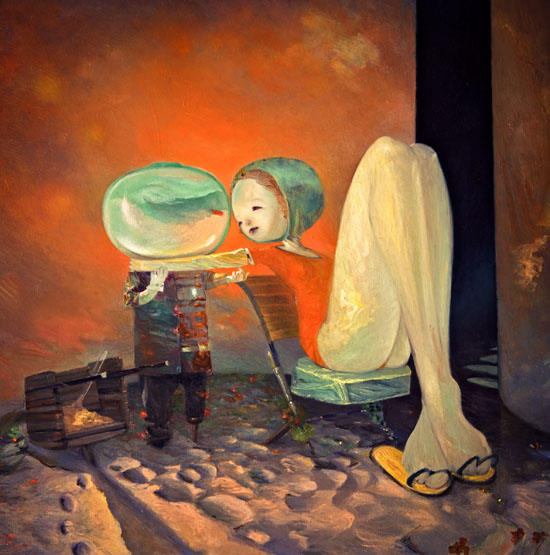 of brushstroke and vibrant color pioneered by Post-Impressionists, Sorren captures the romantic energy of swirling brush strokes with contemporary nuances to convey his feelings and state of mind in narrative form. Using layers of paint sometimes 5 layers deep, the internal energy of the artist and characters emerge from the paint itself; a nod to the exhibition’s title.

This is a special show for Joe Sorren, as his pieces become available to the Los Angeles audience to view for the first timein 10 yearssince he moved to Europe. They really are as charming and mysterious as ever.

Also enjoy a stunning new show from Dorian Vallejo titled “Forward With No Sound At All.” Growing up in an artistic home as son of renowned illustrator Boris Vallejo, Dorian’s lifelong study of the figurative process shows strong in this exhibition.

if so, head North on La Brea Ave…

The Jack Rutberg Gallery welcomes Music & Conversations back for a performance. The Lyris Quartet will perform some traditional and new music amongst its current exhibition, “Surreal / Unreal.”

There is a charge for the evening. Enjoy complimentary wine from Casa Torelli Imports and to experience Jack Rutberg’s latest exhibition. Grammy winner Billy Childs’ new quartet will perform.  Music begins at 8.  Approximately one hour of music, with no intermission. his unique formula works! Music & Conversations, Inc. is a 501c-3 tax-exempt charitable organization made possible by the generosity of its audience.

From the artist/gallery: “A curious thing happened to me along the way. The year- well there were no years. Long before measurements of any kind had arrived. But I did arrive, during the Paleolithic era it would later be termed. But I arrived as any spirit arrives, I appeared. Driven by a nanosecond moment, curious by a fragment of light, and boom. A sizable boulder was forming and I was instantly trapped, smothered inside of the boulder. It took me maybe 10,000 years to make my way out of this rock. I culled quite a language. Visions and sounds before me. Air, molecules, and space became my universe. A keen desire (to find light) I weave myself through atoms, forming a deep connection and eventually an ally with ‘the interstitial’. As it was this process was achingly slow but thorough. It took the full term, the 10,000 years, to make it from theRock to the Light. The Light itself has the same challenges with just different names. I am reminded of this journey these days and I search for the tiny villages within the Rock and the mirrored villages within the Light.”