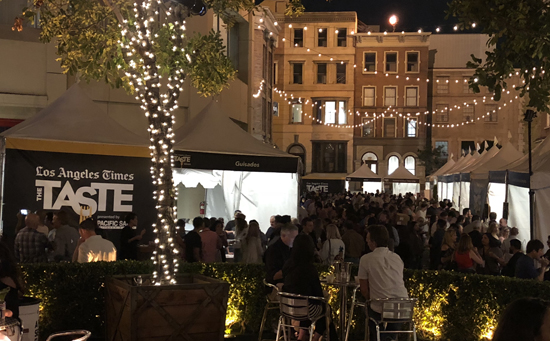 The late Jonathan Gold once said, “Food is a pretty good prism through which to view humanity,” and he was right. Gold has been a constant at the LA Times the Taste. He loved to interact with his audience. Year after year, I’d see him at the annual food event, and he’d always ask, “Are you having a good time?” A beloved food critic icon, he was down-to-earth and approachable as he stopped to talk with his fans.

The 2018 event once again brought foodies together to not only celebrate food, but to pay homage to Jonathan Gold’s life. The annual event honored the Pulitzer Prize winning writer with a variety of tribute dishes as well as a life size sign featuring the words of Gold’s famous social media post – a photo of a crumpled napkin which read “Five Rules for Dining in Los Angeles.” Attendees posed for photos with it, along with another large artwork in progress, created by a local street artist Devin Liston @devinliston (curated by Branded Arts, @brandedarts) over the course of three days.

The layout was different this year – all of the booths were situated on Paramount’s New York stage, with several new lanes added to accommodate all of the restaurants. I preferred it over last year. It was nice to have everything in one area.

Upon entering, I noticed Nerano was offering Gnudo Pasta with Chanterelles (butter sage sauce, black truffle). A huge fan of Italian food, this was a provocative, well thought-out dish. The mushrooms were rotund and robust and the black truffle took my taste buds on an extended vacation. I paired it perfectly with a 2016 Uncaged Pinot Noir by Z. Alexander Brown.

I was impressed to see the legendary restaurant Pacific Dining Car, which created a tribute dish for Jonathan Gold. President Wes Idol was there and told stories of Gold’s dining adventures at the longtime LA institution. “Jonathan Gold loved our dry-aged steak for it’s fine pungency and our ‘massive’ (his word) martini,” said Idol. 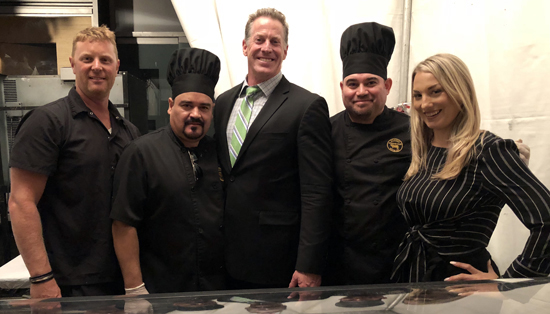 Media Director Conlee Idol said, “This is our first time participating in Taste LA, and it’s a joy ride. It’s wonderful to get to talk with people who have been coming to the Pacific Dining Car (a restaurant our great-grandfather opened in 1921) for decades, and to introduce young people to the venerable steakhouse. My brother and I are proud to be a part of this city’s history and foodscape.”

Nong Lá Cafe featured two tantalizing dishes. The Braised Pork Belly over Rice had the most flavorful sauce. I could have just eaten a plate of rice with just the sauce on top…it was truly something special. The second dish, the Chicken Cabbage Salad provided a distinct contrast.

I tasted a delightful medium bodied red…Purple Heart Wine is a collaboration between the Mondavi Family and the Purple Heart Foundation. The best thing about purchasing this wine is as you enjoy it, you know you are giving back to an organization that serves the unmet needs of military men women and families. 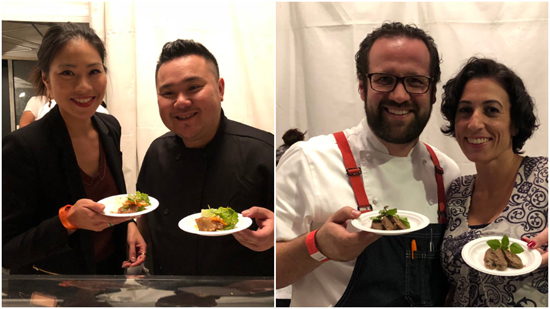 Crustacean Beverly Hills is a favorite restaurant of mine. I was honored to meet Owner Christine An (House of An) who was helping Executive Chef Tony Nguyen to distribute dishes of scrumptious Bún chả. I also met the Bellwether‘s owners Chef Ted Hopson and Beverage Director Ann-Marie Verdi who were sampling a delectable lamb sausage and baba ganoush. These two partners obviously have a passion for food.

Other stand out tastes came from Hinoki & the Bird, Poppy & Rose, Pearl’s BBQ, Woodley Proper, Bone Kettle, Mainland Poke, and Mexicali Taco & Co. Blue Ribbon Sushi Bar & Grill had a long line all night, so alas, I never got a taste…but I heard it was worth the wait. Instead, picket fence‘s District Manager Cameron Cotton was on hand to offer solace by pouring me a lovely Russian River Pinot Noir…it was quite tasty.

On Saturday, several restaurants were back. I had another opportunity to sample two of my favorites – Gus World Famous Fried Chicken, and Coni’ Seafood. I absolutely loved the paella prepared by Chef Mark Peel of Prawn Coastal. Another tribute dish in honor of Jonathan Gold was prepared by Herringbone. The Snapper Ceviche (chilis, citrus, ají amarillo, and nori chips) offered a firm, yet delicate texture layered with citrus and spice. Jonathan would approve. 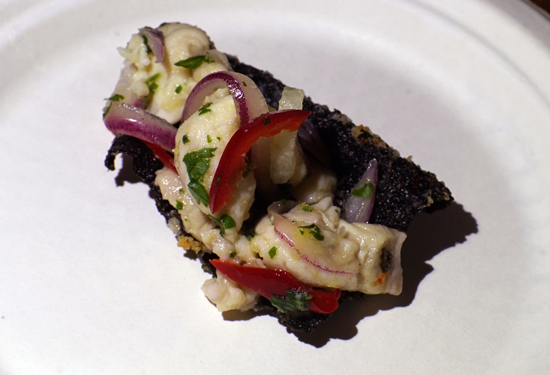 A Snapper Ceviche, a Jonathan Gold tribute dish from Herringbone

In addition to all the glorious food, there were two stages offering demonstrations and clever presentations such as 101 reasons to drink wine. Although I do not need a reason to drink wine, it was an interesting concept, hosted by Sommelier Ira Norof and J. Wilkes Winery‘s Wes Hagen. Speaking with the latter, he commented, “As a third-and-a-half generation Los Angelean winemaker, I must say that Taste LA is a projected microcosm of what I love about the LA drinking and food scene.” The presentation was standing room only. He added, “I would be remiss if I did not mention the homage and love for Jonathan Gold that permeated the event. I think he would have been proud and we all certainly miss him.”

While indulging in an exquisite oaky pinot from Bernardus, I heard a lot of commotion happening at the LBK Studio City booth. As I drew closer, I saw a massive crowd surrounding the booth while fresh pizzas were coming out of the oven. Tony D’Aiuto (Chef, NY partner) and his tight knit crew were obviously having a great time making pizzas on the spot. 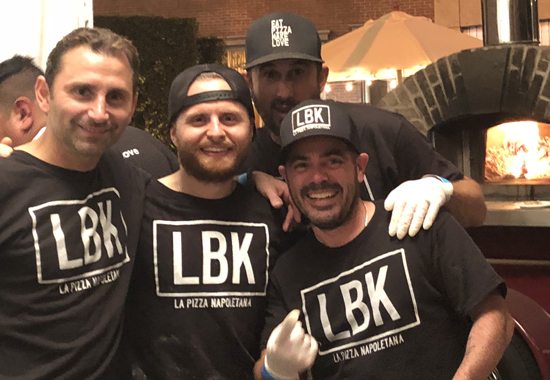 My heart jumped when I saw Eataly at the event. Lines for this popular new-fangled Italian marketplace located at Westfield Century City were fast moving, but consistent throughout the night. This part dining/part upscale food store phenomenon was founded in 2007 (in Italy) by Oscar Farinetti and has spread like wildfire throughout Europe and beyond. With over forty locations to date, the European-style open market format has set a new standard for the franchise restaurant model by taking it to an upscale level with celebrity chefs owning different locations.

The company represented their authentic Italian brand perfectly by serving Bombolone Gelato. This Italian warm doughnut (with dough being prepared right in front of us) was baked at the booth, rolled in sugar, and then filled with a large dollop of gelato. The staff had a great time as they feverishly kept up with demand…they were flying off the table. Two varieties were served…fiordilatte (sweet cream) or cremino (hazelnut & chocolate), and they were both fantastic. Many of us went back for more…after all, I had to – I am a food writer. The warm fluffy dough with delicious gelato was definitely worth every calorie.

Day three at The Taste proved to be just as spectacular. I had a planned out route this time. My favorite samples came from Guisados, Jitlada, Noree Thai, Momed, Takami, and Yardbird.

I was on a mission to try it all, when a rib by Bourbon Steak beckoned to me. The Pomegranate Pork Spare Ribs were unbelievable. With a crisp outside, it offered a crunch, with a warm mouthwatering center.

I continued on my journey…but stopped in my tracks when I saw what Lalibela was dishing out. Ethiopian specialties Doro Wot, Gomem, Miser Wot, Kim Aletecha…all on one plate. What a beautiful union of savory flavors! They also handed out Sambusa (savory pies stuffed with lentils grilled onion jalapeños and herb fillings) as if that was not enough. All were vegan with the exception of Doro Wot (chicken stewed in berbere sauce), and were a delight to my taste buds.

I hit another detour when I spotted Chef Nickolas Longcar of Avec Nous, who I recently met at another food festival. He served up a delicate Lyonnaise Salad with Duck Bacon and Yolk Caviar.

I tried to make up for lost time as I weaved through the crowd. I quickly grabbed a sample of beautifully displayed meat on an open lettuce leaf from Inko Nitto, and kept moving. I rolled it up like a taco and started nibbling as I continued on my way. My body jerked as I suddenly switched directions. I had to find out what I was eating – it was unbelievably tasty. To my shock it was Beef Cheek (with Korean miso and pickled daikon). If I had read the menu, I would never have tried this unbelievably sumptuous dish. Perhaps it was the 2014 Cabernet Sauvignon from Jordan (Alexander Valley) that distracted me. This Bordeaux-style wine was smooth with notes of oak.

Additional wines provided by Groth Wines, Spring Valley Wines, and Polvara Tenuta all rounded out my dining experience. Needless to say, there were all types of spirits to be had, but I can only attest to the wines I sampled which proved to be a delicious pairing for my food choices at this annual feast. 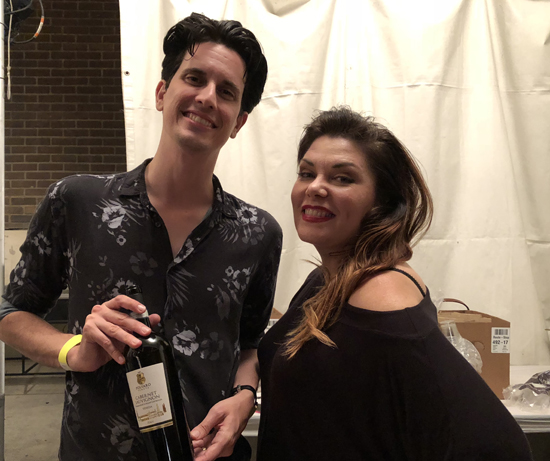 All three days were fantastic. Although we all missed seeing Jonathan Gold, somehow I knew he was there strolling through the New York stage backlot of Paramount Studios, taking in the atmosphere and aroma of all those foods that he so loved. Everyone I spoke with at the event said they had a great time…Jonathan would have wanted it that way. If you are a foodie, you won’t want to miss it next year. http://extras.latimes.com/taste/