bG Gallery presents a solo exhibition of photographs by Ryan Schude. The “tableau vivant” is an originally French style of photography that came to prominence in the late 19th century. Schude expands on this form and creates his own “living pictures” of absurdist snapshots featuring elaborate set-pieces of modern life laden with personality and humor. 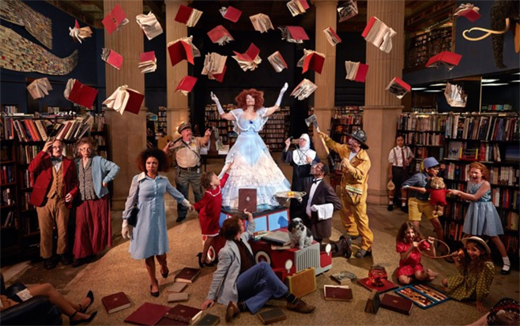 Schude creates large-scale, single shot tableaus packed with people, mingling old-fashioned Americana with contemporary personality and humor. Looking at a photograph by Ryan Schude is like seeing time compressed, with casts of performers interacting together chaotically and beautiful leading to an “everything now” aesthetic for the digital age.

In 2018 Ryan Schude recreated Norman Rockwell’s “Four Freedoms” for Smithsonian Magazine with his take on American culture and also won Rangefinder Magazine’s Grand Prize. He has recently shown work at SFMOMA that incorporated museum staff, as well as many other exhibitions at other prominent galleries and museums around the world.

“As we create a new reality based only loosely on a collection of muddled memories and inspiring aesthetics anything goes. Everything is possible.” -Ryan Schude