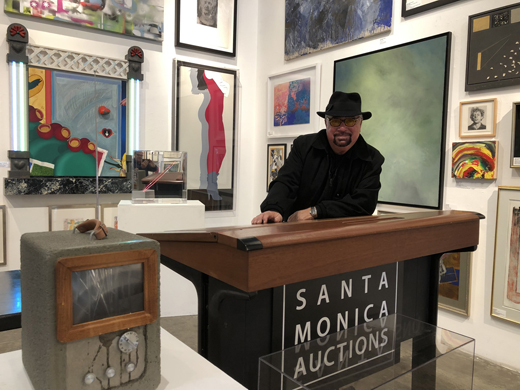 It was Christmas day in 1983. Artist and fashion designer Claire Joseph was waiting to catch a subway in New York City (Penn Station stop). She was currently in art school and was headed downtown to Christopher Street. She noticed an original Keith Haring on the wall. Back in the 80s, advertising agencies would paste up posters all through the New York City subway system. Once the ad time was over, a piece of black paper was glued over it. Haring frequently claimed these black back-drops to create his well-known chalk drawings all over the city.

Joseph had always admired his work. Like many others, she had attempted on prior occasions to acquire one. “I wasn’t the only one, everyone was trying to pull them off,” said Joseph. She casually tugged on the end to see if the artwork would easily lift up. This time it did. “It was a cold day, recalled Joseph. “I think the glue had frozen, and it just popped off.” That was her lucky day. She scrambled off with her treasure…it has been hanging in her home ever since. 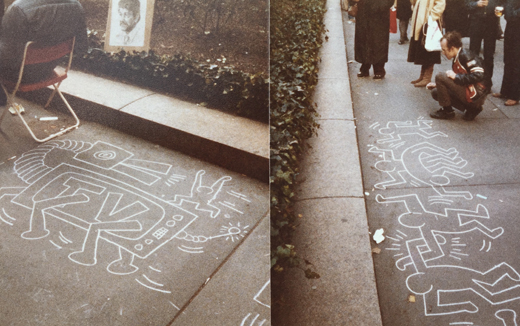 Just about a week later, Claire would meet Haring when he was drawing in front of the New York public library on 42nd St. She was with her mother who approached Haring asking, “You never erase do you?” He confirmed. Then she added, “You’re like Picasso.” Haring went on to engage in a forty-minute conversation about art with the pair. As mothers can’t help but offer too much information, she revealed that her daughter Claire loved his art so much, that she peeled one of his works off of a subway wall. He smiled. Joseph said, “I was embarrassed.”

The artwork was recently part of the acclaimed “Beyond the Streets” exhibition curated by Roger Gastman. Joseph was helping to install the exhibition “Art in the Streets” at MoCA Los Angeles, curated by then-director Jeffrey Deitch and associate curators Aaron Rose and Gastman. During the installation, Joseph casually mentioned to Gastman, that she had her own original Haring. He would later approach her about exhibiting the work in his next show, “Beyond the Streets.”

When asked why she decided to sell now, she explained that living in the Angeles Forest area, she has had to deal with several close calls with fires coming very near her home. “The first one I could barely get my children out,” said Joseph. After another close call, she felt like it was a liability to keep the work and thought it would be better to sell it. 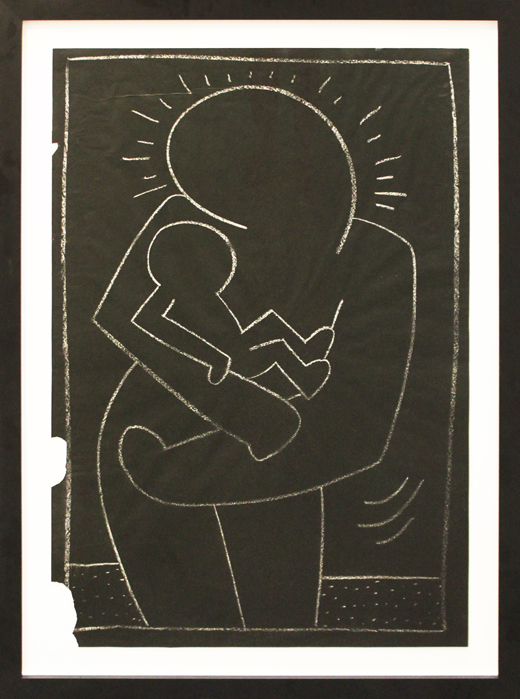 She has known Robert Berman, owner of SANTA MONICA AUCTIONS, for many years and approached him five days prior to his auction on March 3. Needless to say, Berman said he was very excited to auction the work. “This is a masterpiece by Keith Haring. I believe the work will sell between $160,000 to $200,000.”

Joseph said she enjoys collecting art and will continue to do so. “I would like to find a good home for it.” She added, “I will miss it.”

Stop by the gallery to see auction preview at the B-7 gallery at Bergamot Station (Tues-Saturday 11-6pm). It will remain open until 8pm on Saturday, March 2, 2019. Find out more by emailing info@smauctions.com or calling (310) 315-1937. In addition to live bidding, bids will also be accepted by phone, or via the internet with the catalog continuously being updated. For more information about the SANTA MONICA AUCTIONS, or to view the full catalogue, visit http://www.smauctions.com/