Skip to content
On View Now: LarkGallery Presents “Creative Edge” and “Finding Me”

See image: When the Light is Awaken by Lark, Acrylic on board 8 x 8″

Lark Larisa Pilinsky said she is looking forward to participating in the group exhibition. The piece she will be showing is titled “When the Light is Awaken.” She explained that her artwork was inspired by the morning light and how it affects its surroundings.

Artist Michael Baroff will be exhibiting two of his Metascapes. For the past forty years, he has been creating art…working in all types of media. “I am currently doing series of emotional portraits, expressive nudes, and dancing gestures. About 7 years ago I began using video to record unscripted visual scenes, ambient sounds and overheard talk that can be viewed from a range of stylistic perspectives including abstract, scenic, narrative, meditative, or social commentary.”

Baroff has been painting Metascapes since the early1980’s. “Metascapes explore the transitional space between realism and abstraction where a dream-like inner meditative quality can emerge. Metascapes are certainly, on one level, seascapes, and yet again they are not, for the images are created without reference to any actually viewed scene, the horizon line can be perceived to be the illusory boundary for what may be above and below the surface of our awareness.”

Photographer Huss Hardan will be exhibiting work in the group show. One titles “The Concentric Dance,” part of his Liquid Gold series was shot last year. Hardan revealed that he wanted to celebrate water in the time of drought. “I used 35mm film and processed it in such a way to stylize the water, giving it a painterly impressionistic look. http://metascapeart.com/ 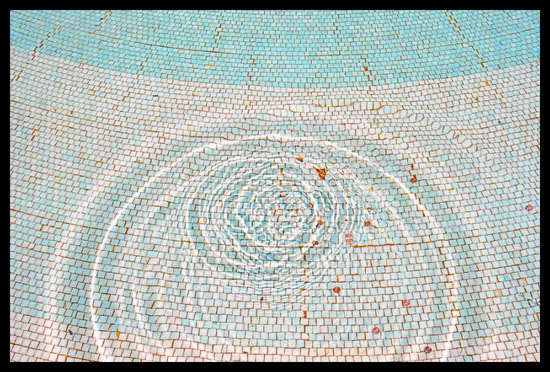 Hardan has been taking photos his entire life, but has moved to a professional level in recent years. “Film facilitates that as it gives the image an organic look, deliberately lacking the hyper realism that digital imagery can impart.”

Like most artists, Hardan works in series…”When I choose a series, I brainstorm to think of a new creative direction. I try not to repeat my past work as I want the audience to see something fresh. These ideas usually come to me when I am engaging in some kind of solo physical activity whether exercising, riding a bike or skateboarding. I find that when the body becomes invigorated, the mind follows.” For more information about the photography of Huss Hardan, visit his website at http://husshardan.com/

LIbbet Loughnan will also be participating in “Creative Edge.”  Loughnan’s work “Sydney’s Bondi Beach” is set to be part of the group show. She said it was inspired by a very long lazy afternoon with friends at Bondi Beach. “This place, the ‘Icebergs’ pool on Sydney’s bondi, is a great place where the Pacific Ocean crashes into a public pool. It literally is a creative edge, with sea water churning over the side, slopping down and then calming in turquoise equilibrium. And it can be a breathtakingly beautiful and fun place in which to spend a summer’s afternoon.”

Loughnan said she art is an important part of her life. “Art can easily open up new space, stop things being too locked down. Like comedy. And like kids. Like life. Helps me take things less seriously, while getting at the beauty of things.” http://www.libbetloughnan.com/

Barbara Mastej will have a artwork titled “Alchemy” in the show. 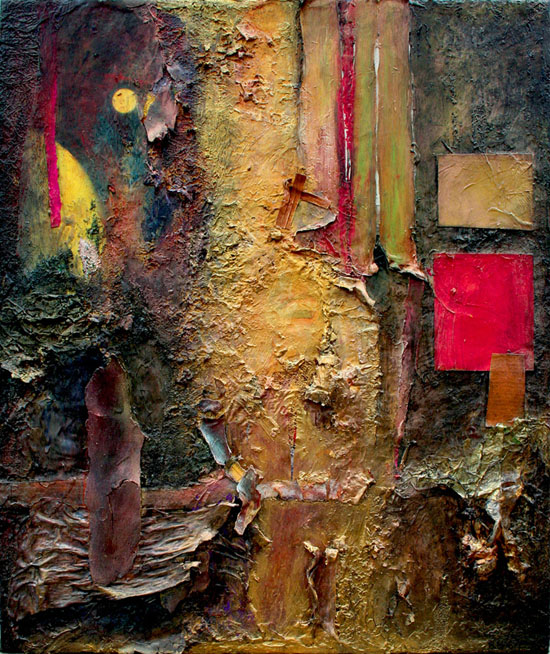 She explains, “The term ‘alchemy’ refers to the medieval process of turning base metals into gold. When a friend of mine gave me a mass-produced painting on canvas destined for the trash, I repurposed it to create my own piece. I cannot say where my influence or inspiration came from. Instead I see it as a direct emanation from some Universal flow of energy and knowledge. Much of my work is more up-front. This one conjures up mystical formulas.”

John Ransom also contributes works to “Creative Edge.” Ranson offers the story behind his piece. “Build the City Not of Sand” is a social comment on the general short sited decisions made in our society, due to unchecked motives and compulsive self-gratifying behavior. Please let us think before we act, lest we come to unwise conclu 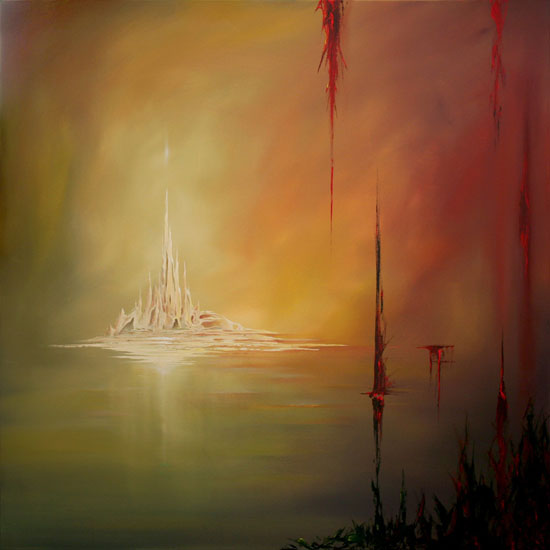 sions. Other than that, it’s a pretty picture…as characteristically painted for the masses. http://www.johnransomla.com/

The opening on August 27th was fantastic with live music performed by Pashyo Sarkin and some of her bandmates from SangomaBeat. http://sangomabeat.com