Skip to content
FAB-gallery Presents the “End of Summer Show”

Summer is a nostalgic time of year. At the end of spring, so many of us relish the thought of it. We anticipate the laid back season as it’s on the way by making plans and promises to ourselves that we will take some desperately needed time off. We spend time with family and friends, but soon August is upon us…time to say goodbye to our precious summer. Let us look back and celebrate our memories of this glorious season!

The “End of Summer Show” pays tribute to the memories of summer.  We had a fantastic opening – and sold some work as well. Obvious Wines offered tastings…I recently met Venice local and owner Brice Baillie and fell in love with his wine. If you would like to see the show – call 310 630-9216 to see the exhibtion….it is by appointment only. 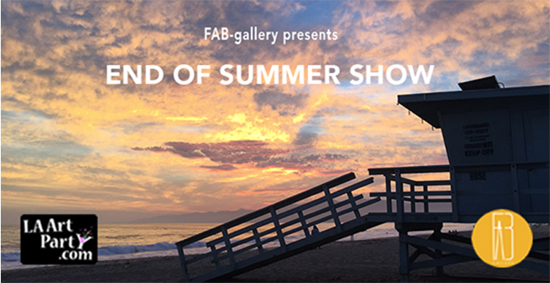 Artist Michael Baroff, a longtime Santa Monica resident said he is looking forward to being part of the group show. “Summertime and the livin’ is easy,” said Baroff…”especially when living near the ocean.” Summer for Mark Castator brings to mind surfing, flying, dinners with friends, Drinking Rose, heirloom tomatoes, photo shoots on the grand canal bridge, Game of Thrones…finally. Wood sculptor Ray Ford will be exhibiting his intricate works of art. “My favorite things about summer are warm temperatures and long bright days. It’s the time for new inspirations for my wood art and fulfilling them.” Artist Marianne R. Klein said, “One of my summer’s highlights was an email from my publisher who said that my book All the Pretty Shoes by Marika Roth (pen name), had been receiving great reviews. As such, they will now release the book in hard cover. I couldn’t have been more thrilled!” Here’s mixed media artist Barbara Kosoff’s summer inspiration: “Toes in the sand at Santa Monica beach, picnics and concerts at the Hollywood Bowl, and two weeks in Paris soaking up art, food and tango.” Painter Meryl Lebowitz added, “I love the late afternoon light.”

This summer, Stuart Marcuse celebrated his 80th birthday on a cruise to Seabourne, to Alaska and said the glaciers were magnificent. “It was so quiet and the colors of the glacier from turquoise to grey was awesome and then one heard the sounds coming from the Glacier as it moaned and cracked as some of its ice gave way.” Artist Don Paonessa cites childhood memories of shimmering blue water, sunbaked sand, volleyball, bodysurfing, salt on suntanned bodies, Sorrento Beach, parking 25 Cents, Sorrento Grill burgers 50 cents…summertime in LA. Linda Selling revealed “Summer for me is languid mornings with iced coffee in the garden and coming home late from the beach.”

Last, but not least, curator/artist Flavio Alejandro Bisciotti will also exhibit works from his show “Objects From the Ashes.” Born out of a tragedy, this show is a continuation of the acclaimed exhibition “Palimpsest.” See my Huff Post review about the original show.