Hope you all had a fabulous 4th of July….I certainly did. I spent the eventing on a rooftop in Venice. It was quite incredible, we saw about 10-12 different firework celebrations all across LA. From Malibu to what we thought was Century City, but it could have been further. Who knows. we were all guessing. My favorites were Malibu, Palisades and of course Marina Del Rey. 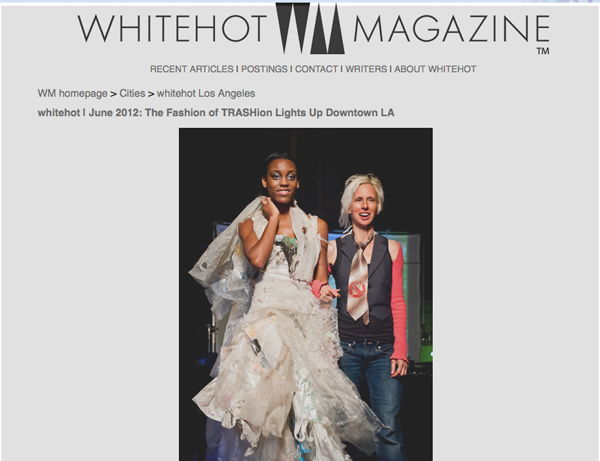 If you haven’t heard yet…..(yeah, I know I’ve got a pretty big mouth), I am very excited to say, Whitehot Magazine just published a fashion (wearable art) article that I wrote. See the Fashion Page for all the details. The fashion show was dubbed The TRASHion show and was a wildly eccentric event taking place underneath a freeway in a seedy part of town, just east of Downtown LA. Whitehot is an international Art Magazine and I am pretty jazzed….so be sure to check it out.

Now lets get down to business….the business of art and of course, partying! On this holiday week….Keep the party going all week long with a fun art party at Corey Helford Gallery. This Saturday, Corey Helford presents a double solo exhibition by iconic artists Colin Christian and RISK.

Internationally known for his glamorous sci-fi-esque female figures crafted from fiberglass, Christian describes his aesthetic as “optimistic futurism with a giggle.” His large-scale sculptures capture beauty in many forms from futuristic portraits of Cleopatra and Hello Kitty to ultra-mod Orbit Chairs made from fiberglass, steel and faux fur. 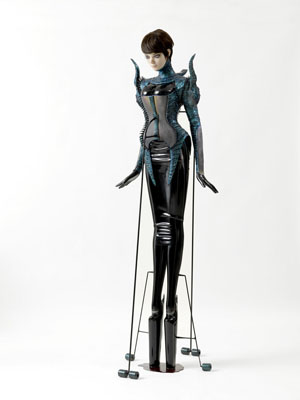 Hello, Pretty Pretty,” Christian will unveil twelve new pieces, featuring luxe textures that incorporate glitter and sequins as well as darker overtones addressing transhumanism. He adds, “I wanted to push it as far as light and dark goes, both figuratively and literally.”

A striking blend of fashion, 60s pop art and 70s interior design, “Hello, Pretty Pretty,” references a wide range of influences from Christian’s life. He notes,”‘Zoofy’ was inspired by my sister-in-law’s traffic accident. It features a gothic corseted girl in eighteen-inch heels with a metal support frame on wheels so that she could walk. Another piece, my first major black figure, ‘Superflyhoney’ is a nine and a half foot tall, 70s inspired futuristic girl. Wearing a painted on rubber cat suit with giant space flares, she is based on my love of 70s soul and disco.”

Following an outdoor installation at the London Pleasure Gardens and UK gallery show on view this summer during the 2012 Olympics, graffiti artist RISK joins Corey Helford Gallery to debut “Old Habits Die Hard,” his first solo exhibition at the gallery and his most comprehensive to date.

or the show, RISK returns to his graffiti roots with a series of traditional work that celebrate his iconic lettering style, self-described as “organized chaos.” He adds, “although I’ve been painting with many different mediums and aesthetics, the majority of the new pieces in this show are variations of RISK pieces.”

The collection of new paintings is organized into groups, allowing RISK to have chapters in his repertoire, rather than just one story. The show is made up of traditional pieces on various surfaces and textures, the new “Beautifully Destroyed” series on plaster steel frames, and “The Symbol” and “Good Times” hand series, which recently debuted at SCOPE NY. Additionally, the exhibition showcases recent sculpture collaborations.

For “Elephant in the Room,” RISK partnered with artist OG ABEL to create a large-scale elephant figure with a vibrant pink glitter glaze, and for the “Pigs” series, RISK teamed up with low-rider artists Danny D, Emmanuel Cisneros, and Vince Felix to paint custom finishes. 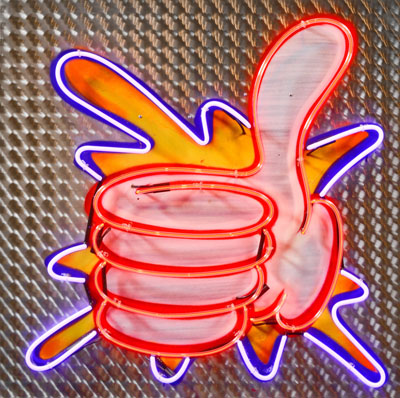 always the opening reception for “Hello, Pretty Pretty” and “Old Habits Die Hard,” takes place at Corey Helford Gallery and will be a hoppin one. The reception is open to the public, and both exhibitions will be on view through