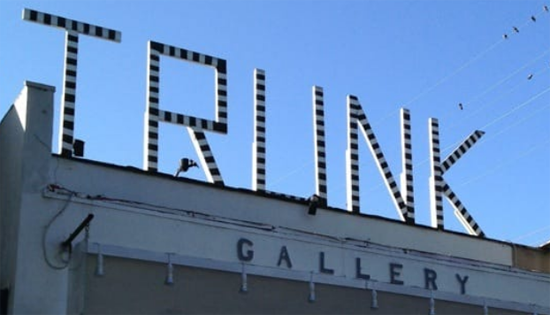 “Real Talk,” a silent art auction and exhibition opened on Saturday March 30th. The special benefit and auction was created by high school students to raise the much needed funds for Oakgrove, a human relations retreat program based at Venice High School. Lili Raygoza first approached Ann Perich, owner and director of Trunk Gallery, who thought it would be a great idea. “Being in such close proximity to Venice High, students are always walking by, and some of them do come into the gallery to check out the shows.She adds, “There was alot of interest in the last show, “Interactionism: Metamorphosis”, because it was so interactive.” The exhibition featured  group of work was an eclectic mix. In addition to the Venice High School students, several professionals and community artists, including Nick Busco, Raffaello Grimaldi, Scott Tansey Michael Temple, Keiden Oguri and Joshua Hernandez donated work.

Artist Michael Temple, aka Mike Tempo…creator and percussionist of the World Beat band The Bondaddys also has agreed to donate one of his paintings to the cause.  Temple paints everyday. He explains, “Although I began to develop my visual language 40+ years ago (Lower-glyphics), it took me a while to develop enough confidence to trust it. Now I do trust the shaman within; and with my visual vocabulary, the rhythm in the performance and the alchemy of paint, I create my view of the cosmos.”

The exhibit will be on view through April 26th. The work includes painting, photography, video, sculpture and mixed-media. The silent auction will conclude with a closing art party on Friday, April 26, from 6-9pm. Highest bidders do not need to be present to win.

Photographer Nick Busco donated work for the cause. Busco spent many years working for Tom Fields and Associates, a rock lighting company. He’s had the chance to work with many legendary musicians through the years. He has toured the world as part of rock’s most infamous road trips with access to stars that many can only dream of. Working closely with renowned performers such as Freddy Mercury, Bonnie Rait, Tom Petty, Rod Stewart and more, he has captured classic images. Busco currently has his work featured at Mouche Gallery in Beverly Hills. http://www.mouchegallery.com/ http://nickbuscophotography.com/

Scott Tansey has also donated a framed photo for the Oakgrove benefit. Tansey’s most recent trip to Patagonia inspired him to capture incredible images of mountain ranges, icebergs and rarely captured landscapes. A dedicated photographer, Tansey has traveled the world in search of magnificent landscapes. Always working on his craft, Scott has some interesting plans on the horizon….

“I am working on several projects: Los Angeles Overlooks, stitching and post processing images from my Zeppelin Ride over California, and processing images from the High Line in New York City and from Rockland Harbor in Maine. Today, I took some images of the interior of the Catholic Cathedral in Downtown Los Angeles. The interior is amazing,” comments Tansey. Scott Tansey’s panoramic phototgraphy is currently on view at Figtree’s Cafe. http://www.scotttanseyphoto.com

Oakgrove is a human relations camp at Venice High School that was founded in 1972 in response to the Watts riots of the 1960s. It is a place for Venice High students to speak freely and openly about themselves and their feelings without fear of judgment. The Oakgrove retreat is organized and run by students of Venice High. This unique approach is an integral part of Oakgrove’s model of sustainability. (www.veniceoakgrove.org)

Finally Perich adds, The students that organized the event were extremely happy. Not only were they able to see all their hard work and efforts over the past two months come together in a well-attended evening, but on a more personal level they received praise and compliments on their own artwork which was on exhibit.

“It was a very successful opening,” said Ann Perich. “Some of the art was sold at the “Buy it Now” price so people were able to take home the artwork.” The exhibition will be on view: March 30 – April 26, 2013 ; $5.00 suggested donation; http://trunkgallery.org