Our Pick of the Week, takes place this Saturday in West Hollywood….If you’ve ever been to an opening at Leica Los Angeles, you know its a fantastic art party featuring the brilliant work of established photographers.

Leica Los Angeles opened in 2013. Unlike its other locations around the world, the Los Angeles location offers a beautiful gallery. It has been hosting art openings and showcasing well known photographers since inception.The openings are often attended by celebrities and Leica camera aficionados. Past exhbitions have showcased the work of celebrity photographers such as Mary Ellen Mark, Seal, Yariv Milchan, Astrid Kirchherr, Andy Summers, and more.

“Everything is meant to inspire great photography and photographers, said Gallery Manager Annie Seaton. In my experience, it is a very exciting concept.” The idea was spearheaded by Roland Wolff, VP Marketing Leica Camera USA and Karin-Rehn Kaufmann, Art Director of Leica Galleries International, and has proven to be a worthy marketing maneuver. James Agnew, the General Manager who oversees Leica Store LA is also an important part of the team.

Seaton is also an artist and photographer who owns a Leica D Lux 6. “I bought one after exhibiting Gridlock from Sara Jane Boyers, a photographer and artist I admire and collect.” Seaton explained that Boyers used a D-Lux camera system to shoot the installation, which prompted her to purchase one. She added, “I love the ease of use and the quality of the image. Sara Jane made 24 x36 inch prints and the image quality was phenomenal.” 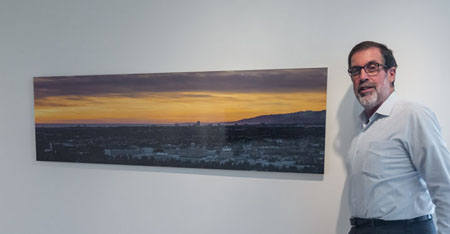 Photographer Scott Tansey, whose work will be featured at Leica Gallery on August 2, agreed. “The Leica S2 is the greatest camera I own for the work I do,” said Tansey. “It has expanded my ability to do panoramic images. It is a well-designed camera that is easy to translate my ideas into great images.”

Tansey’s solo show titled “Los Angeles Panoramas” will feature five panoramic images stitched together. His new series was inspired by his love of his bird’s eye view of the Los Angeles basin. The photographer often visited the same general location at different times of the day…allowing the light to dictate the chemistry of his subject.

He was first inspired to shoot in his hometown of Los Angeles back in 2008, but seriously considered creating a series in 2010. “On a clear day, the LA Basin is amazing,” said Tansey. “One can see the mountains all the way to the ocean. It is unusual to have a mountain range running through the middle of a city.”

Tansey said he was excited to show his work at Leica. “Like everything else about Leica, the venue is first rate,” said Tansey. “It is totally a classy operation. The gallery is gorgeous.” http://www.scotttanseyphoto.com/ 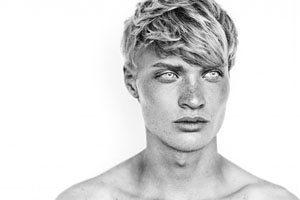 German photographer Manuel Pandalis will be featuring his portraitures in a solo show titled “Pure” which will also be opening on Saturday. Pandalis takes a unique approach to portraitures. Unlike the “typical” headshot he chooses to extract the essence of his subjects without utilizing photoshop or makeup. http://manuelpandalis.com/

The opening reception for both exhibitions will be held from 6-8pm at Leica Gallery Los Angeles (8783 Beverly Blvd. West Hollywood, CA 9004), The exhibit will remain on view through August 31st. 424.777.0341;  http://www.leicagalleryla.com/