Lowell Ryan Projects is pleased to present “Shangri-La,” a solo exhibition of new paintings by Southern California-based artist Michael Harnish. On October 15, 2022, an artist reception was held. Not to worry, you have until November 12, 2022 to view the exhibition. 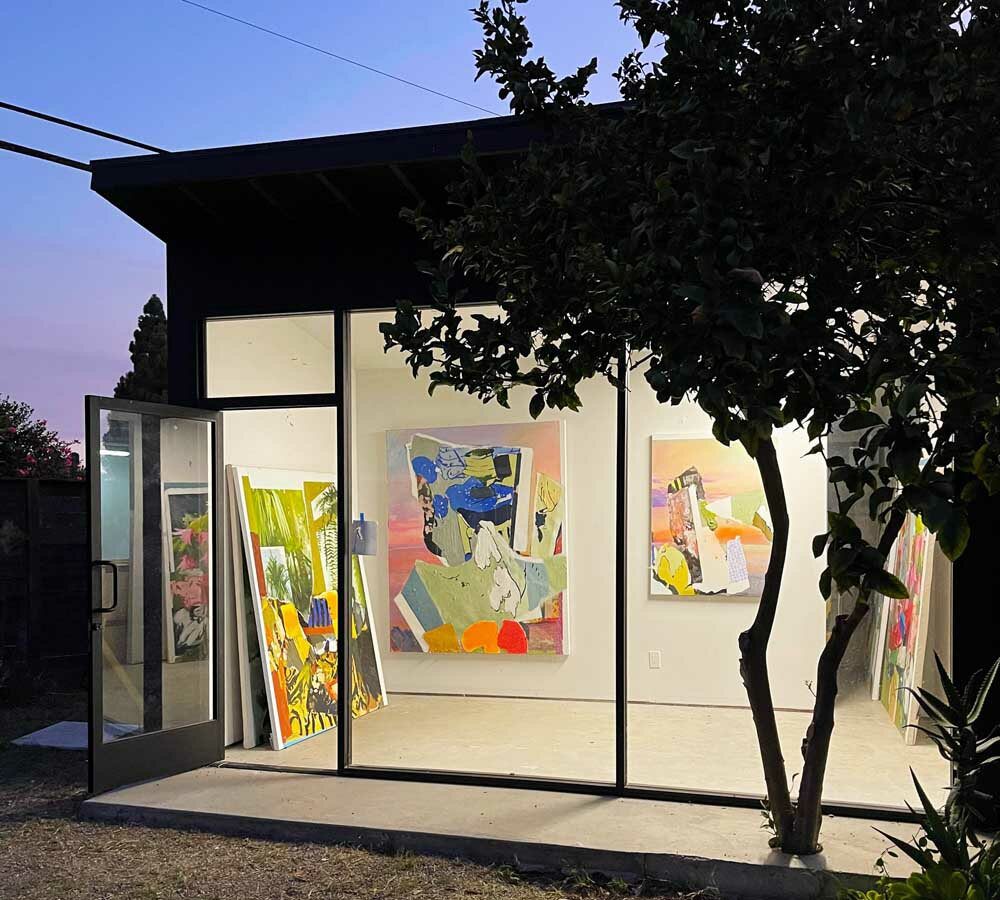 Utilizing a vibrant palette and varied forms of mark-making, these acrylic and oil-based works incorporate juxtapositions that allude to native flora, pattern, Japanese woodblock prints, horizon lines, house plants, and ceramics. Taking its title from the mythical local in James Hilton’s novel Lost Horizon, Harnish brings a dose of Southern California insouciance to the subject matter—infusing an east-meets-west visual dialog indicative of his home surroundings with a spray of neon paint under the shadow of a palm tree.

In Shangri-La, the works are installed as a montage, reading off each other as color, form, and imagery echo throughout the exhibition. Harnish who frequently begins his process by creating collages—tearing pages from books and magazines, and combining images and color intuitively—reflects that action in these paintings. A cartoonish depiction of a Japanese woodblock print is juxtaposed against a pink sky over the ocean at sunset, rich gold and black brocade set off a brushy rendering of a hanging fern, while painterly applications of bold swaths of color intersperse the picture planes throughout the works. The paintings in Shangri-La reflect glimpses of place, memory, and illusion that tell a story unique to the artist’s whims.

As a native Californian, the concept of ’Shangri-La’ itself plays out in Harnish’s surrealist works. The experience of growing up and living in such a diverse culture is envisioned in Harnish’s choice of subject matter. As told in the book Lost Horizon, a meeting of cultures plays out in a fictional utopian lamasery where time stands still. Los Angeles with its mild climate, sense of possibility, and imported palm trees is a beacon for people from all over the world. While Hollywood has long explored a fabled concept of Los Angeles, living in a place that lacks distinct seasons has the ability to distort one’s perception of time. As we find in the novel, a distortion of reality does not always work out to one’s advantage, however maintaining a feeling of wonder and youth can operate as a tonic to the soul.

Michael Harnish (b. 1982, Dana Point, CA) lives and works in Fullerton, CA. Utilizing imagery pulled from various sources including botanical books, fashion magazines, and commercial signage in his native Southern California, Harnish begins his painting process by first making paper collages. These collages then become the inspiration for his paintings—sometimes accurate depictions of the original collage, other times improvisation takes the lead once the brush hits the canvas. Having received his MFA from the Laguna College of Art and Design in 2010, Harnish has exhibited at various galleries in Southern California including a recent exhibition with the Newsstand Project, Los Angeles.