Dave Lefner, best known for his detailed linocuts of iconic Los Angeles neon and facades, takes his carving tools on the road to capture the American “motor inn” culture of the West. Depicting classic motel images from sunny California, Nevada, Utah and beyond, Lefner ultimately brings it home again…as all roads lead back to LA. For the first time in a gallery, he will be unveiling his on-going “LA Alphabet” series, a sort of scavenger hunt, featuring individual letters from iconic to obscure neon signs all over this City of Angels.

Here is some more info about the artist direct from the gallery’s website:
The year was 1992, and Dave Lefner was into his second year of college at Cal State Northridge. He had just discovered printmaking, an artistic soul mate that would stand the test of time, but for now it was the red hot “I have to have you now” kind of thing and the presses at school were all busy. So Dave improvised. He had his linoleum canvas carved into his vision – an abstracted street scene featuring a traffic light and liquor store sign. Now he needed pressure. He thought, “What is the heaviest thing I own that rolls?” That would be the “Green Bomb,” a classic 1972 Oldsmobile. Dave positioned his carved linoleum behind the back wheel, carefully placed a piece of Masonite over it and hopped into the driver’s seat. Slowly he backed up, and then rolled forward. It was a crude way of doing it, but Lefner had just made his first linocut print. It was the beginning of a long love affair.

Lefner always knew he was going to be an artist. He has a drawing tacked up on his refrigerator that he did when he was in first grade. It shows an artist at an easel, even sporting a French beret, with a caption reading “Someday I will be an artist. I will paint a lot of pictures. It was my first self-portrait,” Lefner laughs. He may have known what he wanted to be when he grew up, but he still had a lot of growing up to do. 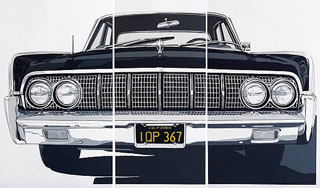 Born and raised in Los Angeles, in the San Fernando Valley, Lefner had a traditional suburban childhood. He went to Crespi, a Catholic all-boys prep school, where the focus was on academics and football. Lefner was a wide receiver on the 1986 Divison 1 championship team, which in a state as large as California, is no small accomplishment. Lefner admits most of his high school life was centered on football, and that high testosterone culture wasn’t exactly a Petri dish of support for a budding art career. “No, it wasn’t cultivated in high school,” Lefner remembers. “But I always had the ability to draw. I would do caricatures of the coaches and things like that.”