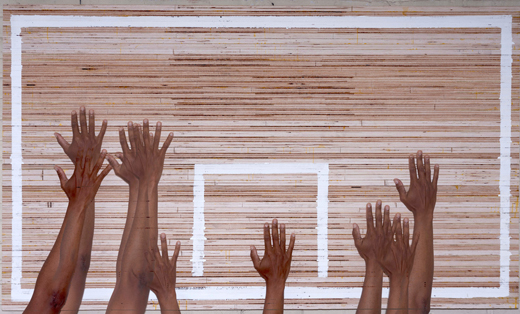 David Alekhuogie, The Value of G. No. 3., 40 x 60 inches, Backlight photograph, courtesy of the artist

“Gravity” includes a series of backboard paintings, produced by the artist’s repeated attempts to jump and hit the canvas with his hand. The strenuous mark-making of this gesture undercuts the precision of minimalist painting while physical striving and falling become a metaphor for the precariousness of freedom in America. Gravity also includes photographs of models wearing low-slung pants, a trope of urban hip hop culture that has been widely criminalized. Captured in diffuse light and printed on satin, these normally contentious garments become abstracted, painterly images that blur flat photograph and sculptural object while examining the visual poetics underlying the way intersecting cultures assign value to race, and gender in America. Trained primarily as a photographer, Alekhuogie takes a multidisciplinary research approach that spans textiles, collage, video, photography, and sculpture.

Surveying Mariah Garnett’s work to date, “Trouble” includes a selection of her films and installations from 2010 to the present day, alongside related prints. At the heart of Mariah Garnett’s exhibition will be an installation of her new film Trouble, a feature-length experimental documentary about the artist’s burgeoning relationship with her father, whom she only met in adulthood. 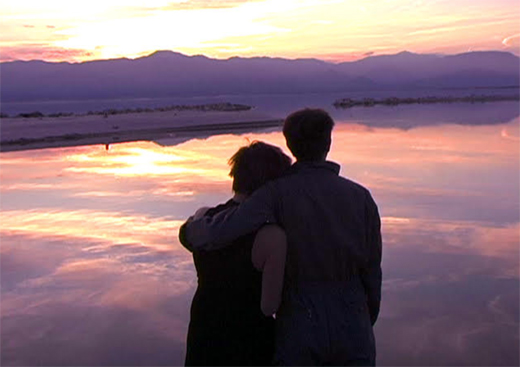 The film travels to his native Belfast where Garnett immerses herself in past and present political struggles. Trouble has been in the making for over four years and represents the culmination of all of the works in the exhibition. Garnett’s earlier work – from war veterans turned Hollywood stuntmen in Full Burn (2014) to a friendship with a gender ambivalent ten-year old in Picaresques – will also feature and what unites the films is a dismantling of the power structures surrounding representation in mainstream cinema. By including her own image, Garnett positions queerness in relationship to subject matter that on the surface may seem disconnected from LGBT identity.

There will be vibrant programming throughout the run of both of the exhibitions. Be sure to check the website for more details.