The California Heritage Museum is pleased to present two exhibitions by Santa Monica artist Lou D’Elia. Both exhibitions are currently open and will continue through July 28, 2019. The Museum is open Wednesday through Sunday, and its hours are 11:00 a.m. until 4:00 p.m. The Opening Reception is scheduled for Saturday evening, April 27, from 6:00 until 9:00 p.m. The is the museum’s first Santa Monica City funded LGBTQ Outreach Program.

“Some Assemblage Required” will feature D’Elia’s assemblage artworks. D’Elia frequently incorporates vernacular photography, artificial light and visual puns into his artwork, and they are often commentaries on politics, sexuality, role-identity expectations, and the acknowledgement that life passes by all too quickly.

D’Elia was born and grew up in the seaside Ocean Park neighborhood of Santa Monica where he appreciated the amazing light and sharp shadows that bathe Ocean Park, the same light qualities that had attracted so many artists to live and work there. While attending college D’Elia worked for a time in the late 1970s and early 1980s as a free-lance photographer, photographing artists and celebrities including Andy Warhol, Alfred Hitchcock and others. His work was published in several film/entertainment magazines. D’Elia’s life-long appreciation of art and fellow artists resulted in his being one of the organizing and founding members of what became the Photography Council at the Los Angeles County Museum of Art. He has curated numerous photography exhibitions at museums throughout California. D’Elia continues to reside in the Ocean Park neighborhood of Santa Monica where his studio is also located. 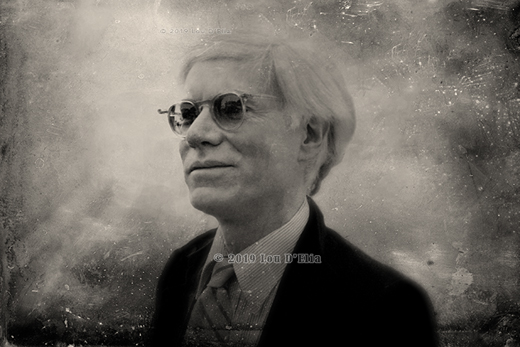 In 1979, D’Elia had the opportunity to photograph the legendary Andy Warhol when he was in Los Angeles to help Wally Amos (a close friend), celebrate the four-year anniversary of the opening of his first retail ‘Famous Amos’ cookie store at 7181 Sunset Blvd in Hollywood, California. D’Elia was allowed close access to Warhol, and using his Nikon F2AS 35mm camera with a 50mm portrait lens, he took twenty photographs of Warhol, but never printed them because a technical issue had caused the camera negatives to shift red. The images were thought lost/useless for over three decades, however, in early 2017, with the technical assistance of Noureddine El Warari, well-known master printer of photography, the camera negatives were returned to their vintage original life. Printed and on exhibition for the first time are D’Elia’s photographs, and a series of photo/paint collaborative artworks with fine art painters Gus Harper and Gino Perez.

Visit the FB Event Page; Find out more about Lou D’Elia on his FB Page – https://www.facebook.com/3rddimensionart/