The Skirball Cultural Center presents “Paul Simon: Words & Music,” a traveling exhibition curated by the Rock and Roll Hall of Fame and Museum and making its only West Coast stop at the Skirball. This is a fantastic exhibition – read my Huffington Post review for additional info.

Additional info provided by Skirball: Developed based on exclusive interviews with the artist, the show will walk visitors through Simon’s life and music and illuminate his creative process. On view will be instruments, records, sheet music, handwritten lyrics, photography, costumes, and stage maquettes, as well as listening stations and performance footage spanning Simon’s six-decade career. Exclusively for the Los Angeles presentation, “Paul Simon: Words & Music” will include additional artifacts from Simon’s private archive and a newly created music lab developed by the Skirball in cooperation with Roland Corporation. 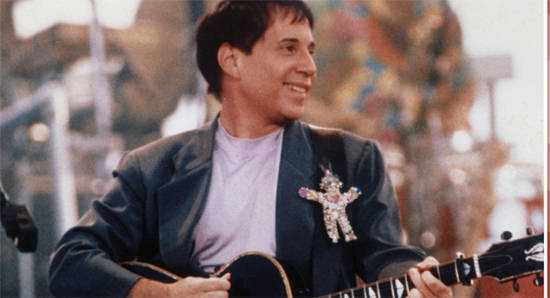 Paul Simon (b. 1941) has spent his life making music. From his first compositions as a teen and his celebrated work in Simon & Garfunkel to his transformative collaborations with world musicians up to and including his current work, Simon’s evolution has been grounded in a lifelong quest to find the words, music, and rhythms that connect most deeply with listeners. Through his songs, he has captured the story of generations and the mood of the nation, from disillusionment and fear to hope and compassion. As the exhibition reveals, he stands as a sterling example of the power of music to reflect social and cultural ideals and to communicate them to the rest of the world.In choosing Simon among its “Greatest Songwriters of All Time,” Rolling Stone hailed, “If Paul Simon’s career had ended with the breakup of Simon & Garfunkel in 1970, he would still have produced some of the most beloved songs ever…. But Simon was just getting started. The quintessential New York singer-songwriter, he switches between styles effortlessly with as much attention to rhythm as melody, a rare quality among artists who came of age in the folk era. Over the decades, his music has incorporated Tin Pan Alley tunecraft, global textures, gentle acoustic reveries, gospel, R&B and electronic music, all without diluting his core appeal as an easeful chronicler of everyday alienation.”“Paul Simon: Words & Music” will be organized chronologically, with specially themed sections that cover Simon’s early years and Simon & Garfunkel period, his acclaimed solo work since 1971, and his songwriting process. In the newly developed music lab, visitors will experience Simon’s recordings firsthand, inviting music fans to experiment with them by playing acoustic guitar, manipulating rhythms on a mixing console, and harmonizing with Simon on one of his most popular tunes.The exhibition opens on April 27, 2017. Museum hours: Tuesday-Friday 12:00-5:00 p.m.; Saturday-Sunday 10:00 a.m.-5:00 p.m.; closed Mondays and holidays. Admission to exhibitions: $12 General; $9 Seniors, Full-Time Students, and Children over 12; $7 Children 2-12. Exhibitions are always free to Skirball Members and Children under 2. Exhibitions are free to all visitors on Thursdays.

Save the date….May 12, enjoy a rare opportunity to see the exhibition “Paul Simon: Words & Music” at night for FREE! Stop by anytime between 6:00 and 10:00 p.m. to celebrate the artist’s enduring legacy. At 7:00 p.m., take a tour of the exhibition led by Museum Director Robert Kirschner. Stick around to enjoy a full cash bar and local food trucks The Deli Doctor and Mandoline Grill. Then pick up exhibition-related gifts and memorabilia at Audrey’s Museum Store, open throughout the night.For general information, the public may call (310) 440-4500 or visit skirball.org. On view: April 27 – September 3, 2017