Skip to content
On View thru May 21, 2022: Band of Vices, Two Galleries, Two Openings

Band of Vices presents new exhibitions at two of its galleries. Both art shows opened on April 23, 2022, and will run through May 21, 2022. Two concurrent solo exhibitions by Dallas-based artist Abi Salami and the Baltimore-based artist Andrew Gray debuted at its main gallery (5351 West Adams Blvd., LA 90016). At its coLAB space (5376 W. Adams Blvd., LA, 90016), “Nothing to see Here” by Hubert Neal also opened. Remember to confirm with gallery for up-to-date covid protocols and guidelines – (proof of vaccination and masks MAY be required). 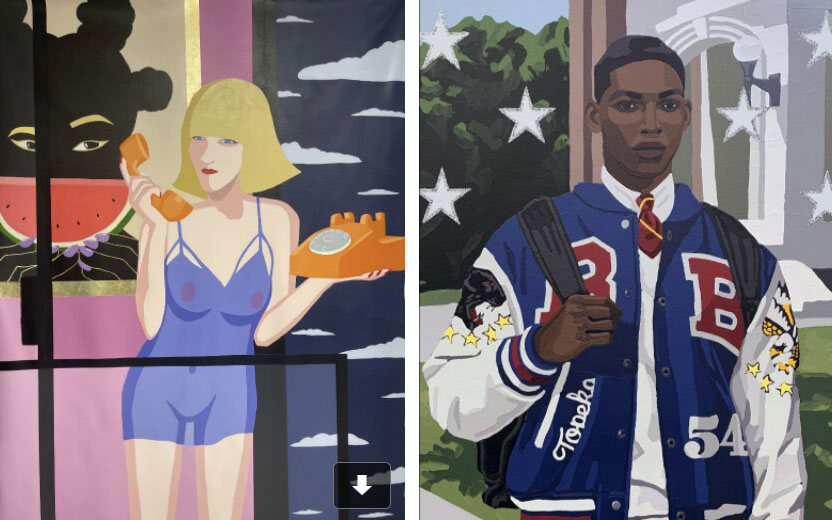 Band of Vices’ Sacred House (the main gallery) features two emerging artists, who challenge our notions of the Black experience, from both mythical and expressionistic viewpoints.

While building upon her autobiographical stories, Abi Salami provides two different series, “the Disconnected,” a searing commentary on the contemporary art world and her “Dance with the devil/blood in the water,” an in-depth examination of the exploitation and toxicity of capitalism. Notes the artist: “I take an introspective look and admit that since I don’t possess the power to change the system then all I can do is play along and wait until my moment comes.”

In “Indeterminate Space of the Imaginary” Andrew Gray’s approach is re-appropriating the mundane and everyday to include representations of working class Black people who also, as Americans living their rightful dreams, are compelled to enjoy the simple, yet leisurely aspects of life. The artist writes “My charge, as I see it, is to highlight a range of diverse black characters to exemplify my ethnicity not as a monolith but instead a community of complex human beings. I display figures who are frequently left on the margins of society and place their stories at the center of the canvas, this elevation suggests that they are not the exception to modernity but its exemplification.”

Here is a bit of info about “Nothing to See Here” by Hubert Neal, Jr., who is exhibiting work at the Colab gallery (5376 W. Adams Blvd., LA, 90016): Originally from Chicago, the Los Angeles-based artist, Hubert Neal, Jr uses playful imagery to pull the viewer in and strikes them with the continuous reminder of police assaults on Black and Brown communities. As childhood trauma holds a constant metaphor of the plague of war that our “boys in blue” have instituted on under-represented people, the artist “uses a combination of playful, striking, and haunting imagery to portray victims of police violence in order to evoke an emotional response, an alternative call to action through art, rather than waiting for the next video of murder to do it, and a way to keep the memories of the victims alive. The issues with acceptable uses of force, systemic racism, and corruption in the nation’s police departments are an ongoing epidemic seeded deeply in a historical culture of oppression.”