In these solo shows the artists showcase their vision of the unique light and noir beauty that is Los Angeles and Southern California in a series of oil paintings.

Eric Nash paints iconic moments of the LA experience. Mysterious and graphic, his oil paintings are often in large format. He has been featured in many solo shows and noted publications. He counts numerous prominent LA citizens and celebrities as collector in addition to those around the globe. He is an art graduate of the University of Illinois and he has lived in Los Angeles since 2000. www.ericnashart.com 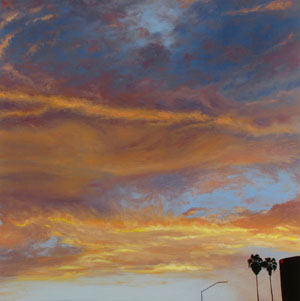 Bradley Hankey uses his iPhone photos as inspiration for his iconic, saturated and moody Southern California square-format oil paintings. He has been featured worldwide on numerous art and lifestyle blogs showcasing his unique visions of Southern California. He is a graduate of Massachusetts College of Art and Design in Boston and he has lived in Los Angeles since 2009. www.bradleyhankey.com