Rockwell: Table & Stage has been a staple of Los Feliz since 1944 when it was originally

opened as Sarno’s Bakery. Sold to new owners in 2000 and named Vermont Restaurant, this restaurant underwent another transformation when a theatre group came into the picture and began performing a series called “For the Record,” a revue-style show that pays tribute to the soundtracks and scenes of famous film directors. The Vermont soon expanded, due to ticket demands, transforming into the current Rockwell: Table & Stage.

The theatre group remained, now packing the 180 seater bar and restaurant every weekend. The food (and drink) is really good and very original. It’s like a Broadway show in the middle of Los Feliz! Incredibly talented singer/dancer/actors…actually most of them were originally in NY on Broadway but moved here for the allure of TV and film careers. The “For the Record” show I saw was of Gary and Penny Marshall, featuring music from such films as “Beaches”, “Big”, “A League of Their Own” and “Pretty Woman.” It’s the closing night of this 7th in the series, with the next one, started April 18th, an homage to the Cohen Brothers, which should last a month. There’s an air of excitement in the room! 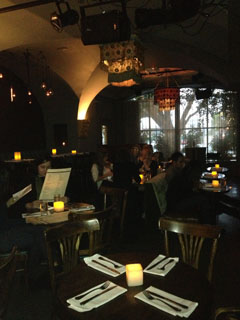 We got seated at 7:00 pm, looking around the room. This is quite the funky retro space, with a stage that has a walkway, with a big keyboard painted on it. There is a bar and restaurant in the back, and this showroom in the front is spacious. Big stage, professional lighting and sound, a grand piano, bass and drums set up. There’s a nice size bar, 4 -tops near the stage, premier “booths” against the wall. There’s even a couch in the middle of one side of the room.

You can’t help feeling like the hip crowd is going to show up, any minute now! Menu items sound really unique; drinks like: “Jim Got Down On His Knees.” I’ve ordered spicy tuna tacos (which I’ve had before here, and made my mouth water coming over!) and my husband ordered Pan fried Mac and Cheese with broccolini. (It came, I tasted…yum!)

It’s 7:18 and the crowd is coming in. The Rolling Stones “She’s a Rainbow” is playing in the background at an enjoyable volume. They sat two friendly people at our table. An Aussie actor, and his manager…we got into a fun conversation…mostly about treasure hunting, interspersed with entertainment industry conversation. It turned out that the manager also manages one of the performers in the show, who is also the choreographer.

It’s 8:15, and the place has really filled up.. The house lights are down, people are eating and drinking, and there’s definitely a buzz in the room! The MC comes out, very charming and fun, getting a great response from the audience! And then it starts!

High intensity, fun right from the first moment! A wonderful and high energy band backs up 7 totally incredible singers/dancers/actors! Vignettes; fast moving , into a rockin version of “Pretty Woman,” the actors walking and dancing up and down the extendedstage and throughout the audience. 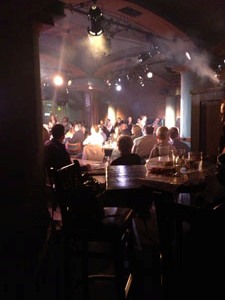 e first half of the show, focusing mainly on “Pretty Woman,” moved through different movies, like Tom Hanks’ “Big.” Therefore the keyboarded stage (a memorable part of the movie)…a fun experience, watching these guys clown around, accompanied by the fabulous band.

These performers are, each one, so talented, it’s really like seeing a Broadway musical, up close and personal. Sometimes solo singing, sometimes duo, many times the lead singer is flanked (albeit all over the room) by background singers. I think anyone in the room is drawn in by the well produced, exciting musical theatre. The evening is filled with recognizable songs, arranged by the pianist……and played incredibly well by the band, made up of piano, bass, guitar, and drums.

Right before the intermission they bring a ringer up who starts off singing subtly and quickly becomes a contender for “The Voice”! His singing is the kind that will rip your heart out…The talent of these people is really over the top!

I’m certainly struck by what a great experience it must be to be a member of this troupe! A total workout; singing, dancing, acting..everyone working together, joy for the performing. It’s a total experience, in which the audience can experience all the emotions of the performers.

After an intermission they moved into “A League of Their Own”, about a girl baseball team, very funny. And then “Beaches” was the feature of the 2nd half of the show,well written to include the time line of the whole movie. As in the first half, the troupe worked their hearts out and delivered a spectacular show! The ringer lead the finale of the show in a spectacular version of “Joy To The World”, surrounded by all the singers and the band funking out! 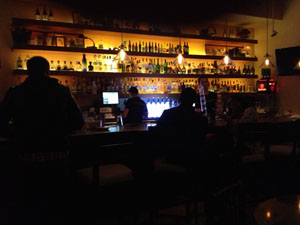 ere are other nights of entertainment as well, at The Rockwell. At this point, after the show, a late night, 11 to 2 am, Friday hang with high energy rock/jazz band lead by Israeli transplant, pianist David Nathan. On = Wednesdays right now they’re hosting actor/musician Jeff Goldblum’s group, who has played around town in various hip clubs for many years.

This area of Los Feliz has developed into a hip hangout area for foodies, bookstores, movie houses, and artsy stuff. And for a very reasonable price, you can enjoy a terrific Broadway-like show, up close, in a hip environment, with good food and drink. Call the club for more information.