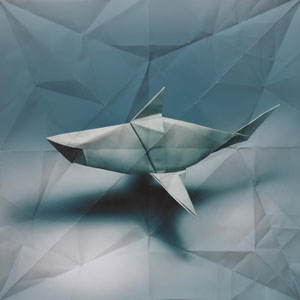 Marc Fichou offers a cross-medium exploration of a loop connecting two versions of the same object in space and time, one containing the other. In “8×8″, a sheet of wood has been divided into pieces to form a temporary three dimensional arrangement, which after being photographed in the gallery is put back into its original 2D shape to become the support of its own image. The exhibition space is now perceived as both containing the piece and contained by it.

In the series entitled “Paper on paper,“ the image of an animal made of folded paper is superimposed on the folds that led to its creation. Origami and paper are one and the same thing at two different times, in two different spaces and in two different shapes. The final piece is an unfolded print where folds in the picture blend with the actual folds, thus establishing a continuity between image and matter.

In the last room, the artist cuts out from the very walls of the gallery to create an assemblage, which then sits inside it. This, by turning part of the spacial enclosure into what is displayed, the containing once again becomes the contained. 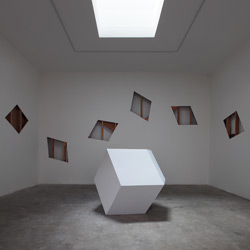