Anand Varma engaged us on a fascinating journey that wove together his personal reflections on how he developed his skills and innovative professional practices as a photographer with the captivating stories he created for National Geographic that explore the unseen, to the naked human eye, behaviors of some of the smallest creatures on Earth. 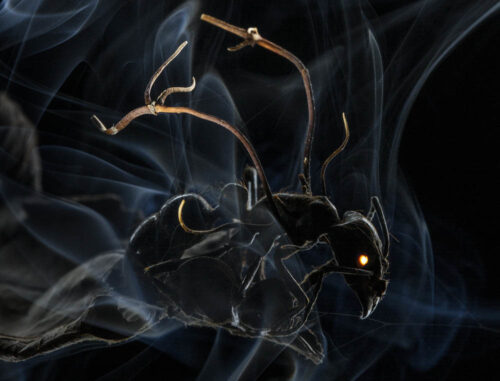 Varma’s interest in photography began when he was a teenager curious about nature. He then had a goal to become a marine biologist during his academic studies at UC Berkeley.  His path shifted with the opportunity to travel the world for several years working as a photographic assistant. He was awarded a National Geographic Young Explorer grant to document the wetlands of Patagonia has become a regular contributor to National Geographic. His first feature story, called “Mindsuckers,” was published on the November 2014 cover of the magazine that won him the World Press Photo’s first prize in the nature category.

Varma alluded to how his techniques of macro-photography were influenced by the lighting and composition styles used in film-noir, comic books, and Japanese anime. He showed how his work is done in controlled- settings, both scientific laboratories as well as his hotel room when traveling, a very creative combination of rigorous scientific protocol, innovation and improvisation. He says, “I take a shot, I look at the results, analyze them, and then design a new iteration of that experiment.”

His presentation began with an incredible look at the parasites that attach themselves to crickets that initiates the process of a worm developing and evidentially emerging from the cricket’s body, reminiscent, on a very small scale, from the storyline of the science-fiction film “Alien.” He similarly captured this food chain parasite-host relationship between a wasp and a caterpillar and a fungus spore and an Amazonian ant. Varma acknowledged the visually gross aspects of the images while also speaking to how these parasites, which make up 30-50% of all biodiversity, contribute to the health of ecosystems. Most fascinating is that medical science is now investigating how the mind-controlling chemical interactions from the parasite that inhibit or paralyze the hosts may be like how Parkinson’s disease affects human beings, and as such provide an insight to treatment. 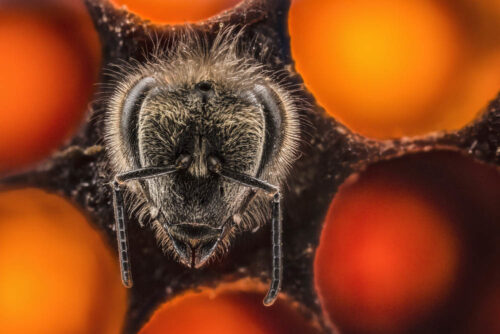 He also shared his work capturing the first 21 days of the life of a honeybee and the hauntingly predatory behavior of bats that live in ancient Mayan temples. Balancing out the science-oriented presentations was viewing a more artistic video of images set to music from Rob Moose and the Magik*Magik Orchestra.

The formal presentation concluded with the beautifully captured time-lapsed video that revealed the intricate biomechanics of a hummingbird in motion. Adding to the educational value and enjoyment of the evening, Varna then fielded questions from the audience, many of which were from young people.

All-in-all, the presentation gave me pause to appreciate the great value that art and science provides us to, at least momentarily, direct our perception and experience of the world beyond the mundane.

National Geographic Live is an ongoing series of programs that brings photographers, scientists, authors, filmmaker, and explorers to public audiences around the world. For more information, go to natgeolive.com

For more information about upcoming performances including National Geographic Live presentations at The Broad Stage – go to thebroadstage.org