Skip to content
Review: Jennifer Holliday at the Wallis!

Before there was Jennifer Hudson, there was Jennifer Holliday! No disrespect to Ms Hudson, she’s got all of our R-E-S-P-E-C-T, but Jennifer Holliday’s original portrayal of Effie in “Dreamgirls” back in 1981, was monumental. As someone who grew up in NYC and frequented Broadway shows, this Tony Award Winning performer left an indelible mark on me. So naturally I wanted to attend the one night show at the Wallis to see this legend. 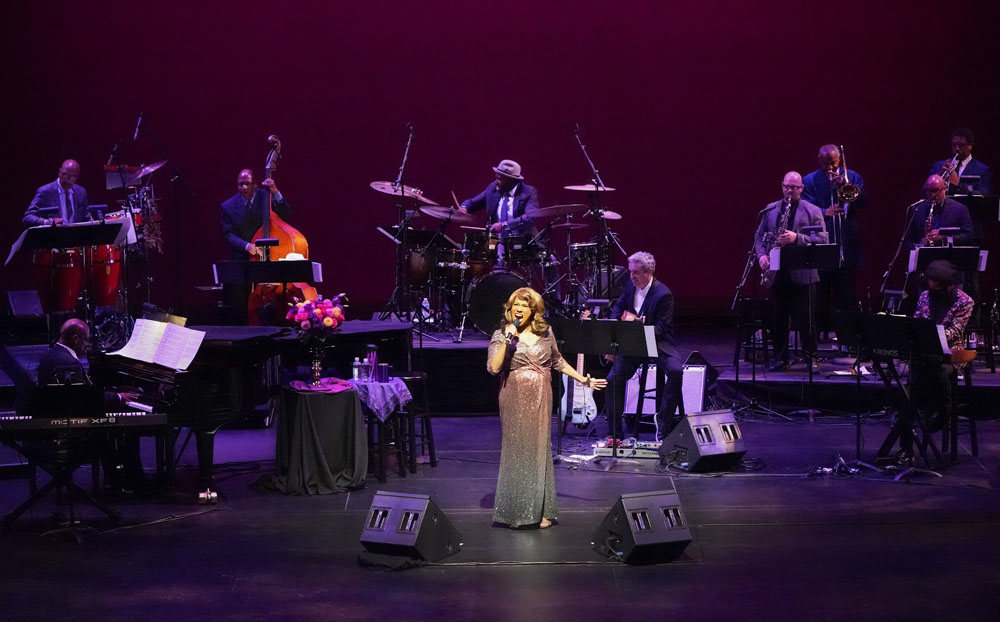 All images by Lawrence Ho; courtesy of the Wallis

At close to 61, the singer still has it. Her voice is perfection. She stayed true to her signature phrasing with bluesy growls and grunts, wailing impeccably through high notes while bringing us all back to a happier Covid-fee time. The audience jumped to its feet not once, but 4-5 times during the evening.

Holliday performed a mix of Broadway and jazz songs. The show started out strong with a medley of “I’m gonna Live till I Die,” and “The greatest Star, but no-one knows it.” She described what it was like to come straight from singing at the Pleasant Grove Baptist Church in Houston, Texas, to performing on Broadway at such a young age. She was just 18 when she was cast in “Your Arms too Short to Box with God,” then she starred in “Dreamgirls” when she was 20. I had no idea she was so young when she commanded that stage. She was a fierce force to be reckoned with…well beyond her years. In December 2021, “Dreamgirls” celebrates its 40th anniversary.

Holliday joked that she only had one hit song. While most of us in the audience were waiting with bated breath in anticipation of her singing just one of the songs from “Dreamgirls,” she sang three – “One Night Only,” “I am Changing,” and the song that would would win her a Grammy – “And I Am Telling You, I’m Not Going.”

Her patter in between songs was incredibly vulnerable. She talked about the darker side of show biz…”it’s not all glitz and glamor” – revealing that she went through years of depression. She also paid tribute to the people who helped her – Michael Bennett, Barbara Streisand and Marvin Hamlisch. 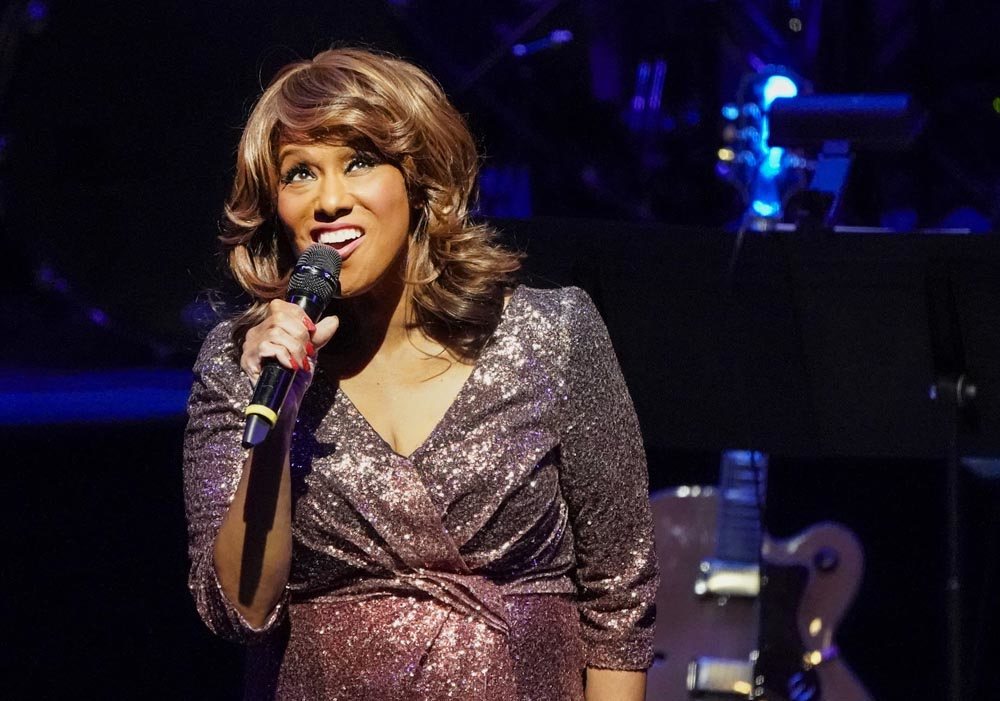 Like many well-known performers, Holliday admitted that she was experiencing more nerves than usual due to the long hiatus that covid created. Also adding she was working with this band for the first time, which made us all a bit more nervous each time she pointed it out.

She forgot lyrics, but remained calm and came out triumphant. Each time she referenced making a mistake, the audience applauded. We didn’t care. Mask muffled cheers came back to her…”we love you,” “you are great.”

The band, hired for the night was steady, professional, and talented. But it was obvious it was not Holiday’s band. It felt like the musical director Herman Jackson was a bit timid as a band leader, but his arrangements, and skills as a pianist were spot on.

As is always the case, it usually takes a few songs for a band to truly find its groove. Holliday reigned them in during “God bless the Child.” At one point she exclaimed “Let’s break it down.” This is when she took ownership of the band. She initiated a call and response with the guitar player – trading playful vocal runs for his deft guitar riffs. It was a highlight for me. 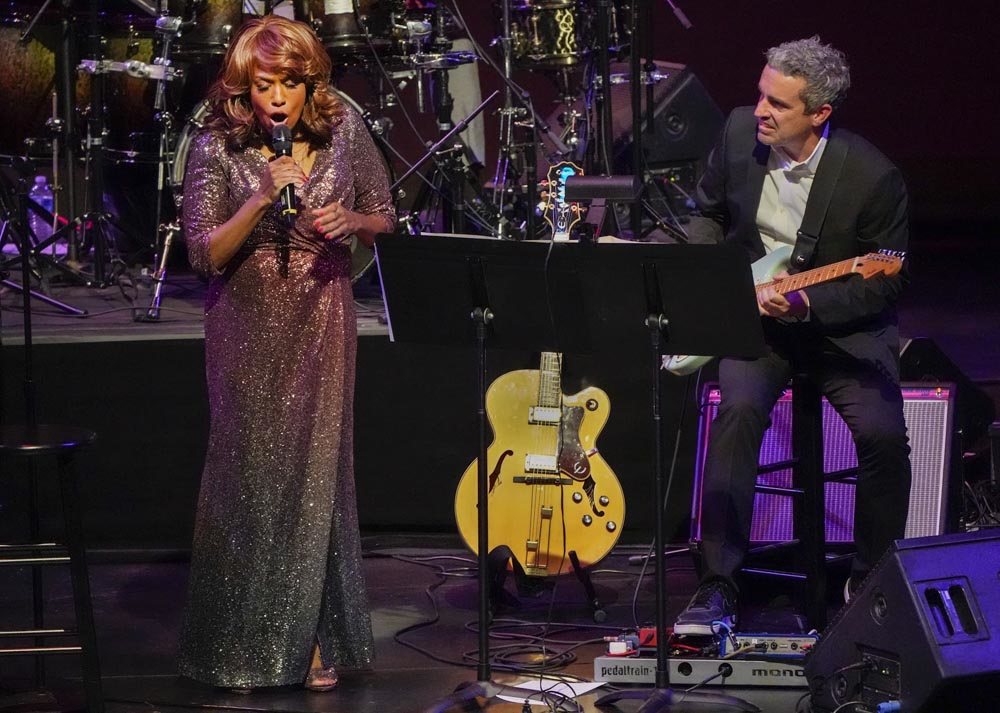 Her rendition of “Memories” was stirring, along with her encore performance of “At Last.” The finale, “And I am Telling You” was simply breathtaking, bringing everyone to their feet once again.

When Holiday apologized again at the end of the night for not putting on a performance that met her standards, you could almost hear the audiences’ hearts breaking. If only she had kept some of her personal disappointment to herself, much of the audience would never have noticed the short-comings. Those who may have noticed clearly understood, did not care and were simply grateful for the opportunity to see her on stage. Greatness is achieved with high standards, but Holiday was too hard on herself under the current challenging circumstances, with everyone involved just getting back to work.

All in all it was a fantastic show, whether Jennifer Holliday thought so or not. If I could tell her anything, I would say “The audience does not expect perfection. They faced covid restrictions to see you. They love you….Take it in. Jennifer Holliday is magnificent, she just needs to get out of her own way!