The opening of Jeffrey Deitch’s Los Angeles Gallery of the artist Ai Weiwei does well to showcase the expansiveness of the space. The 15,000 square feet gallery is phenomenally curated, most notably with the center-piece Stools acting as not only the anchor-point and talking piece but as a center stage for which the entire exhibition centripetally motions around. 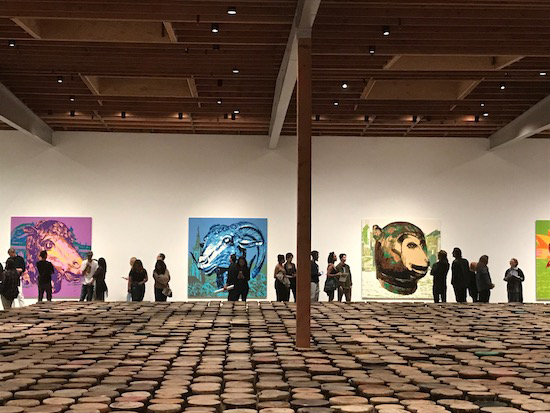 The work is suitable with the general theme of Weiwei’s playfulness of space. Abstract quantities do not impress weight upon the mind like a visual bludgeon of almost 6,000 stools. The 2013 work is consistent with many contemporary artists’ command of the physical, organic world over the digital, synthetic one which has inundated humanity over the last decade with smart phone technology. Photography does not do the work justice in its gravitational impression, which helps us remain planted in a higher world of nativity. Digital bits, in other words, cannot elicit the same verve as the physical presence.

Speaking of this impression, the Zodiac collection offers a similar astonishment which is only made fruitful with such a large exhibition floor. Upon close inspection of the LEGO block medium, we are consumed by the animal heads which tower over us. And we cannot ignore the LEGO block textures and their sharp masterful gradients of color. This captivation of texture and color occludes us, however, from the larger composition. It is only when we see the works from a distance, across the bow of Stools, does the picture become clearer: there is a human element. 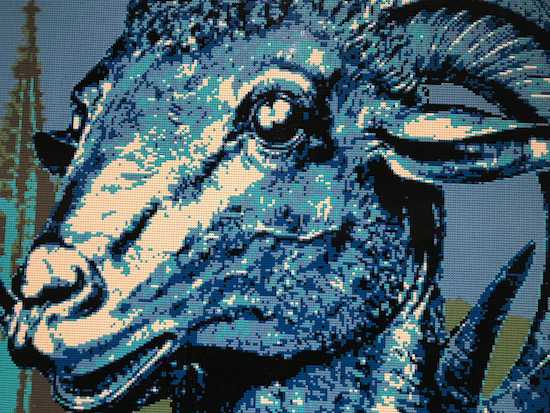 Of course, the Zodiac metaphorically maps to human personalities, but Weiwei could have been fulfilled in just this LEGO artistic expression. Instead, there is the backdrop of industrial metropolises – generally Western – and the anthropomorphic elements to the animals being dressed in human garb. It is almost an homage to Western Renaissance portraitures, and an interesting hybrid of East meets West. This hybridization is further amplified when considering the Danish origination of LEGOs. Is this merely experimentation of medium and cultural matrimony? Either way, it is a further playful yet clever use of quotidian objects to gratify human craftsmanship. The exhibition remains on view through Jan. 5, 2019; Jeffrey Deitch Gallery, 925 Orange Avenue. LA, 90038; http://www.deitch.com/