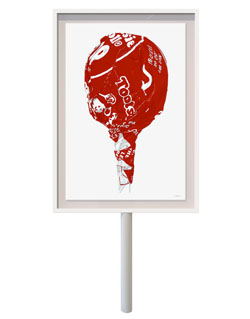 “New Works,” a solo exhibition which features the paintings of Dave Lefner.

What better way to get rid of that Valentine’s Day hangover than binging on more tasty, sugary treats?! “Sugar Rush,” New Works by Dave Lefner will tempt your artistic palette with his detailed, linocut depictions of vintage-themed candies.

There’s a-one, a-two, a-three… a-three new flavors of giant Tootsies Pops to choose from, complete with the stick! As well as many more to make any confectioner salivate. Lefner’s love of the vintage graphics shines through, and he revels in the irony that he chooses his labor-intensive, very artisan process of reduction linocut to recreate images of commercially printed wrappers run off in the millions. Come by and indulge your sweet tooth!

Lefner always knew he was going to be an artist. He has a drawing tacked up on his refrigerator that he did when he was in first grade. It shows an artist at an easel, even sporting a French beret, with a caption reading “Someday I will be an artist. I will paint a lot of pictures.”

“It was my first self-portrait,” Lefner laughs. He may have known what he wanted to be when he grew up, but he still had a lot of growing up to do. Born and raised in Los Angeles, in the San Fernando Valley, Lefner had a traditional suburban childhood. He went to Crespi, a Catholic all-boys prep school, where the focus was on academics and football. Lefner was a wide receiver on the 1986 Divison 1 championship team, which in a state as large as California, is no small accomplishment. 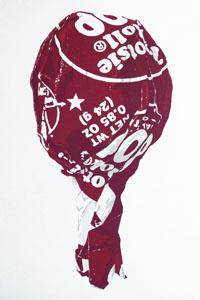 ner admits most of his high school life was centered on football, and that high testosterone culture wasn’t exactly a Petri dish of support for a budding art career. “No, it wasn’t cultivated in high school,” Lefner remembers. “But I always had the ability to draw. I would do caricatures of the coaches and things like that.”