Skip to content
On View Now: The Photography of Richard Bilow Featured at haleArts!

haleARTS is pleased to present the $100 Art Sale. The $100 Art Sale is a great opportunity for collectors to expand their collection with great deals on original art created by local artists.  An opening reception will be held Friday, August 19th from 5-8 PM.

The gallery will be hung with works of local artists including: G.P.Mauro, Lorién Eck, Deborah Reilly, Richard Bilow, Elizabeth Younger, Pauline Regev and Susan Price. All works will be available for $100 plus tax. The works will be on view and and for sale through August 31, 2016.

Photographer Richard Bilow’s work will be part of the exhibition. Well known for his aquatic art, he started shooting video and stills underwater for his aquatic installations in the early 90’s then shifted his focus to waves and wilderness in 2009. Bilow’s clients soon started following his photography career as well. He currently splits his time between both of his passions. You can view one of his recent aquatic art installations at Jaxon Home Showroom, located at 8884 Venice Blvd LA 90034, in Culver City. This partiular mixed media creation features his exclusive Bylosphere technology. By combining live fish with a 53 minute high definition movie production, Richard creates an amazing visual effect and captivates viewers with an entrancing depth and lighting illusion. Jaxon Home Showroom is located at 8884 Venice Blvd LA 90034. https://jaxonhome.com

“The best part of taking photographs in nature is that I find myself feeling extremely present, alive and at peace when I am in the process,” revealed the photographer. The below photo was taken in LA…during one of Bilow’s body surfing trips. “The shot was seemingly miraculous, because everything flowed so organically, said Bilow. “I saw the dolphin swimming under the waves, thought to myself ‘I hope it jumps,’ lifted the camera and the dolphin jumped right when I reached a height where I could just see the screen. I had to shoot with no time to compose. With a single frame I actually caught the perfect moment.”

His photography has been shown at Barnsdall Art Park and featured in local businesses as well as established hotel chains such as the Marriot Hotel. Bilow’s work was most recently showcased at the Venice Art Block and the Venice Art Walk.

Bilow’s work has been commissioned by notable personalities such as Barbara Lazaroff, Fran Drescher, Perry Ferrell, Tommy Lee, Heather Locklear, Courtney Cox, Charlie Sheen and Shaquille O’Neal, among others. His work has been featured in interior spaces, including the City of Beverly Hills City Hall Complex, San Diego Marriot Hotel, The Friars of Beverly Hills, and the famed Wolfgang Puck/Barbara Lazaroff restaurant, Granita, in Malibu California, and more. 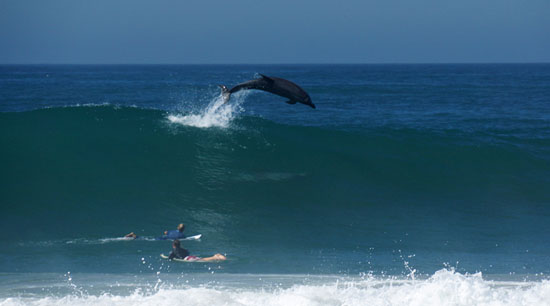 Bilow used a Sony to capture this photo. He added, “I have been a big fan of Sony cameras for years, because they have very fast and accurate focus and lenses with great stabilization. In this case, the technology really helped catch the moment.”

For more info about Richard Bilow, visit his website at http://aqua12.com/