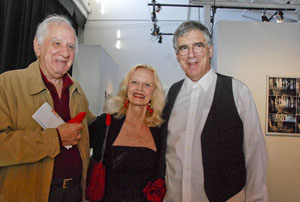 The HARC Foundation has two goals, “To help emerging creative artists and to use the creative arts as a therapeutic science in the rehabilitation of abused, neglected and traumatized children.” Their fundraiser was held in support of these efforts at the Gebert Gallery on Abbot Kinney Boulevard. The event was titled “Command Performance” and it featured presentations, both visual and performing arts.

The main floor of the spacious Gebert Gallery was filled with black chairs surrounding a seven foot Steinway & Sons Grand Piano provided by the Steinway Piano Gallery of West Hollywood. Wine and Italian antipasti (including tramezzini) were available while viewing the donated artworks in the silent auction. The auction featured pieces donated by ten local artists. Among the offerings were Digital Impressionism: “Pink Dalia,” 36″ x 24″ by Les Mayers, and Line Drawing: “100 Points on a Line,” 16″ x 20″ by A.M. Rousseau. 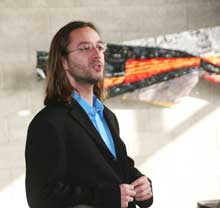 The musical presentation began with composer Patricio da Silva “filling in” on his own works for Yevgeniy Milyavskiy who was unable to perform due to illness. Patricio’s resume shows the many schools and fellowships it takes to compose (and perform) relevant modern works. His post-graduate studies included the local Cal Arts MFA program, a Phd from University of Cal through his post-doctorate work in “algorithmic composition” at IRCAM (Institut de Recherche et Coordination Acoustique/Musique) in Paris. Patricio performed several compositions including “Nocturne” from 2009 and portions of an unfinished work. The performance was concluded with Béla Bartók’s “Romanian Folk Dances.” He prefaced the works with the observation that “100 years ago pre-industrial revolution, it was the style to capture the idiomatic music of vanishing peoples and traditions and now in the internet age, there is a rush to scan and reformat everything for Youtube.” 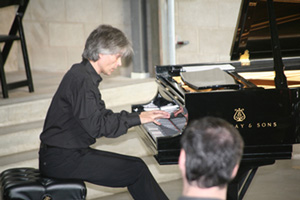 The renowned German pianist Markus Pawlik performed an extremely moving “Moonlight Sonata” by Beethoven and a 2003 composition by local composer, Peter Knell “4 Snapshots.” The fourth movement of this avant-garde piece featured a thunderous crescendo that required Pawlik to sound the piano with his forearm! A very pleased Knell was in attendance for the performance.

During the intermission, the audience was excused to view and make bids on the artwork, drink more wine and eat the antipasti. 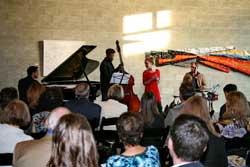