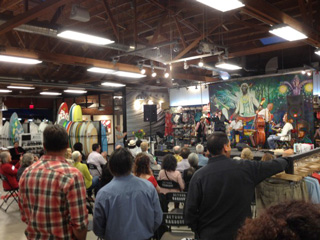 A number of poets gathered at 585 Boardriders off Abbot Kinney to celebrate and raise funds to help with the restoration of the Venice Beach Poet’s Monument. The monolith was created in 2000 by Beyond Baroque and the city of LA. The words of Jim Morrison (the Doors) Exene (X) and others were engraved in the concrete walls of the LAPD sub-station and three exterior shower walls.

The restoration will include re-etching some of the lettering and applying an anti-graphite protection and a continuing maintenance program. The party started with a special “Meet the Artist” reception at 6. By 7 pm the doors opened to a larger group of artists, poets and lovers of both. A silent auction had been set up with items from James Beach, Erwin Hotel, Altered Space Gallery and more.

The poets that came up on the stage, poured out original and heart felt works. They sang poems and spoke songs. We learned that Abbott Kinney may have dug the canals, but it was the beat poets of the 50’s like Alan Ginsburg and Jack Kerouac that dug the scene by the beach, exposing Venice as an artist’s hang. 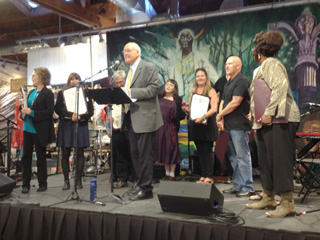 Xenne spoke of her pre “X” days as a poet living above a liquor store on Abbot Kinney. “Before I moved to Hollywood and did the star thing.” She missed her borrowed radio alarm clock and staying up late writing poetry.

LA City Councilman Bill Rosendahl addressed the group, speaking about the legacy of poetry in Venice. He gave each of the presenting poets a certificate from the City of Los Angeles.

Benefit for the restoration of the Venice Beach Poet’s Monument.
Thursday, May 31 585 Boardriders, Venice CA.
Presented by the Venice Arts Council;