Skip to content
Event Review: The Other Venice Film Festival 2014!

Along with scads of other Venetians, L.A. Art Party attended the big grand premiere opening night festivities of The Other Venice Film Festival on Friday, October 10th.

in Venice, with additional screenings at the Love Shack, the festival is now in its 11th year and is no longer viewed as simply an alternative to the Venice Film Festival in Italy, but as an important non-profit community event dedicated to screening films that embody the spirit, energy and diversity of Venice, California.

The festival’s 72 screenings spread over 3 days included feature length, short, and animated films, none of which had previously appeared on-line, according to festival organizer Reuben De La Casas. He was particularly excited this year to have for the first time a festival arts tent (in the spirit of Burning Man) set up outside Beyond Baroque. 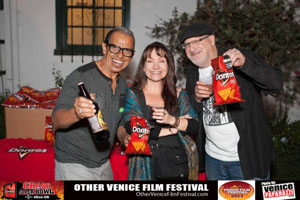 In addition to the screenings, The Other Venice Fest featured the presentation of its annual Abbott Awards given to outstanding people and projects in the Venice community and the film world. Past recipients include Werner Herzog, Roger Corman, Oliver Stone, Catherine Hardwicke, Stacey Peralta, Tony Alva, Orson Bean, Danny Trejo, Tony Bill, and Zak Penn. There was also live music by musicians Sans Frontieres, Natural Hi-Fi, and Ship of the Rising Sun.

The film we viewed was “Freedumb,” a 56-minute-long documentary that is a tribute to and cinematic portrait of six local Venice artists who came here from other places and now call Venice home. Filmmakers Laura Rudich and Sean VanLoozen screened their film for the first time, and it was very well-received. 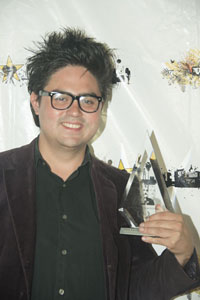 , the film is Rudich and VanLoozen’s attempt to figure out what attracts artists to Venice, and in doing so, answer the question of what attracts the filmmakers themselves to Venice (as well as the rest of us, of course).

Photo courtesy of The Other Venice Film Festival

We loved the film, and it reminded us why we love living in Venice, too. And, of course, it comes along at a very timely moment, when Venice is trying to decide if it wants to remain the counterculture carnival it’s been for the last 60 years, or if it wants to give itself over completely to the Googles of the world and fully morph into Silicon Beach. Wesley Flowers addresses this in the documentary, saying he is very optimistic that the spirit of Venice will always remain the same, no matter how much it changes on the surface. 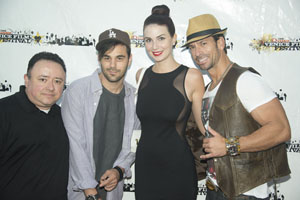 oto courtesy of The Other Venice Film Festival

Other films screened included indie flick “ERS,” “A Man Called God,” a doc about 1970’s cult leader Sai Baba, and “Prison Through Tomorrow’s Eyes,” a view of what’s wrong with our prisons from the POV of 24 students on a prison tour.

Can’t wait for next year’s fest.