Skip to content
Elephant Parade Has Arrived in the U.S. 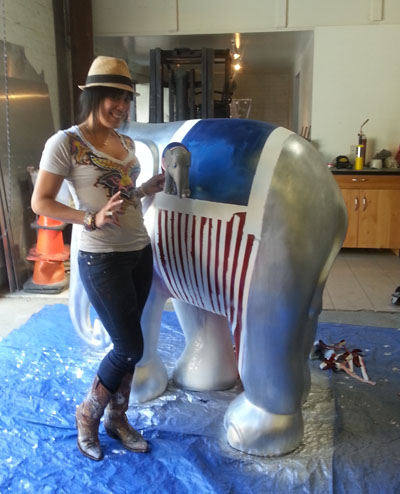 The international event, Elephant Parade is finally here…in America. The four-month exhibition will take place in Dana Point, CA. EP was created to raise awareness about the dangers that many Asian elephants face everyday. Celebrities, TV personalities and artists have come together to support this important cause.

Artist Sona Mirzaei first became involved with EP back in 2010. She was the only American female involved in both the Copenhagen and Singapore Elephant Parade. Sona has been busy working on two elephants for the “Elephant Parade” here in the U.S. In addition to her solo elephant, ‘Triumph of Liberty,’ she has also worked on another one (‘Rothkofant’) with actor Daniel Benzali.

Founded in 2008 by father and son, Marc and Mike Spits after Marc had the chance to meet a baby elephant named Mosha in Thailand, who had a prosthetic limb due to losing a leg from stepping on a landmine.

Sona has loved elephants as long as she can remember, dating back to her affection for the children’s story Babar. “I fell in love with elephants at an early age and when I experienced being with them at local zoo’s here in Southern California, even from watching Babar as a child but my trip to Thailand really did deepen my love, affection, for them and connection. I truly see elephants being pillars of the Earth as I see whales being this of our oceanic world and its important that we make sure that they remain here.” 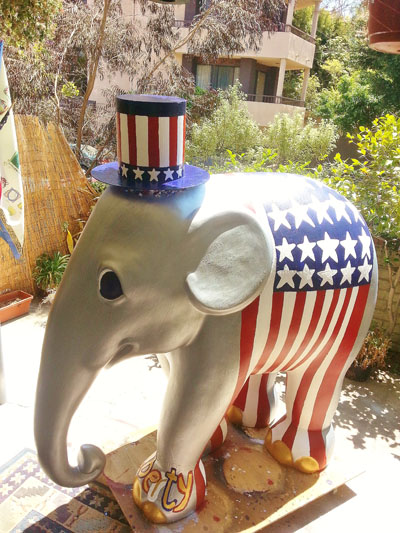 lephant Parade: Welcome to America” will be on display in Dana Point, CA from August 22nd through November 2013. The exhibition will feature Elephants by Li Bingbing, Lily Tomlin and Loree Rodkin with involvement from Hollywood favorites such as Tobey Maguire, Gwyneth Paltrow, Ellen Degeneres and more. Then the elephant statues will be auctioned in mid November.

There will be various events happening in various places (in and around Dana Point) over the four-month period. There was a kick off event open to the public on August 23rd at Doheny State Beach, 25300 Dana point Harbor Drive Dana point, CA 92629. The elephants will remain on view in various locations in Dana Point through mid-November.

For more info on elephant locations and upcoming events, be sure to check the Elephant Parade website at  http://www.elephantparade.com