During the day…stop by STREET, the first-ever global street art fair, for its final day ( of a 3 day event) – 2015 at Siren Studios located at 1050 North Orange Drive, Los Angeles CA. 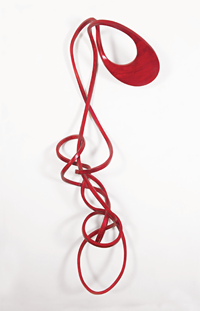 BERT BERMAN GALLERY presents three artist talks including: John Rose, Mary Beth Heffernan, and Mr. Fish! Followed by a book signing with Mr. Fish and a work-in-progress screening of the new documentary on Mr. Fish. Attendance is free and open to the public.

“Knot Chaos” featuring the sculptures by John Rose is currently on view.

At 3pm, meet with artist John Rose as he discusses his new exhibition Knot Chaos. Rose’s works feature all twisting and bending poplar wood sculptures – no two are alike! These works reflect past memories, experiences – everything is vibrating in these ebbing and flowing works.

Then at 4pm, artist and political cartoonist, Mr. Fish (aka Dwayne Booth) along with Robert Scheer (Editor in Chief of Truthdig.com), will engage in a discussion of Fish’s political cartoons and the power this media has in engaging the public. This discussion is in celebration of Mr. Fish’s new book – WARNING! GRAPHIC CONTENT.

t 5pm, stay after the Mr. Fish artist talk for a work-in-progress screening of Mr. Fish: Cartooning From the Deep End – a documentary on the work and life of Mr. Fish (Dwayne Booth). The filmmakers will be present for feedback and Q&A.

The William Turner Gallery is pleased to present J Street, a series of new works by Greg Miller. Following a recent move to New York, history and how we make it, has been weighing on Miller’s mind. J Street, named for the main drag in Miller’s hometown of Sacramento, CA, is a collection of paintings that explores the ways in which we carry, preserve and experience our collective and individual histories. 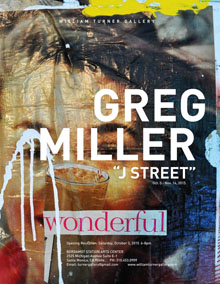 Miller’s work synthesizes a number of elements both contemporary and age-old. Critic Peter Frank remarks, “Greg Miller brings the pictorial poise of Pop to the eloquent fury of street art, effecting a marriage – or at least a torrid affair – between two hot items. One item is hot today, the other has been hot for a half century, but in Miller’s hands there is no generation gap, only a spiritual union – one that generates a sky, or at least a wall full of sparks.” With this series in particular, Miller’s practice reaches even further back in time – to the cave paintings of early man. This is a territory he explores by addressing our primal urge to make marks – the human need to declare to posterity “I was here!” Collaged elements project off of the surfaces – Miller has left some of the paintings resin-free, raw and exposed like cave walls or city streets, making the artist’s ritual of creating more tangible and tantalizing.

bG Gallery presents ECO a new series of paintings by Susan Moss. In this new body of work, Susan Moss offers a vibrant, energetic response to environmental and social issues. The emotionally charged yet lyrical paintings attest to her strength, precise control of color and depth, and her maverick originality.

long term breast cancer survivor, Moss is a strong advocate for women’s issues, health, and healing through her work. A series of health and life obstacles have stood in Moss’s path, only to be overcome with a new series of work. She began experimenting with spray paint in the 70’s creating large color-field works that gained her a reputation and collector base. Severe respiratory issues resulting from the spray led her to a new series using acrylic binding. The Black Forrest series, in memory to her grandparents who perished in concentration camps during WWII, was rescued from 3 studio fires. By far the biggest obstacle was cancer, which the artist incredibly fought without the use of modern medicine. She has now emerged with new works using non toxic paints including mediums of her own invention, giving the work a unique organic texture. 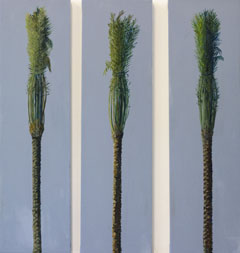 In her most recent body of work, artist Fielden Harper explores the concepts of renewal and growth, both personally and environmentally. As we experience our most severe drought to date, Southern California residents have begun to see a change in the landscape they once knew. Although transformed by the new conditions, Harper’s work symbolizes the continued beauty that can be found in adapting to our changing surroundings, reminding us that every challenge we encounter is an opportunity for growth.

The sculptures in Della Rollé’s current exhibition, Surfaces, represent her continued experimentation with modern techniques and interlaces them with traditional bronzes.

Donn Delson’s exhibition is a visual study of stillness and motion in Death Valley and the Mojave Desert.

There will be an artist talk on Saturday, October 17th, at 3pm.

The G2 Gallery will premiere “Off the Beaten Path: Views from Yosemite,” a photography exhibit in honor of the park’s 125th anniv 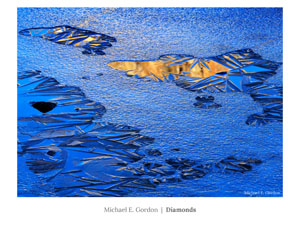 ersary featuring both renowned artists and talented hobbyists. “Off the Beaten Path” is the latest of several multi-artist, open-submission exhibitions put on by The G2 Gallery in 2015.

Admission is $10 at the door and includes wine, hors d’oeuvres and complimentary valet in front of the gallery. All proceeds from admissions will be donated to the Yosemite Conservancy. RSVP to rsvp@theg2gallery.com 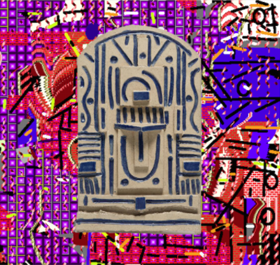 Wallspace is pleased to present the solo exhibition “Places Snake Plissken Escaped from” by Marz Jr. with an artist reception Saturday October 3 from 7-9pm. 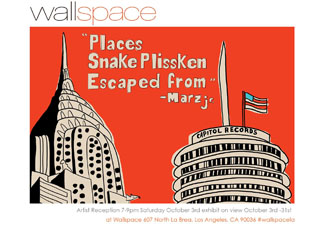 aces Snake Plissken Escaped from” is an homage to iconic buildings from New York City and Los Angeles, drawn with simple lines but imbued with bright color and nostalgia. “The pieces are based on my visual memory, mostly through movies, of the cities I loved before living in them myself. My goal was to create fun, simple, peaceful images that the viewer can relate to and allow them to connect to in their own personal way – either through their own memories of living in the cities, or through movies or images from books or photos,” says artist Marz Jr. 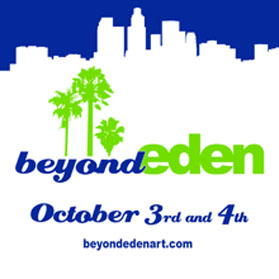 The fifth and final edition of Beyond Eden will once again be hosted by the Los Angeles Municipal Art Gallery at Barnsdall Park this coming October. Beyond Eden is a multi-gallery event celebrating the New Contemporary art movement in Los Angeles put together by Andrew Hosner (co-owner / curator at Thinkspace) and made possible by the City Of Los Angeles Department of Cultural Affairs.

The public is invited to attend this special event and admission will be $5 and open to all.

In the Silverlake adjacent area…

Michael Christy’s exhibition entitled Genre Paintings will delve into the surreal worlds he is known for, with bright neon colors and intriguing interactions between real and imagined biospheres and beings. Jeffrey Gillette, one of Banksy’s Dismaland artists, is showing a group of paintings entitled DREAD, featuring his signature style of beautifully rendered, never-ending slums juxtaposed with contemporary icons and marks. Phobik’s exhibition entitled Figments and Particles will revolve around his channeled world of The Phobik God using both contemporary and classic painting styles to illuminate his imaginary realm. Rounding out the four, realfake: UNKNOWN by CANTSTOPGOODBOY will elaborate on his vibrant starburst flair surrounding iconic American images of icons and superhero’s.

CHG Circa presents “Your Pencilled Masses, Yearning To Be Free,” a group exhibition and the final show at this location. Yes CHG Circa is moving…but wanted to throw one last art party at this venue.

The group exhibition will explore the innocence and simplicity of a medium that is not often used in fine art gallery exhibitions, CHG has enlisted some of the top artists in the New Contemporary Art Movement to create new works with colored pencils that carry the themes of their paintings, but in a lighter and gentler presentation.

What: Opening reception
Where: CHG Circa: 8530A Washington Blvd. Culver City, CA 90232 (the last exhibition at this location)
When: 7:00pm – 10:00pm – Saturday, October 3
Website: www.coreyhelfordgallery.com 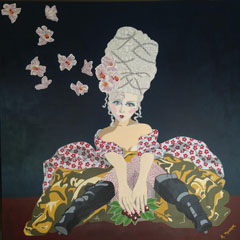 Close by….Hive Gallery presents “Secret Art of Animators 2,” curated by Josephine Huang and Stephen Holman. Star Wars, Nightmare before Christmas, Family guy, Metalocalypse, Coraline……if you like these shows/movies creators, directors and artists of these films and many more will be exhibiting personal artwork at the Hive this month! 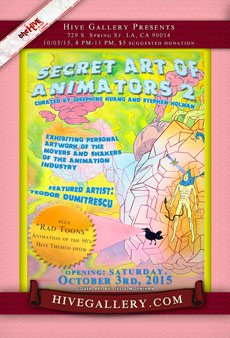