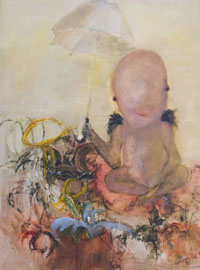 Allois’ new body of work is grounded in the painterly style of the Romantic movement and informed by a decidedly contemporary point of view. Allois’ Turner-esque seascapes depict ships struggling against the blows of pounding waves.  But somewhere in the darkness, a subtle light glows, assuring the viewer that all is not lost.

For more info about this artist and bG Gallery, visit our Upcoming Events Page. 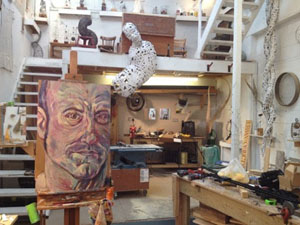 Aaron Kramer is a multidimensional artist who works in wood, metal and paint. He is an inventor of “contraptions,” a weaver and a painter.

This self reflective body of work was developed on a recent 3 year hiatus in London. In this time he explored new materials and techniques surrounding the theme of the “Selfie”, that innate desire that most people have to say, “I was here” with an arm’s length snapshot in time. His portraits are rough and direct. Painted on found wooden panels recovered on his daily bicycle commute to the studio. His machines are mesmerizing mechanical wonders. Twisted and welded wire, hand cut wooden gears and even a machine that draws selfies! All of these works explore the deeper meanings of identity, place and self. “

Complimentary valet parking available the night of the opening. 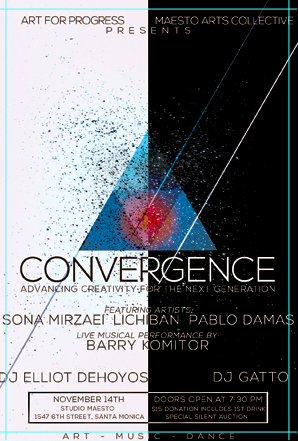 The event will take place at Studio Maesto’s dance and photography studio and will feature visual art from three Los Angeles based artists who have exhibited with AFP in the past- Sona Mirzaei, Lichiban and Pablo Damas. The night will also showcase live performances from Barry Komitor (NYC based band Bad Faces), DJ sets from NYC’s Gatto, LA based DJ/Producer Elliot DeHoyos and a myriad of local performance artists.

See our Upcoming Events Page for a full listing and to find out more about the artists. To find our more about artist Sona Mirzaei, visit her website HERE. 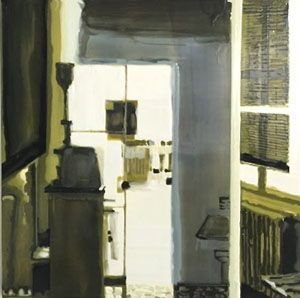 1301PE, for the fifth solo exhibition with Los Angeles based artist Kirsten Everberg.

Everbergʼs latest body of work takes the working and living space of film director and writer Ingmar Bergman on the remote island of Fårö, Sweden, as a point of departure to explore the ways in which creative spaces are constructed and operate as sites of production.

The new paintings presented at 1301PE continue Everbergʼs interest in the history and practice of filmmaking, thereby exploring the interplay between memory, fragmentation, photography, cinema and the subjective nature of perception. 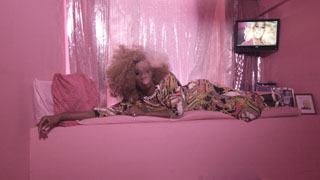 nat Ebgi Gallery is pleased to present “If She Hollers,” a solo show of new video, photography and installation works by Jen DeNike.

Mining Hollywood filmic archetypes and the cult of masculinity, Jen DeNike presents a series of three vignettes that challenge static notions of gender, race and sexuality.

Taking the exhibition name from Chester Himes’ 1945 novel If He Hollers, Let Him Go, DeNike traces the motivations of Himes’ protagonist who fails to find a more tolerant and accepting society in the Californian idyll. DeNike expands on this sense of lost paradise in her new body of work, with characters confronting the limits of gendered roles and struggling to transform themselves in settings laden with thematic significance.

See image: Dirk De Bruycker, Flood Yellow,
mixed media on canvas, 48 x 36 x 2 inches
Dirk will be greatly missed but his contributions to the art world will live on. While it is bittersweet, FP Contemporary looks forward to sharing this beautiful retrospective exhibition including several of De Bruycker’s earlier works from the 1990’s as well as never-before-seen paintings in this exhibition. 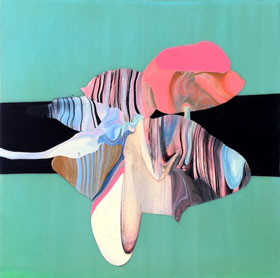 Dominated by colorful biomorphic shapes, Lane’s latest paintings bloom in an abundance of floral and fluorescent shades against dusty ochres, pale blues and pinks. An uncertain sense of gravity reigns in these mercurial works, pulling some shapes downwards like drops of tree-sap welling from broken branches; while in others the paint seems weightless, as if floating on the surface of a still pond. At times it is difficult to discern the exact number of shapes involved, or to separate bodies as they melt into each other, swapping traces of color, form and patterns in the process. 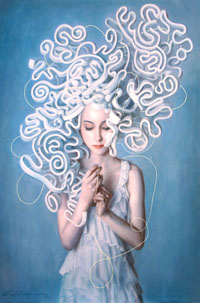 In his latest body of work, “Watch the Skies,” Travis Louie finds inspiration in atomic age science fiction films of the 1950s and the pseudoscience of extraterrestrial life popularized by UFO theories in the 1970s. Louie’s careful technique lends even his most fantastical images an air of authenticity. By meticulously applying acrylic paint in transparent layers like watercolors, the artist masterfully recreates the gelatin-silver feel of early daguerreotype photographs.

RSVP required to rsvp@kpprojects.net :: Gust List at the door

Another event close by… 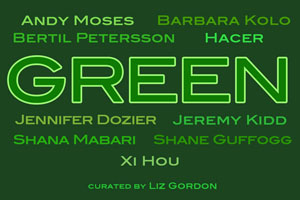 The Loft at LIz’s offers an opening reception for its newest exhibition “Green.”

In the Rampart District… 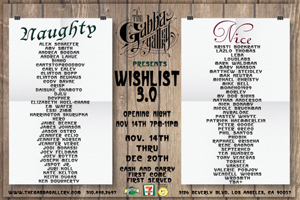 The Gabba Gallery presents Wishlist 3.0, the ever-evolving, cash-and-carry exhibition of contemporary artwork at exceptionally affordable prices.  Featuring more than 60 artists and a price cap of $1000, the third annual edition of Wishlist once again promises a dynamic visual voyage as sold works are removed and replaced by new pieces.

For the Wishlist 3.0 art exhibition (#wishlist2015), The Gabba Gallery brings together a wide range of artists’ works just in time for holiday gift giving (and maybe even some personal collecting), all priced at $1000 or less.  The gallery’s curatorial prowess shines during this vibrant, spirited exhibition.  Artists such as Binho, Rene Gagnon, and Moncho1929, whose work can also be seen donning the walls around the gallery as part of #AlleyProject, the 100+ murals in the area, also known as “The Gabba Arts District” (#gabbaartsdistrict), are among those showing.

Artist Jennifer Verge will be a part of this show and will be featuring three artworks. For more information about the art of Jennifer Verge, visit her website at http://jenniferverge.com/

See our Upcoming Events Page for more information about this event.

In Chinatown…Automata (504 Chung King Road, LA 90012) hosts one more performance tonight.The Reader’s Chorus consists of composers and musicians, visual artists and filmmakers, writers and poets. Initially brought together to perform Robert Lax and John Beer’s rarely performed Black White Oratorio, we were inspired by this hallucinogenic poem and the possibilities of sound in a group of speaking voices. Sara Roberts and Jordan Biren recruited a dedicated corps to experiment with timbral combinations, rhythms, and the spatialization of voices. Since then members have been creating new works for the Chorus to develop and arrange in laboratory rehearsal. Performance runs from 8-9pm; Admission $15; 213-819-6855;

CHIMENTO CONTEMPORARY is pleased to announce its second exhibition with new work by artist Chris Finley. 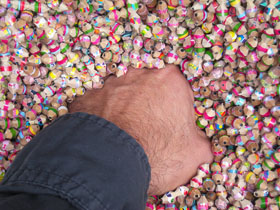 It is an artist’s impulse to make things by hand, by any means necessary, with whatever materials are available. In Chris Finley’s new works, he takes that innovative arte povera-infused immediacy to heart, developing a series of paintings as well as sculptural assemblages constructed from a combination of store-bought, lived-in objects and original images conveying multiple narratives. From yoga balls to baby wipes, used slippers to pencil shavings, plastic containers and manipulated portraits, Finley’s deceptively casual assortments address topics including but not limited to a formalist take on planar transparency, the alarming prevalence of cheaply made plastic goods coupled with the American instinct for acquisition, an indictment of economic disparity due to the control exerted by corporations over our daily lives, and the nostalgic and mnemonic narrative potential of the re-purposed object.

DAC Gallery presents a group show titled “Translations for Co-conspirators.” Curated by  Eugenia Barbuc, the exhibtion investigates alternative narratives by way of collaboration and process. Using repurposed material donated by IRS Demo, the exhibition underscores the transformative potential of commonplace materials, and the unique language that develops between artists through collaborative practice. 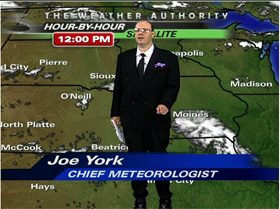 See image of still from film by Adam Frelin

The exhibition will also be featuring a film by New York-based artist Adam Frelin. The film was made in collaboration with a uniquely-abled man who is obsessed with meteorology and narrated the piece, commenting on storms as they were happening in the region during the making of the film. Works on display will feature the resulting collaborations, which range from sound-based and experimental videos, to photographic and design-based works.A

Music lovers…head to West Hollywood…to the Troubador, to see Dave an Phll Alvin. Check the Troubador website for times and admission.