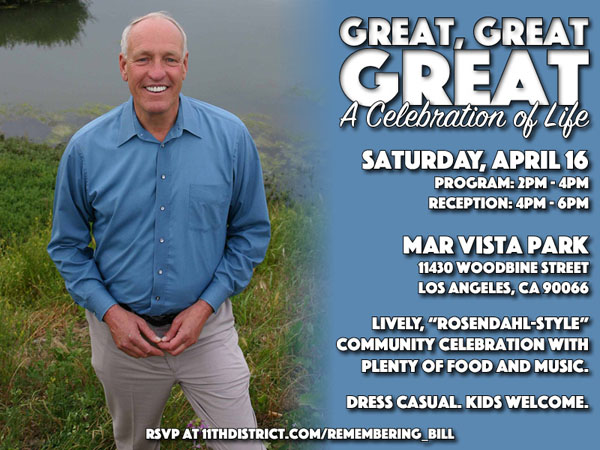 I have lived in Venice since 1999 and participated in many community events will Bill. He was a great supporter of Venice!

The event is organized by Councilman Bonin, who will be there, along with Mayor Garcetti. Patt Morrison is the MC.

The speakers are from all parts of Bill’s life, from his cable days, his work on Presidential campaigns, and the LGBT community.

Music and performances are from Bill’s favorites, including Christmas music, drummers, a poem read by Pegarty Long, – and The band Venice plays. 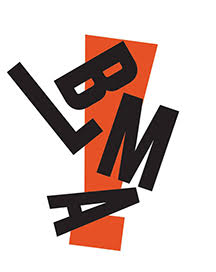 This first show will introduce all the artists involved – from Brooklyn and L.A. – to the L.A. community. The exhibition will feature each member artist’s take on the urban environment they inhabit. BLAM Brooklyn will open its first show in May. “Fewer and fewer galleries seemed to be showing local artists,” said BLAM founder David Spanbock, a painter. “It occurred to me that the big players all had multiple venues and that this gave them higher visibility. Why couldn’t emerging and midcareer artists do the same thing?”

Just across the street… 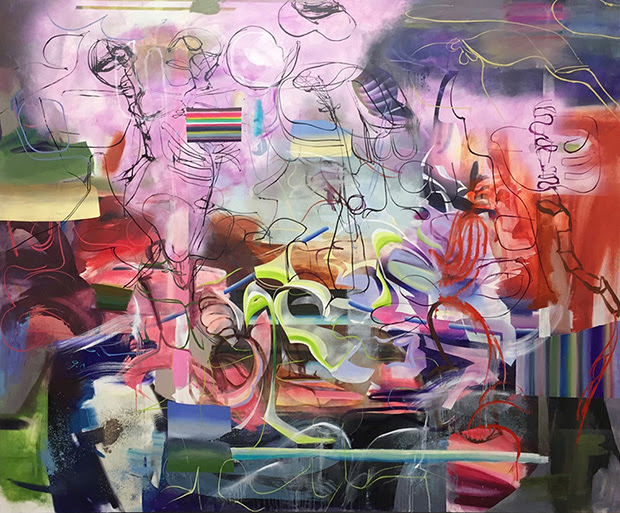 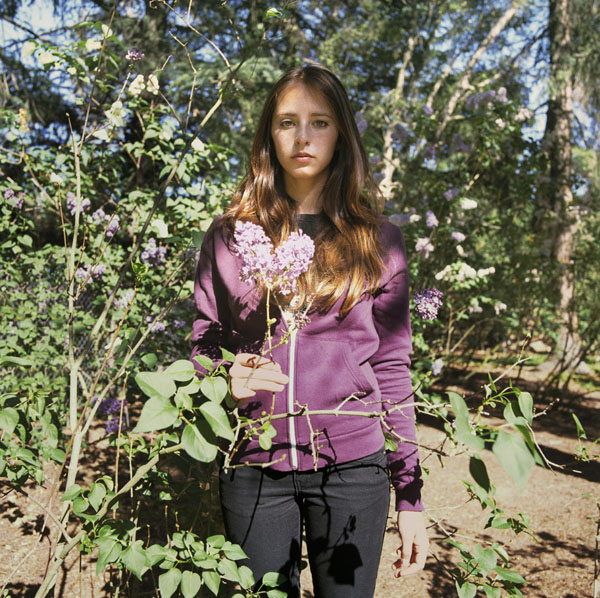 Photographer Laura London’s new series comprises a video work with audio; as well as photography, in an eight-part portrait series in two folios plus a triptych. In both content and meaning, as well as technology and technique, these images represented a re-examination and directed evolution of her iconic celebrity-culture critiques of 2000-2012 and the series of work exploring teen identity from 1995-1999. While those works took aim at the perverse and pervasive influence of celebrity through the prism of the American teen-ager, in 2015-16, the new problem is selfie culture, and its new face is the Millennial.

In the Venice/Mar Vista area… 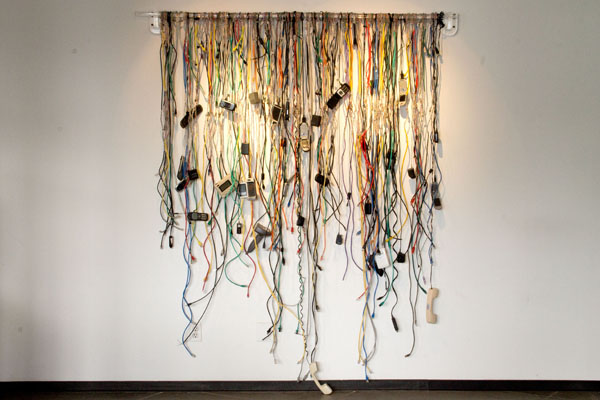 New works by Delicious Taste are woven of contemporary carriers of information: data, signal, current, codes and intelligence. Their artworks, which on the surface resemble works made of fiber, reflect the meaning in our current society based on computers. Reliving the days of playing NOKIA’s “Snake” the artists use phones as well as vintage SPACE AGE monitors and surveillance cameras as a contemporary nod to George Orwell’s iconic dystopian novel 1984. Delicious Taste invite viewers to haptically immerse themselves in the artworks by “reading” the knots with their hands through touch.

*a new collaboration between Bruce Yonemoto and Grant Levy-Doolittle

In the mid-Whilshire area…Icon Projects (5450 Wilshire Blvd., LA 90036) offers a MOPLA exhibition and opening for Dennis Keeley from 5-8pm. 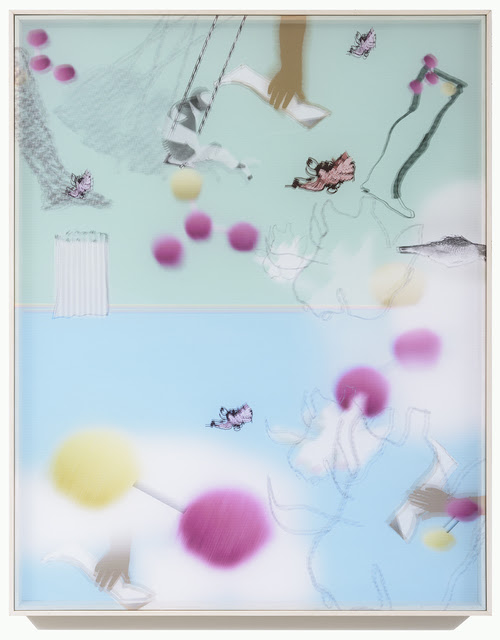 “Four acts and a landscape” is comprised of mixed media objects that employ prints on fabric in a shadow-box format. This exhibition is the artist’s first solo show in the United States and her first with the gallery. 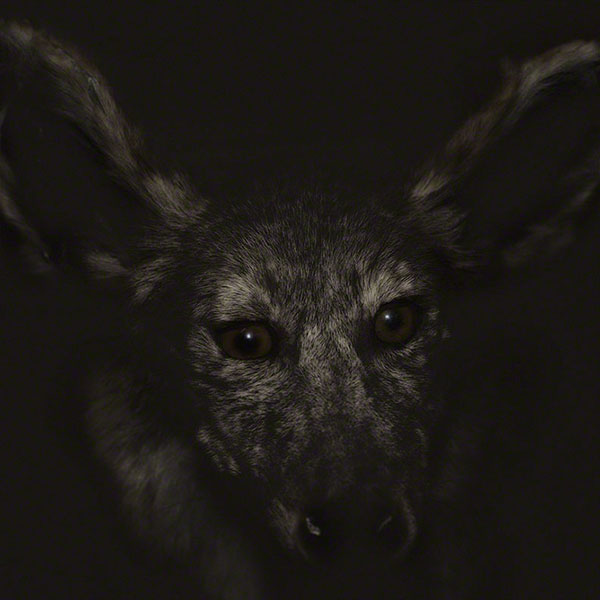 bition to celebrate MOPLA titled “Monster Photo Gestalt.” Gallery Owner and curator Om Bleicher will assemble close-up photos of animal and human body parts by a variety of photographers into an imaginative composition including a surreal landscape populated by composite “monsters.” 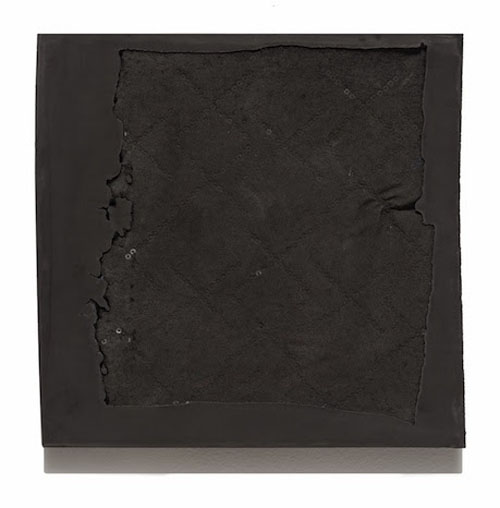 The exhibition will consist of both abstract and figurative objects, some of which have been impregnated with sequins or pigmented with pastel print patterns. 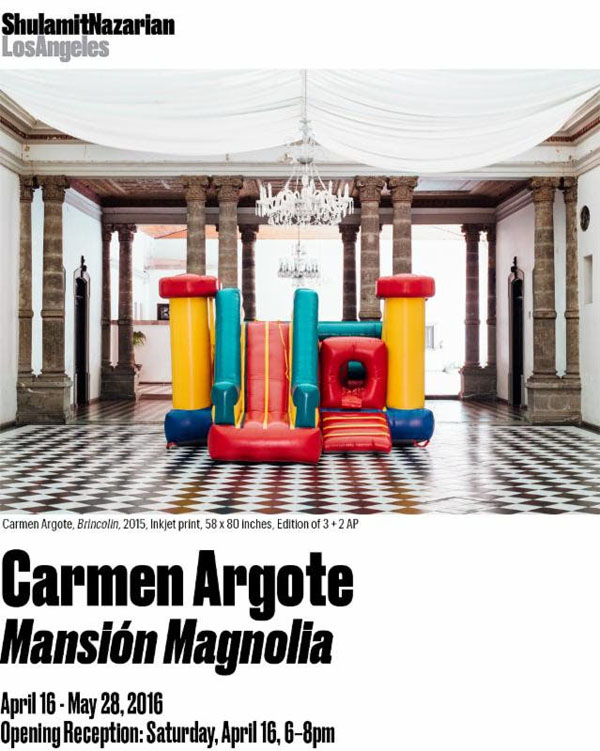 Argote developed this body of work in Guadalajara, Mexico, while inhabiting Mansión Magnolia, her ancestral home turned public events space. The works produced within the mansion explore the ways in which domestic space can impact the body and construct notions of self. The photographs also serve as an extension of the artist’s previous installations, which explore memory, architecture, and the notion of home through the modification of physical space. 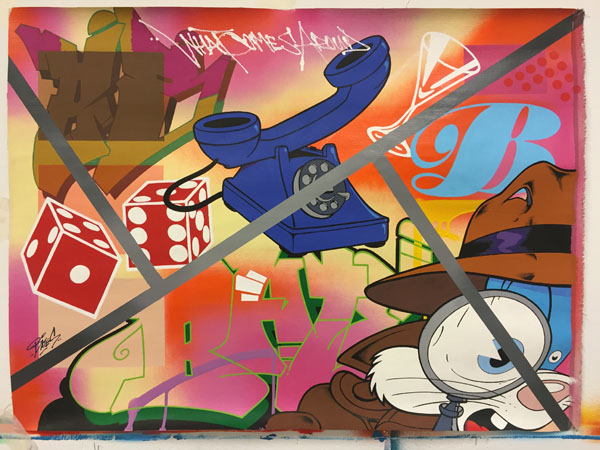 The exhibition testifies to BATES’s impact on the world of graffiti and his contribution to contemporary art in general. His stylistic elegance is purposeful and uninhibited. With the internationalization of European graffiti in the early 1990s, he soon became one of the most sought after artists for big venues around the continent and overseas.  His iconic graffiti writing derives inspiration from comic books, sculptures and color palettes in their fleeting observations and compositional sophistication.

Charlie James Gallery is delighted to present LA-based artist Ramiro Gomez in his third solo show with the gallery titled On Melrose opening Saturday, April 16th from 6-9pm. This show will feature Gomez’s largest show of painting and installation to date.

tore, Los Angeles, 2015, Acrylic on canvas, 72 x 72 inches
Book Release – Signing: Lawrence Weschler’s new book on Ramiro Gomez titled Domestic Scenes: The Art of Ramiro Gomez (Abrams) will be celebrated during the reception as well. Copies of the book will be available and Gomez will be signing.

In the mid Wilshire area… 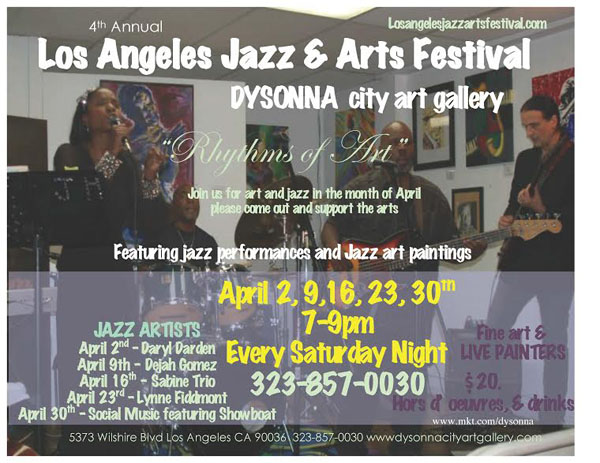 ch event will feature Hors d’oeuvres, local wines, with special jazz-inspired desserts and served during a live jazz performance every Saturday in April, from 7-9 p.m.

Come support the musicians and artists as they help bring awareness to Jazz Appreciation month. Admission is $20,which includes hors d’oeuvres and wine. Proceeds from the fundraiser will support the Art. Keep Creating Art education programs. CLICK Here to purchase Tickets https://squareup.com/market/dysonna