What a wonderful night of art, culture, history, sound and soul at the beautiful and newly remodeled, open air Ford amphitheater nestled in the Hollywood Hills on Sunday, August 11th!

Hosted by Oscar-Winning actor and entertainer, Don Cheadle and KCRW’s on-air hero, Garth Trinidad, the night began with a set by LA-based Katalyst Collective, an ensemble from Inglewood, comprised of nine talented and fast-rising jazz musicians. Their effusive sound was mesmerizing and their compositions were filled with a variety of musical influences, rich textures and unusual percussion.

Don Cheadle received a warm welcome when he appeared on stage. In addition to his iconic role as War Machine in Marvel’s Avengers movies, he’s also an artist and activist, a patron and player in the world of jazz. In fact, he’s the co-founder, co-chair and key collaborator of The Nonsemble. In celebration of South Africa’s National Women’s Day, Don introduced two of South Africa’s premier jazz musicians, Siya Mukazeni and Thandi Ntuli for their very first performance in the United States! We were so lucky to see these two young and truly original voices perform and infuse rock, soul, funk and post punk into their Afro-futuristic Jazz. 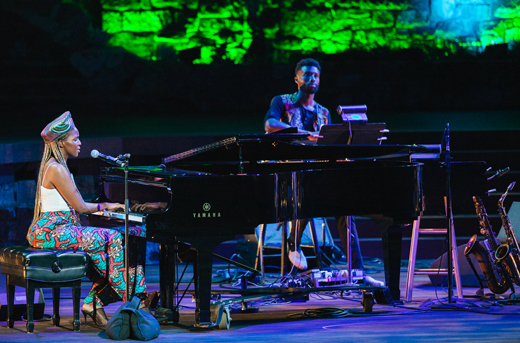 Next, Garth Trinidad helped set the stage and also received a warm welcome from the audience. He introduced Thandi Ntuli backed by The Katalyst Collective. Ntuli, who originally studied classical piano, and later jazz performance at The University of Cape Town, played piano passionately and was skillfully accompanied by The Katalyst Collective. Her soulful voice filled the amphitheater, and she gave a very powerful and heartfelt performance. Her unique voice had echoes of soul, jazz and social commentary with a quiet, vulnerable strength.

After a short intermission, Garth introduced Siya Mukazeni, a producer, composer, vocalist, trombonist and bandleader. She grew up singing in choir in Eastern Cape and took up the trombone in high school in East London. Her genre-jumping musical styles are Influenced by drum and base, hip hop, rock’n’roll, soul and post-modern-contemporary Blacktronica. Again, accompanied by the Katalyst Collective, Siya commanded the stage. Her sublime vocals were enhanced by the brilliance of the Katalyst Collective; her unique trombone playing was as fun and festive as her dancing around the stage. We were dancing along in our seats!

Performances at the Ford Theatres run through Nov. 8, 2019, plus lease events and Jam Session. Admission varies – be sure to visit the website for a full schedule with ticket prices, etc. https://www.fordtheatres.org