The classical Greek myth tells of Princess Iphigenia, daughter of King Agamemnon, who is ritually sacrificed to amend for the slaying of a sacred stag cherished by the goddess Artemis, who, in revenge, stops the winds from blowing and prevents the Greek ships from sailing in anticipation of beginning the Trojan War.

With music composed by Wayne Shorter and libretto by esperanza spalding, who also performs. “ … (Iphigenia)” is performed without intermission for 110 minutes in three acts that explore the storyline in a divergent and unique manner and from the female as protagonist perspective.

In Act 1, we are introduced to Usher, performed by Brenda Pressley, who provides commentary in a contemporary voice. In this act, the killing of the stag has occurred, and the Greek army pumped up with the prospect of war, drunkenly hoot and holler, and ceremonially kill, not one, but five different Iphigenias who are then placed prone upstage adjacent to the dead stag. One bizarre moment occurs when a soldier runs across stage carrying a plastic blow-up doll that represents Helen of Troy. The Usher comments, in reference to the multiple killings, “This is not supposed to happen.” 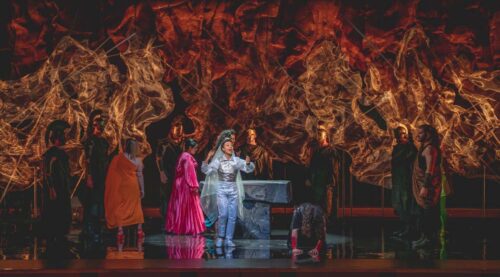 In Act 2, the initial stage backdrop of a forest has dropped, and the jazz combo is revealed. Usher says to the now living chorus of Iphigenias, “This is where you really are.” In this time and space warp they sing with distinctive vocal styles of their respective traumatic stories and seek to reveal, amongst themselves, who is the one Iphigenia who can break the pattern of the myth. spalding, dressed uniquely in a silver jump suit, emerges as Iphigenia of the Open Tense, and, in contrast to the others who sing, she attempts to find her voice as she riffs in tonal vocalizations.

In Act 3, the stage is now filled with gleaming moveable sculptures. In another moment of surreal engagement, one of the Iphigenia’s, holding a microphone and with a videographer on stage, speaks to audience alluding to having performed her role on this stage before. She exits and the soldiers reappear and Iphigenia of the Open Tense, wearing a bridal veil and appearing a bit dazed, is once again in the myth. She now sings boldly, first offering herself as a sacrifice, and joins with the other Iphigenias to slowly and silently walk away. Likewise, the Usher appears and gives us a sly ambiguous look as she also exits.

As a footnote, I think it is interesting to hear about what went into this multi-year collaborative effort that illuminates the value of the creative process in making a complex work; so, may I suggest you CLICK HERE to check the youtube video.