Thank goodness for Lula Washington and her dance company for presenting a three-night series of poignant performances at the Wallis Center for Cultural Affairs on the Martin Luther King Jr. Holiday weekend that offered a counter balance to the recent rhetoric coming from our current administration.

The third evening program called Movement for the Soul began with a dramatic history lesson, “The Little Rock Nine” portrayed the African-American student integration of Central High School in Arkansas on September 25, 1957 and highlighted dancers interpreting the spirit of the students who were present that day. “The Movement” , evoked the civil rights movement using a slide presentation showing the harsh reality images of Jim Crow racial segregation and lynchings along with the iconic experience of Rosa Parks (danced to “It Had to Be You”) and an extended overpowering recording of speeches by Martin Luther King, Jr. These pieces were commissioned for the 50th anniversary of the Little Rock Nine and choreographed by Lula Washington who was born just outside Little Rock.

After a pause, the tone shifted to the playful frolics of children in “Snowy Day” choreographed by Tamica Washington Miller with music by Liz Story and narrative based on the book by Ezra Jack Keats that captured the wonder of the first day of snow as experienced by a little boy and his friends in the city. “Reign” (2010) choreographed by Rennie Harris with a music mix produced by James “JT” Wlconson elevated the audience’s spirit with the high impact energy of the rhythmic beat and frenzy of delightful abandon moves of hip hop, African dance and touches of Krump performed by the core troupe joined by apprentices and student dancers. 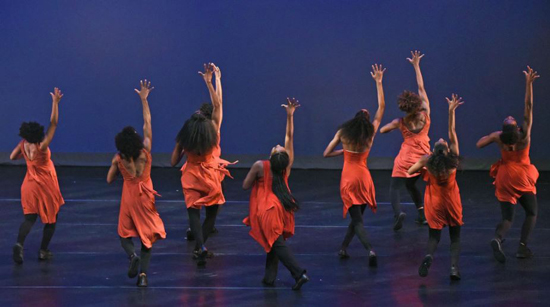 After the intermission, we were engaged in “The Message” (2017) that brought four dancers into a taped off rectangle on the floor offering us their personal expressions in movement and words in response to the social and cultural dynamics that effect them, be it LGBTQ or the temperament of “45,” and culminating with the clearly articulated heartfelt message of “we are all human and deserve peace, love and respect.”

The final work, “Open Your Eyes” (2016), choreographed to five songs from the 1970’s by Earth Wind and Fire once again embodied the uplifted freedom of the human spirit that hopefully is not lost to us today. Concluding the evening, Lula Washington came to the stage, had the dancers introduce themselves, then enjoined us all to stand, link hands and express “love” to those next to us, and as we left to convene in the lobby for a toast and acknowledgement of our shared and interdependent humanity.