Commissioned by BroadStage, the Mark Morris Dance Group presented the world premiere of “The Look of Love,” a journey into the sweetness and sorrowful emotions of romantic love as evoked by the music of Burt Bacharach.

Before the curtain rises, the show begins with a prelude of “Alfie” performed on solo piano by Ethan Iverson, arranged all the music for the performance. The thing about Bacharach’s music, in and of itself, is that for those of us who grew up in the 1960’s and I imagine afterwards, we instinctively hear in our heads and begin to mouth the lyrics, written by Hal David, and imagine the stories they tell, many of which are associated with film scores. Morris’s choreography exudes a sense of freedom, joy and playfulness that is reinforced by the brightly colored costumes designed by Isaac Mizrahi. The performance moves through 14 iconic songs, beautifully and emotionally sung by and Broadway star Marcy Harriell. The dancers, whose individually is showcased and who collectively and seamlessly merge together, interpret, and play out the narrative in each song using only metal folding chairs to reconfigure the action and movement on the stage. Each dancer wears a uniquely designed outfit, be it a tunic, dress, tights, shorts, pants, all of which are brightly colored and stand out against a changing solid color backdrop. The costumes and pure pleasure expressed by the dancers, and as I said, to me a feel of the 1960’s, conjured a memory of the Eloi, from the film ”The Time Machine,” who survived from a future devastation. 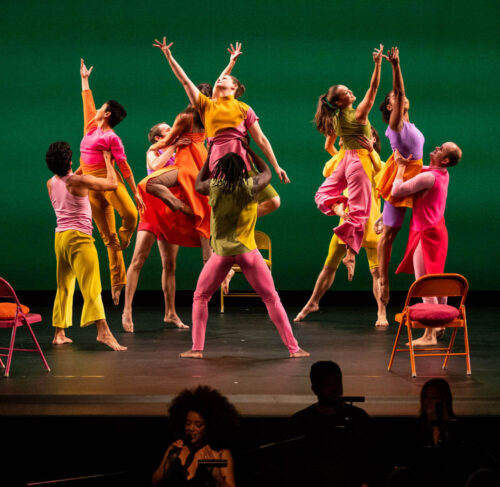 I was sitting close to the orchestra pit, where Marcy Harrell and two backup singers and musicians were and I must admit, that during the performance my eyes occasionally focused on her emotive facial expressions. One curious song included in the performance was “The Blob,” which was Bacharach’s first venture, in 1958, into writing movie theme music. The choreography and lighting for this piece was dark and shadowy as the performers moved to a rhumba beat to the gruffly spoken lyric “beware of the blob, it creeps and leaps and glides and slides across the floor” and ended in an intertwined pile up of bodies.

The bittersweet love songs featured included “The Look of Love,” “Anyone Who Had a Heart,” “Don’t Make Me Over,” “I’ll Never Fall in Love Again,” “Walk on By,” “I Say a Little Prayer,” “There’s Always Something There to Remind Me,” and the highly popular, “Do You Know the Way to San Jose,” and “Raindrops Keep Falling on My Head,” with the performance concluding with “What the World Needs Now is Love” and a collective expression of the word “Amen.” 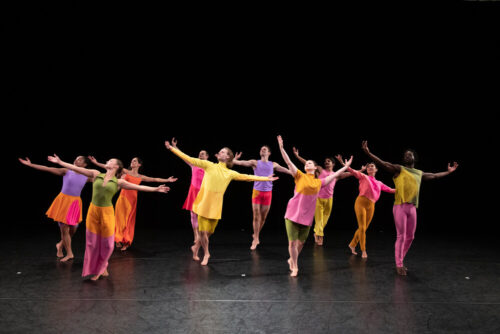 With a rousing standing ovation for the Company, Iverson, xx, the musicians, and Morris and as the curtain began to lower, Morris turned to leave the stage and flashed the “Peace Sign,” leaving us to hopefully go forth with more than just memories.

For more information about the Mark Morris Dance Group, go to markmorrisdancegroup.org

For upcoming performances at BroadStage, go to broadstage.org