Skip to content
Review: American Standard: A Story of Enough

A story of healing unfolded at Highway’s performance space in Santa Monica. Opening on September 19, 2019, the one-woman show entitled American Standard: A Story of Enough stars Lilly Bright, and is directed by Valerie Hager. It is an autobiographical memoir of her journey of bulimia…its seductive entry into her life, the journey, and finally her triumph over this devastating disease. 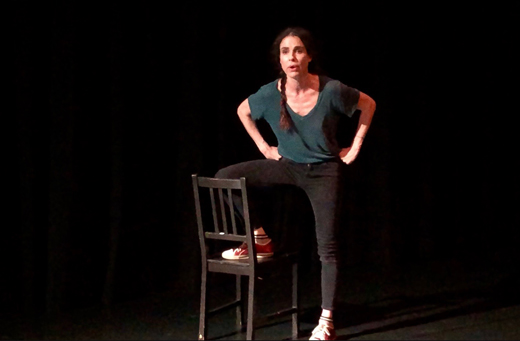 Photo courtesy of the artist

Early on in the performance Bright described her childhood memories of the bathroom from her youth…’the open gaping hole, ‘ as she called it, the odor of the chemical cleaner, the monogrammed towels. This is where it would all begin.

Bright has created well developed characters, which she (as an actress) slips easily in and out of. At a young age, she heard the first voice in her head, who tempted her with food, and then lured her to the bathroom. Soon after another would arise…telling her that she would never be enough. Each character had its own body language completely different from the main character, which made for a wonderful show. Engaging an audience fully in a one-person show is not an easy task. Bright committed to each character and situation with a fierce tenacity.

Although watching much of the dark side of the illness was hard to witness, we, the audience were taken on an undeniably victorious journey. Humor also played a part in this production as she described the various healing techniques she tried, prior to her winning the battle. In the end, having a child would ultimately save her. Her perception of the world grew beyond what she had ever known, and would heal her soul.

As the show was coming to an end, she explained that she returned to her childhood home over the holidays as a mother and adult. Once again, she described the memories that came up for her upon entering the bathroom. The place where it all began. However, this time the experience was very different. Her relationship with the ‘open gaping hole,’ with the brand name American Standard would be forever burned into her memory, but this time she would choose a different path. 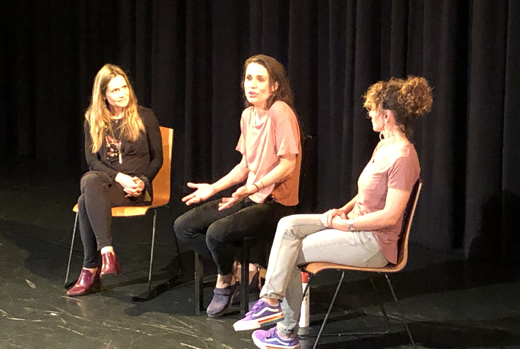 At the end of the performance, a Q & A took place featuring Bright, Valerie Hager (director), and Meredith Sagan, MD, MPH, APC (Child, Adolescent, Adult Psychiatrist and Addiction Specialist). One could tell Meredith Sagan, MD, MPH, APC was quite moved by Bright’s performance and openness to discuss her own experience with the disease. Valerie Hager has a long history of creating and directing one-person shows and did a remarkable job with the piece. Hager told us “I felt it was my job to uncover the underbelly of what she was experiencing.” Hager’s own battle with bulimia and drug addiction was unknown to Bright, prior to them working together. This made their collaboration even more personal.

I highly recommend everyone and anyone to attend this show…whether you have had bulimia, or any type of addiction, survived a harsh background, or witnessed a loved one experiencing this debilitating disease. Bright explained during the Q & A that it has taught her to be a more compassionate person, and hopefully this production will help all of us to let go of judgement and be kinder to each other and ourselves.

There are two more performances September 27th and September 28th at 8:30pm at Highways Performance Space in Santa Monica. Tickets are $25 for general admission and $15 for students. CLICK HERE to purchase tickets. Visit the website to find out more about the show.Highways Performance Space is located at the 18th Street Arts Center, 1651 18th Street, Santa Monica, CA 90404; http://americanstandardshow.com;
https://highwaysperformance.org