Skip to content
Pick of the Week…bG Gallery Presents “As Above, So Below” Saturday, April 11! 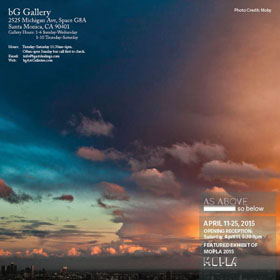 Our Pick of the Week…is a group exhibition titled “As Above, So Below” presented by bG Gallery at Bergamot Station in Santa Monica.

The exhibition is part of MOPLA! Month of Photography Los Angeles, (presented by the Lucie Foundation), is a citywide photography festival taking place all over Los Angeles for the entire month of April.

See my article about MOPLA in this week’s Argonaut Newspaper.

“This is the one time a year in Los Angeles that all photography-related businesses, photographers, organizations and galleries can come together under the umbrella of the still-image and a festival. We should celebrate that,” said MOPLA co-founder Cat Jimenz. She went on to say this year’s theme (Realities and Concepts) was chosen to include a broader group of photographers and curators. “We experiment year to year with what works, what types of collaborations we can explore, how we showcase photography; each year it’s different, and that’s the beauty of a city-wide festival that is malleable.”

Gallery director and co-owner Om Bleicher said “I bounced off the general MOPLA theme of Reality and Concept to come up with the idea. The saying has its roots in mysticism and embraces the idea that our earthly actions paralleling those of heaven’s, or the micro cosmos echoes the cosmos.” 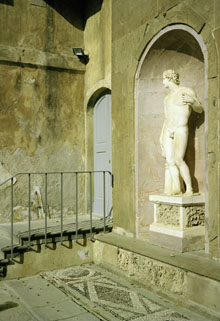 Marco Gualtieri works as a commercial photographer for architectural firms and designers in both Europe and the U.S. He maintains two studios, one in Los Angeles and one in Tuscany. “MOPLA is chock-full of inspiring work from all over L.A., said Gualtieri. “I’m looking forward to both seeing great works and being a part of the bG gallery exhibit. It’s a double win.”

Bleicher chose two of Gualtieri’s works, a detail of the Buontalenti Grotto in the Boboli Gardens of Florence and the other from the Marina di Pisa waterfront in Tuscany. “Marco has a great talent for capturing the extraordinary in the ordinary in a non-glorified way,” said Bleicher. “His work is very grounded and the work in the exhibit shows the earthly reality of religious idols.”

Gualtieri originally started taking photos as a need for self-expression. He visits museums whenever he can and said he finds inspiration through legendary photographers such as Eugene Atget. He visited “Larry Sultan: Here and Home” at LACMA. “I was very impressed by the level of intimacy that emanates from his images.”

The photography of Scott Tansey will also be on view in the group exhibition. Tansey has had the chance to travel extensively and was able to capture some incredible photography. Both shots that are in the show were taken on the same trip. He visited historic locations such as London, Bruges, Amsterdam, the Kiel Canal, Berlin, Copenhagen, Riga, Tallin, St. Petersburg, Helsinki and Stockholm.

ted that his personal highlights were Saint Petersburg and London. “I was able to see how London was once the capital of the world and Berlin, the centerpiece of the Cold War. There is so much bad history, but at the same time, Berlin is now one of the great cities of Europe.”

On his last day in London, Tansey decided to take the London Eye for a bird’s eye view of London. “The view was amazing,” said Tansey. “While waiting in line, I just noticed the view and took the image.” Another image from the show was taken at St. Petersburg at the Church on the Spilled Blood, where Alexander II was assassinated. The photograph was shot from a straight up angle. http://www.scotttanseyphoto.com/

Also on view is the collaboration of photographer Patrick Nagatani and painter, Andree Tracey which features large-format 20 x 24 inch images shot with a Polaroid camera. 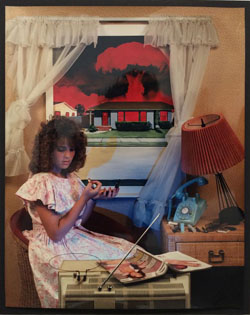 The duo began working together in the 1980s and combines both mediums…some work from that original collaboration will be on view in the exhibit.

It was just two years ago that bG Gallery started featuring photography and it’s proven to be a wise choice. Finally Bleicher added, “Because there is more access to photography I think it is possibly a challenge for artists to create extraordinary mind blowing and soul touching work with the medium but there are many that do and those are the artists we gravitate to.”