Skip to content
Pick of the Week…Patrick Painter Gallery Celebrates the Art of Mike Kelley this Saturday, September 26!

Our Pick of the Week takes place at Patrick Painter Gallery. I can’t say enough about the incomparable Mike Kelley. Working in various media this iconic artist has played an important role in the art world. American made his diverse works have been on view in museums around the world. 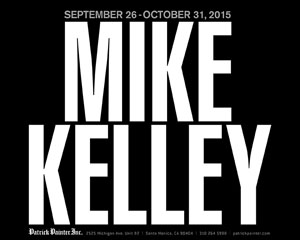 ere’s some more info from the gallery:

Mike Kelley (1954-2012) was one of the most influential American artists of the last 30 years. Before his sudden passing in early 2012, Kelley produced an enormously diverse body of work, which charted the convergence of his Catholic upbringing in Detroit, with the politics of the working class, history, philosophy, and underground music. His art often examined dark themes such as criminality, perversion, and class politics, with a proclivity for pushing the boundaries of subjects considered off-limits. Often overlooked in Kelley’s stunning oeuvre are the enormous range of photo works which added texture and nuance to many of his most well-known series. This exhibition will highlight Kelley’s important photo works of the last twenty years.

Drawing from a variety of sources including memory, nostalgia, architecture, and Americana, Black Garbage (Grassy Island [Canadian]); White Garbage (Bob Lo Island) (2001) presents the viewer with images of garbage as high art. In the colorized diptych we get a startling contradiction of trash and treasure. Garbage, rife with symbolic associations, was a recurring theme in Kelley’s work. Part of Kelley’s Detroit River Project, Kelley photographed images from islands in and around the Detroit River as a testament to the landmarks of his hometown.

The Poetry of Form: Part of an Ongoing Attempt to Develop an Auteur Theory of Naming, (1985/96) is comprised of thirty-four black and white photographs of cave formations. They were originally shot out of books between 1984 and 1985 as part of Kelley’s project, Plato’s Cave, Rothko’s Chapel, Lincoln’s Profile, which ended with a performance at Artist’s Space in New York. In these photos, Kelley bleached or blacked out all evidence of humans. In the mat of each print, Kelley included typeface titles of each rock formation, which reflects Kelley’s interest in the broader implications of auteur naming.

Timeless/Authorless (1995) is a series of black and white photo/text works. The works mimic blowups of newspaper clippings, and each panel is topped by a newspaper masthead. The newspapers, chosen for their veneer of truth, belong to cities where the artist either lived, attended school, or regularly exhibited his artwork. The content of the individual panel texts include real newspaper restaurant reviews and “recovered memories” of personal childhood abuse. This series is part of Kelley’s larger project Missing Time which engaged the phenomena of Repressed Memories. 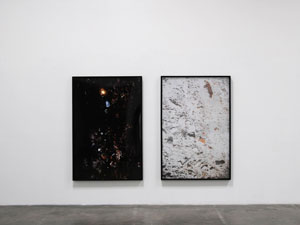 elley was born in Detroit in 1954. He received his BFA from the University of Michigan (1976), and his MFA from the California Institute of the Arts (1978). An exhibition of his Kandor series is currently on view at Hauser & Wirth in New York. A retrospective of Kelley’s work travelled from the Stedelijk Museum in Amsterdam (2012) to the Centre Pompidou in Paris (2013), MoMA PS1 in New York (2013), before ending its run at the Geffen Contemporary at MOCA Los Angeles (2013).