Skip to content
Pick of the Week…”Meta-Paintings and Remixes” and “KISS IDIOMS” Open at Mark Moore Gallery this Saturday!!

The Pick of the Week takes place this Saturday….Mark Moore Gallery hosts two solo exhibitions. “Meta-Paintings and Remixes” is an exhibition of paintings featuring artist, David Klamen, marking the artist’s first solo exhibition with the gallery. 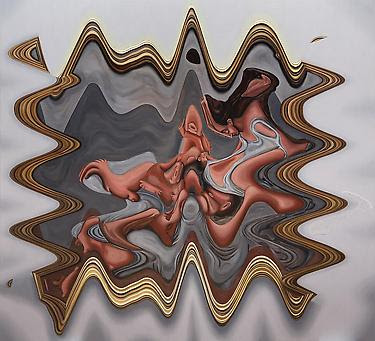 Let’s hear how the gallery describes these new exhibitions:

In this recent body of work, the artist further investigates the nature, source, and limits of knowledge by undermining the foundation of our empirical experience: our sense of sight. In each new painting, Klamen radically re-invents famous paintings from the pre-modern and modern era, overlapping seemingly incompatible artistic visions as a metaphor for our phenomenological search for meaning.

According to Plato’s concept of forms, the world that we know through our senses often deceives us by way of subjective images. Klamen’s multi-canvas installation, “Meta-Paintings” (2013), elaborates on this concept by presenting well-known works of art in a re-contextualized space, highlighting the deception of each image through masterful illusion and imagination.

In these twenty-five smaller paintings, Klamen presents an installation that playfully mimics a salon style hanging. The diagonal slopes created by the various slanting paintings suggest a cubist bas-relief that compresses art historical time periods and physical space. As is the case with nearly all of his paintings, each iconic artwork (as well as its frame, and oftentimes wall label) is meticulously rendered as a representation of a representation, moving further and further from its archetypal form—pointing to a distortion of reality already present in the original image.

To further complicate the simulacrum, Klamen plays with the viewer’s perception by drastically altering the perspective of the painting, tilting the work at an oblique angle within his own canvas. In his “remixes,” Klamen manipulates images from the art historical canon by warping then into optical oscillations full of contingencies and surprises. The psychedelic result suggests a disoriented ocular state that hints at the malleable nature of our reality—a reality that relies heavily on the conviction of our individual experiences. 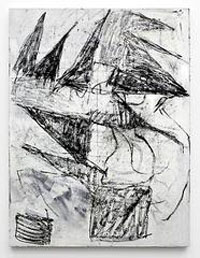 Navigating the tension between serenity and chaos, Hart presents abstracted renditions of physicality; both space and objects become reconstituted gestures or collage. Like blurry snapshots or excerpts from Hart’s active process, elements of his compositions coalesce into a survey of tactility. Abrupt line work, colorful snippets of studio debris, pieces appropriated from his daughter’s sticker cache, and smudged, quilt-like patterns in oil paint, all form loose aesthetic references to Twombly, Joan Mitchell, and Mondrian, but retain a distinctive sense of process and impulse. Through Hart’s methodical destruction and re-building of materials, the cut collages presented in “KISS IDIOMS” appear as edited, autobiographical assemblages, while Hart’s large-scale paintings relay a more primal, latent psychology. Through both techniques, Hart poetically explores the cyclical, nuanced complexity of being, as well as the relationship between chance and kismet.