Skip to content
Pick of the Week…”Ed Moses: Now and Then” Opens at William Turner Gallery this Saturday!!

Our Pick of the We 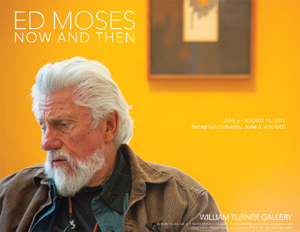 ek is….”ED Moses: Now and Then” opening this Saturday at the William Turner Gallery at Bergamot Station. Ed Moses is one of the most talented and prolific artists of our time. At 89, he is still creating. We are blessed to still have him.

Here is some info from the gallery:
The William Turner Gallery is pleased to present “Ed Moses: Now And Then.” Since the 1950’s, Ed Moses has been at the heart of the LA art scene. Today, his work graces the collections of most of the nation’s major museums and he is regarded by many as a cultural treasure. And yet, Ed Moses does not refer to himself as an artist. He is a painter and mutator – a mark maker and maverick, whose practice is one of ceaseless reinvention. Moses remains a quintessential rebel, having resisted being tied to any one movement for the entirety of his career. As a member of the original stable of artists at the legendary Ferus Gallery, Moses was a compelling presence in the Post-War movement, and remains an influential painter in the contemporary art scene.

This exhibition will survey works spanning Moses’s career, including a selection of brand-new paintings. Continuing his process of reclaiming and reimagining prior works, Moses focuses on the idea of excavation in this latest series. Mining from his own oeuvre, Moses presents us with paintings that are delightfully rugged.

Ed Moses: Now And Then will be mounted concurrently with the Los Angeles County Museum of Art’s exquisitely curated solo exhibition of Ed’s works on paper from the 1960s and 70s, opening in May 2015. Moses has been the subject of a major retrospective at MOCA Los Angeles and last year, was featured in a retrospective at The University of California Irvine, entitled Cross-Section. His work is in the permanent collections of some of the most prominent cultural institutions including the Corcoran Gallery, Hammer Museum, San Francisco MoMA, Whitney Museum of Art and the Museum of Modern Art in New York. 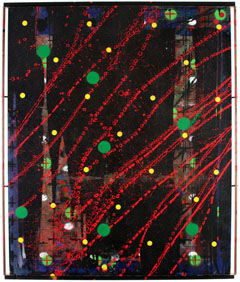