Our Pick of the Week…takes place at Corey Helford Gallery….always a fun art party here and I simply love the new space. Tonight’s event will feature DJ Chris Muckley from KCRW/SiriusXMU…come on out and party!!! 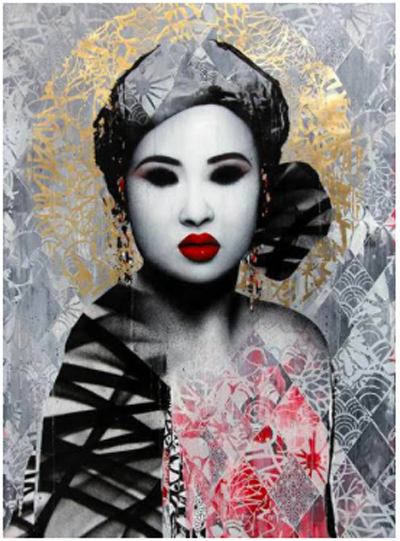 ere is some info direct from the gallery:

HUSH, inspired by detritus, uses futuristic silvers and blacks clothed in a chaotic collage of colour to create a sensual blizzard of femininity, power and loss. Painted in grayscale, often with the eyes blacked out, HUSH’s female faces are dehumanized. By reducing them to shells of sexuality, he perfectly encapsulates the transient nature of modern life as well as the timeless forces of passion and desire. In what appears to be a luxurious and opulent tale, the hidden truth may reveal otherwise. HUSH lets us in, “Classical Sirens and Japanese Geishas, be prepared to be seduced and discarded like a piece of old flypaper.”

By action painting these faces from history, he achieves “pure expressionism”. The collage-effect backgrounds are screen-printed and hand-painted, then the graffiti elements added by hand in the action painting style, sometimes over many months. The final layer of colour replicates sheets of flyposters peeling from our city’s walls whilst the Bravura use of aerosol on the portraits lends the pieces a futuristic sheen, echoing the seductive promise of technological fulfillment.

“Some people think my women are serene, others that they’re dark. What is clear is the power of their sensuality”, says HUSH. The portraits he paints are imposing and alluring, yet confrontational and unobtainable. The implication being that while the pleasures of modern life are fleeting, the succubus legend remains the most potent, rewarding, and perhaps destructive compulsion offered to man.

Also on opening tonight…new works by Lori Nelson in her debut West Coast exhibition, “Cryptotweens Are Like” in Gallery 2. 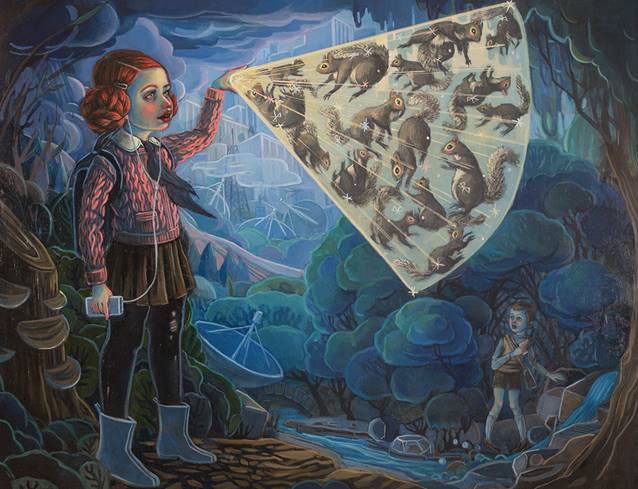 Lori Nelson paints a delightfully bizarre world of yetis, werewolves, and scaly tweens but her subjects are not the freaks and monsters we’ve come to know on the silver screen. Underneath their hairy complexions, horns and scales, Nelson’s “Cryptoweens,” as she calls them, are surprisingly like us. Though certainly monstrous, one might even call them “ugly” or “frightening,” Nelson’s wide-eyed characters with flush cheeks lit by their glowing smart phones, also embody a classical beauty. The Brooklyn-based artist originally grew up in Utah in a religious Mormon family and found herself drawn to reproductions of devotional art and photography in her family’s Bible. Often portrayed with their hands clasped in prayer, her characters carry with them the same wishes and devotions as any “normal” human child. For her debut West Coast solo exhibition, titled “Cryptotweens Are Like,” Lori Nelson expands on her cast of freakishly charming tweens in a series of 16 new oil-on-panel paintings. Like one of the horror genre’s most famous characters, the monster of Frankenstein, Nelson’s are also perpetually misunderstood. Born into innocence, we watch as they experience coming-of-age feelings of insecurity, fear and isolation, and first love.

In Gallery 3…Corey Helford Gallery celebrates the art of Amandine Urruty, Mab Graves, and Yoko d’Holbachie. From Amandine Urruty’s offbeat monochrome drawings, to Mab Graves’s soft, storybook-like illustrations, and Yoko d’Holbachie’s saccharine portraits, these three international artists cover a broad range of styles that push the limits of “character”. Stemming from Pop Surrealism, their art differentiates from the gritty and raw style of the cartoon and counter-culture, and shares in its refined and classically trained aesthetic: sweetly designed characters that must navigate an improbable and more often unforgiving world.  Paris based artist Amandine Urruty has always overflowed her playful and humorous drawings with both Pop-culture based and imagined characters. Urruty is unique in her near-exclusive use of graphite, and despite the medium’s simple nature, she is able to embellish her work with incredible detail and a varied palette, much like painting. Her new series of 10 graphite on paper works, entitled “The Sound and the Furry”, is a continuation of her monochromatic reverie where masked and costumed characters gather in a surrealistic carnival.

Indiana based artist Mab Graves developed her passion for storytelling from a young age. The fantastic dramas set in classic fairytales read to her as a child sparked her imagination, and still provide her with never-ending inspiration. One of her primary goals is to create imagery that brings beauty to a world filled with darkness and suffering, and this is especially true of her new series, entitled “The Epicure.”

Tokyo based artist Yoko d’Holbachie describes herself as someone who is completely immersed in her own dream world. She is well known for her brand of surrealistic paintings, populated with psychedelic-colored cute, yet disconcerting creatures. “I’ve been imagining strange creatures ever since I was a child. Then, after I grew up and learned the basics of creating artworks, I started to use those creatures as the subjects of my paintings,” she says. Within her sugary world of monstrosities, d’Holbachie layers elements of her greatest influences; traditional Japanese folklore and legends, Early Renaissance, and Mannerist painting.