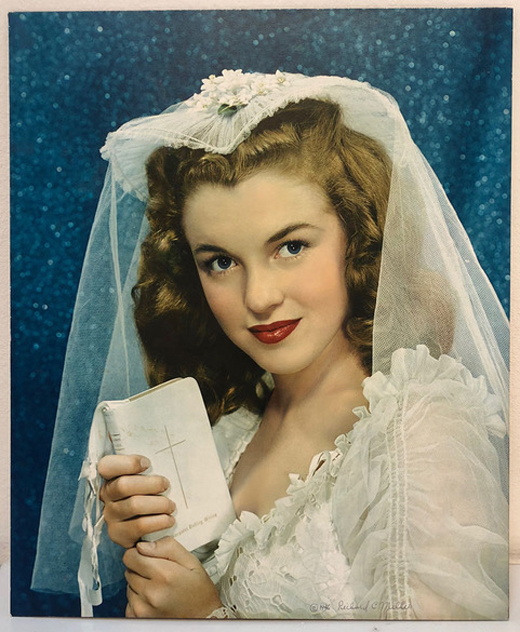 Topping the list of highlights is a recent acquisition of a one of a kind Carbro print done in 1946 by Richard C. Miller of a then Norma Jeane Dougherty (Marilyn Monroe) for the cover of Personal Romances magazine. The photographer met Norma Jeane in the spring of 1946, when she was just 19 years old. Miller was one of the first photographers to work with Norma Jeane during this early period in her blossoming modeling career with the Blue Book Modeling Agency. Among the many images that Miller made of her, this photograph depicts Norma Jeane wearing the wedding dress from her marriage to James Dougherty. In her hands is a prayer book belonging to Miller’s wife, Margaret Dudley Miller which is included in the lot.

A variant of this image, with Norma Jeane facing right, appeared on the cover of Personal Romances magazine in June of 1947. As the variation was only used during the production of the magazine, it was probably lost, making this photograph likely the only existing print from that session. Carbro printing is one of the finest and most archival color printing processes, which requires the precise registration of layers of carbon pigment. Miller was one of the masters of this technique, and this Carbro print of Norma Jeane was included in an exhibition of Miller’s photographs at the Getty Museum in 2009, alongside the work of another important Carbro artist, Paul Outerbridge. 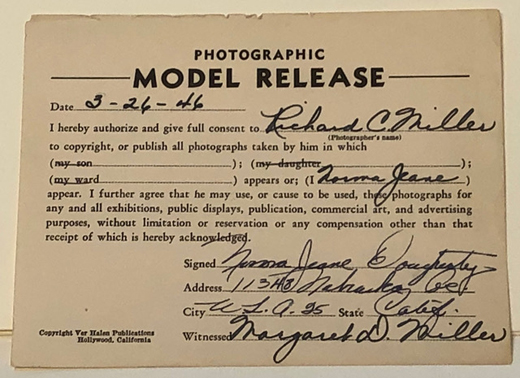 This print is accompanied by the original model release signed by Norma Jeane Dougherty in 1946. The auction lot also includes a portfolio of 12 recent archival pigment prints from Miller’s photography sessions with Norma Jeane in 1946. Regarding his work with Norma Jeane, Miller said, “I had no idea when I was taking these pictures that she would become famous and that the pictures would become valuable. She was just a nice, sweet attractive girl with outrageous ambitions. I just had no idea.”

Years later, Miller was photographing on the set of Some Like It Hot, when Marilyn Monroe passed by and said, “Hi Dick.” Dumbfounded that she even recalled who he was, he said nothing in return, not knowing if he should call her Marilyn, Norma Jeane, or “Nonny,” the nickname that Miller’s daughters had given her when she used to come over for dinner. This work and 250+ lots can be previewed at Bergamot Arts Center in gallery space B7. The continually updated catalogue along with registration, phone and absentee bidding forms are available at www.smauctions.com. Live internet bidding at www.liveauctioneers.com and www.bidsquare.com