Venice Institute of Contemporary Art (ViCA) presents “William Turtle: Undiscovered Legacy” at its new annex space, ViCA/Pedro, (opened Thursday, October 4, 2018), in San Pedro, California. This is a comprehensive exhibition of an important – yet completely undiscovered – artist who practiced various forms of art, from geometric assemblage to metal and wood sculpture, to collage and found object derived works. “Billy” – as he’s known to his friends – is fondly remembered for practicing his art daily while supporting himself as a woodworker in a well-known collective studio on Main Street in Santa Monica for many years. 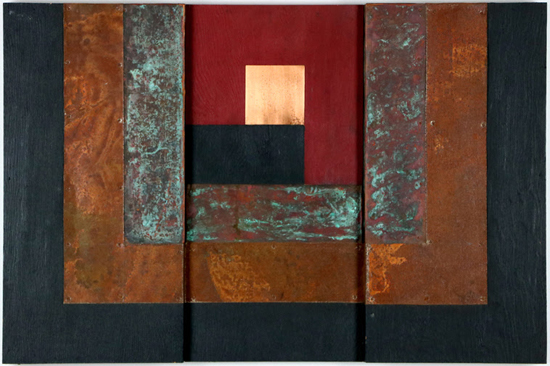 Decades later, he’s been rediscovered.   Upon an urgent call from Sandy Bleifer (who organized shows with the artist) in March 2018, ViCA discovered his work left behind in his studio, and many other artist’s works being thrown in a dumpster, and endeavored to protect and preserve, clean and document them.   Partly as a result of the sudden devastating death of his wife and lifelong companion Bonnie – longtime part of Venice’s venerable Small World Books – early in 2018, and less than a month later being evicted from his studio with just a few weeks-notice (another casualty of gentrification), Billy has re-located to the East coast. Unfortunately, he is no longer able to make his beloved art.

As part of our ongoing mission we present the remaining lifelong work of William “Billy” Turtle, along with insightful exhibits from a future-forward thinking, yet historical perspective.

A comprehensive catalog of Turtle’s body of works will be published following the exhibition, with essays by Curator Anna Dusi and Director of ViCA Juri Koll, among others. We encourage members of the community who know William Turtle, own his works, and/or have anecdotes about him to contact Juri Koll/VICA at  juri@veniceica.org.