Kohn Gallery is pleased to announce an exhibition of new work in the solo exhibition Facts, contradictions, puzzles, an explanation and a few lies by Guadalajara-based conceptual artist Octavio Abúndez opening November 9, 2019. It will be the first solo exhibition of Abúndez’s work at the gallery and in Los Angeles, following his inclusion in the group show Chingaderas Sofisticadas as part of the gallery’s participation in The Getty’s PST: LA/LA initiative. 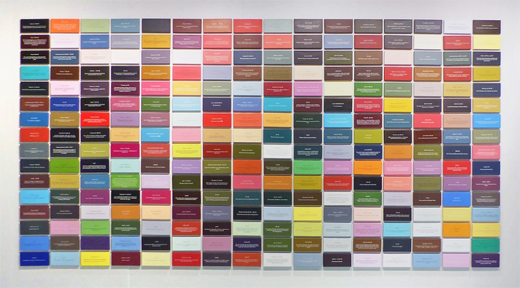 Abúndez’s installation of 256 small paintings forms a collage, loosely based on Gerhard Richter’s four 256 color charts, which approaches a text-based inspection of utopia’s conceptual history. Incorporated into the works are a collection of facts, thoughts, opinions, and some lies. Abundez’s research about utopias is woven together with texts and ideas drawn from communities in the United States and California, spiritual or religious beliefs, ideas about the afterlife, literature, law, politics, and cinema. The speculative nature of the work’s textual dimensions also appeal to mythological beings and a specific, unrealized utopic community in the artist’s mind that he refers to as “Thistopia”.

In the second series of the show, “We Could be So Much Better,” the artist employs pre-existing dialogues from films to further his critiques of futurity. Abúndez uses these quotes and dystopic film lines to create imaginary conversations that mirror our Western society’s current trajectory. The works are not dogmatic, however, as they are textured with humor, hopefulness, cynicism and melancholy all at once.

In the third series of works on view–the longest-spanning within his oeuvre–the artist uses grooved boards with plastic exchangeable letters, typically used as menus in restaurants or film marquees. Abúndez reorients the nature of the messages with heartfelt, sincere texts that generate aphorisms about utopia.

In the second gallery space, Abúndez will display “Chronic Complicatedness”, a series of sculptures that reference Albert Camus’ famous novel The Myth of Sisyphus. Interrogating fundamental questions about human nature, modernity and progress, each work demonstrates a struggle of opposing forces that must be resolved or forever stalled in brutal conflict.