Gagosian is pleased to present new watercolor paintings by Walton Ford. This is his first exhibition with the gallery.

Ford’s work explores where natural history and human culture intersect. His large-scale, empirically precise, and highly detailed paintings consider the drama and history of animals as they exist in the human imagination, revealing the deeply intertwined relationships between nature and civilization. Using the visual language and medium of nineteenth century naturalist illustrators such as John James Audubon, Ford masters the aesthetics of scientific truth only to amplify and subvert them, creating provocative, and sometimes fanciful narratives out of facts. 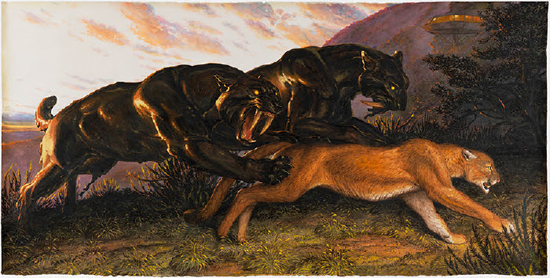 “Calafia” comprises a new series of epic paintings in which Ford depicts California through an amalgam of its myths, legends, and folklore. In a sixteenth century novel, Las sergas de Esplandían (The Adventures of Esplandian), the Castilian author Garci Rodríguez de Montalvo wrote of a fictitious island, inhabited by enormous flying griffins. On this island lived a tribe of Amazons, ruled by a warrior queen named Calafia. When the Spanish sailed up the western coast of North America, they named the land after this same imaginary island they had read about— thus fiction became history.