Skip to content
On View Now: Los Angeles Art Association Features the Photography of J.J. L’Heureux in its December Exhibition!

Artist J.J. L’Heureux ‘s work will be featured in Los Angeles Art Association’s annual open show opening December 13th. Curated by Susan Cross of MASS MoCA, the group show will features all mediums including photography, paintings, sculpture etc. L’Heureux has a busy weekend…her paintings an photography will be featured in another group exhibition at the Loft at Liz’s which will be opening on Friday December 12th. 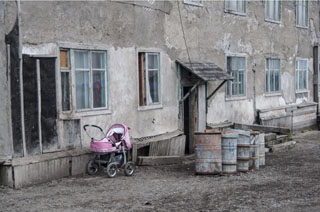 L’Heureux will be showing two photographs in the exhibition – “Pink Carriage” & “Blue Carriage.”

The images were shot in Uelen Village, where the Bering Sea meets the Chukchi Sea, the Kamchatka Region, the easternmost settlement in Russia and the closest Russian settlement to the United States.

L’Heureux lives an interesting life…at this moment she is on expedition in the Falkland Islands.

“Expeditions for me are usually about the environment and the animals that inhabit that particular environment,” said L’Heureux. “Most of my expeditions have been to the Southern Ocean where there are no permanent residents. Experiencing the Kamchatka Region of Russia up to Wrangel Island introduced me not only to the animals of the region but the people with their traditions in this isolated region.”

She said this specific trip (where these photographs were taken) was a fascinating experience for her. The residents of Uelen Village are quite isolated. They are marine hunters and also marine ivory carvers. She continued.” We were the first ship to visit with them for approximately two years. I was told that often ships from different countries visit to buy their ivory products and felt they were disappointed we had no interest in their carvings.” 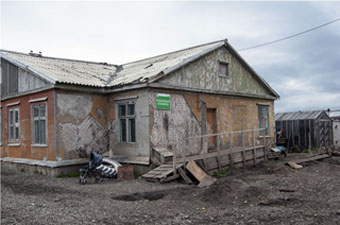 L’Heureux added that the remote village made an impact on her and inspired these photos. “For me, the photographs reveal two different descriptions of the futures of two loved and valued small children that emerge against the background of the weatherworn buildings. The choice of strollers, outside, indicated to me the parents have voiced a clear recognition that the sexual and social future of their babies will be one thing for a daughter and another for a son.”