Skip to content
LA Louver, Peter Goulds, What’s Next for the Art World? 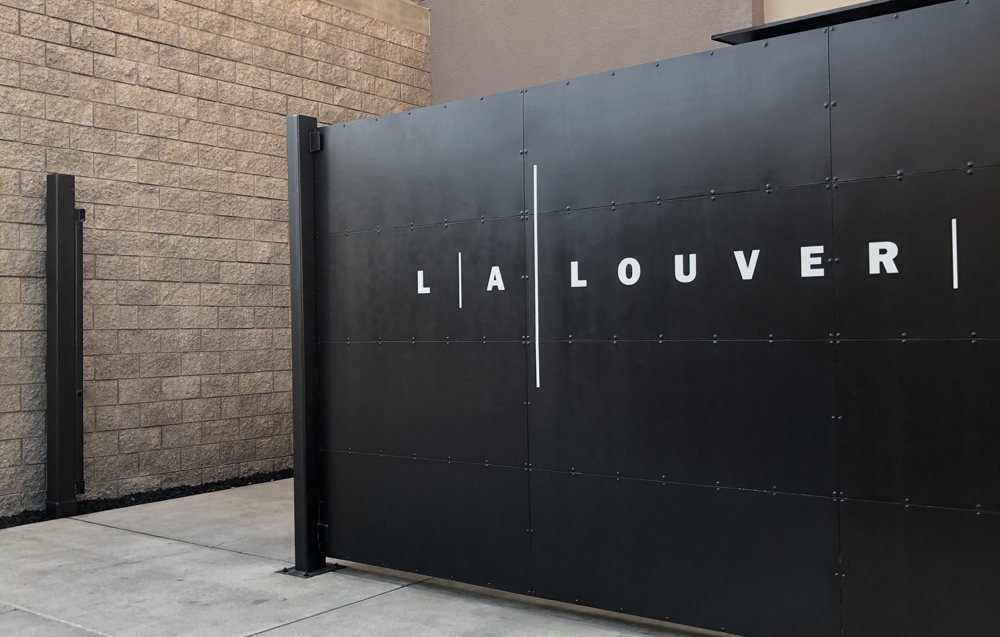 The art world, along with almost every other industry in the world, has been hit hard by Covid-19. According to an LA Times article, the results of a survey of thirty-five LA art galleries predict that we will most likely see a trimmed down list of Los Angeles galleries in the coming year.

I had a conversation with L.A. Louver Founding Director Peter Goulds about how he and the gallery are dealing with life during a pandemic. It was just two days after the opening reception of L.A. Louver’s “Tom Wudl: The Flowerbank World,” and “Don Suggs: Face-Off,” when the stay at home order was announced by Gov. Gavin Newsom. Disparaged but not defeated, the staff forged ahead working online via social media, conference calls, etc. “We have made seven sales of Tom’s work and several of Don’s since the show started,” remarked Goulds. Both exhibitions have been extended through June 20, 2020. Although the gallery opening date has not yet been established, accommodations can be made to view the work. 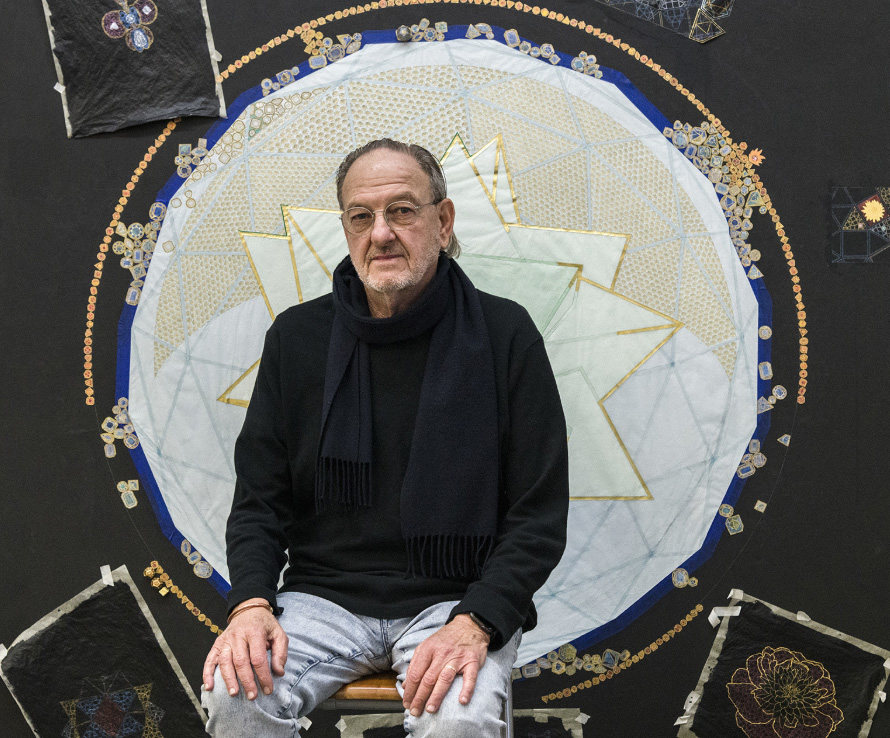 Tom Wudl; courtesy of the artist, and L.A. Louver

The gallery is currently hosting “May Madness,” an online competition, organized by Christina Carlos and her archival team. The contest allows the public to vote on their favorite exhibition from its 46-year history. The L.A. Louver staff has chosen thirty-two of their most beloved shows from over five hundred. Voting takes place through May 30 on Facebook and Instagram. 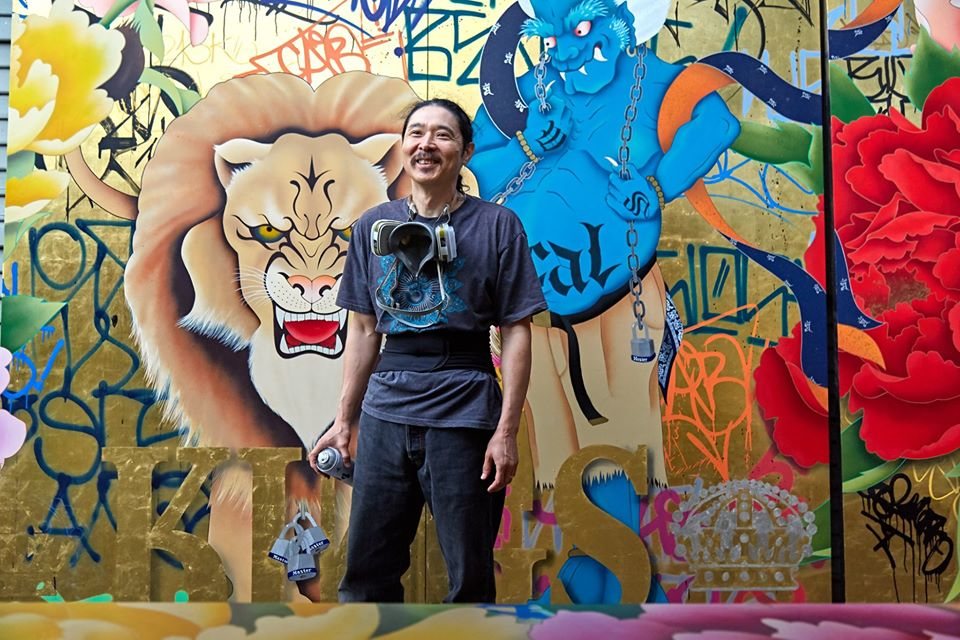 Gajin Fujita; photo courtesy of LA Louver, and the artist

With social media playing a larger role in the everyday duties of the staff, new clients are finding their way to L.A. Louver exclusively via this method. The team has continued to maintain its relationships and connect with clients, colleagues, and artists online. Goulds said he was grateful that no orders have been canceled and the gallery has continued to collect on business receivables. Like so many of us, he is awaiting the Mayor’s announcement to determine when the gallery can reopen, while conforming to all safety requirements.

The staff continues to be very involved in the estates of Ed and Nancy Kienholz and Leon Kossoff. A touching memorial exhibition was held (October 2019 – January 2020), after Nancy Kienholz’s passing. It featured the duo’s installation, “The Merry-Go-World or Begat by Chance and the Wonder Horse Trigger.” Now the focus has turned to the Kienholz foundation. “We have been working very hard to organize the Kienholz foundation – that has not been a small undertaking, to say the least. It was going on, of course for months before Nancy died in August of last year.” 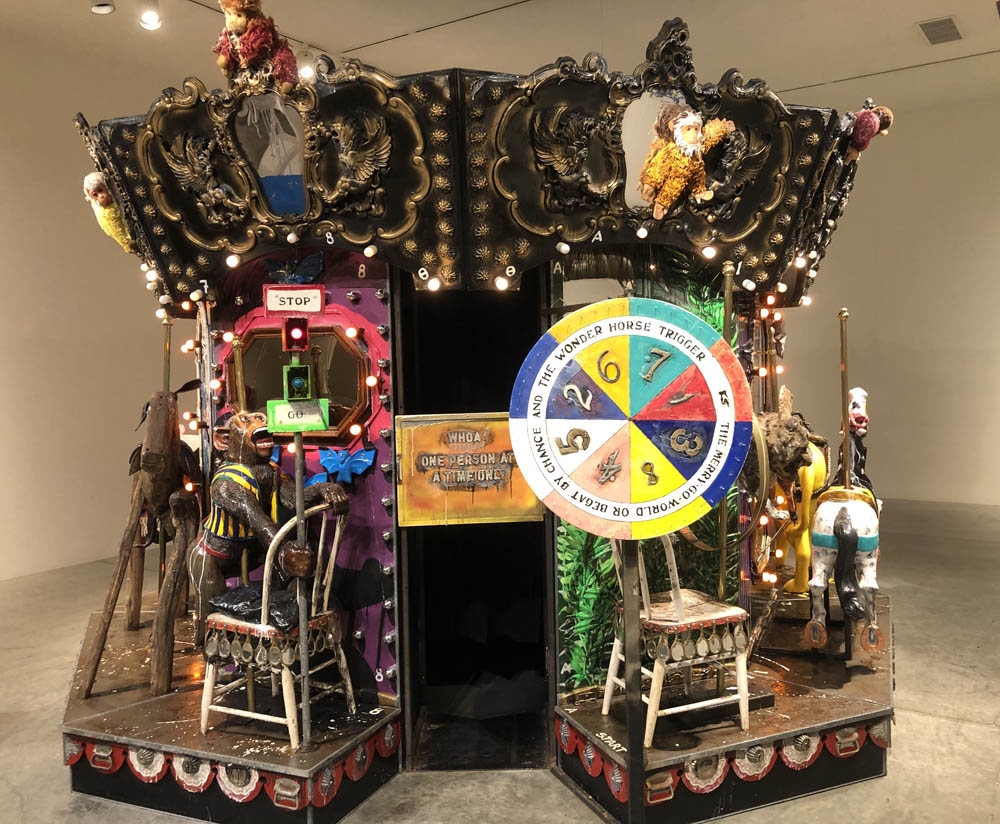 Edward and Nancy Kienholz: The Merry-Go-World or Begat by Chance and the Wonder Horse Trigger

“We have talented colleagues hired and trained to work along these lines in normal times. So it was relatively straightforward to adapt what they do day-to-day to the special circumstances we find ourselves in now.” In these unprecedented times, Goulds went on to say, “now we have global economics to consider. It involves every nation everywhere in the world so how does the art world deal with this? So what would it be? We don’t know.”

Goulds opened L.A. Louver in 1975 and was joined by his Gallery Director Kimberly Davis in 1986. He has witnessed first hand the Los Angeles changing art market. He said he has a strong hunch that galleries moving forward will choose to focus considerably more on the local scene…“whatever that local scene represents in their constituency.” 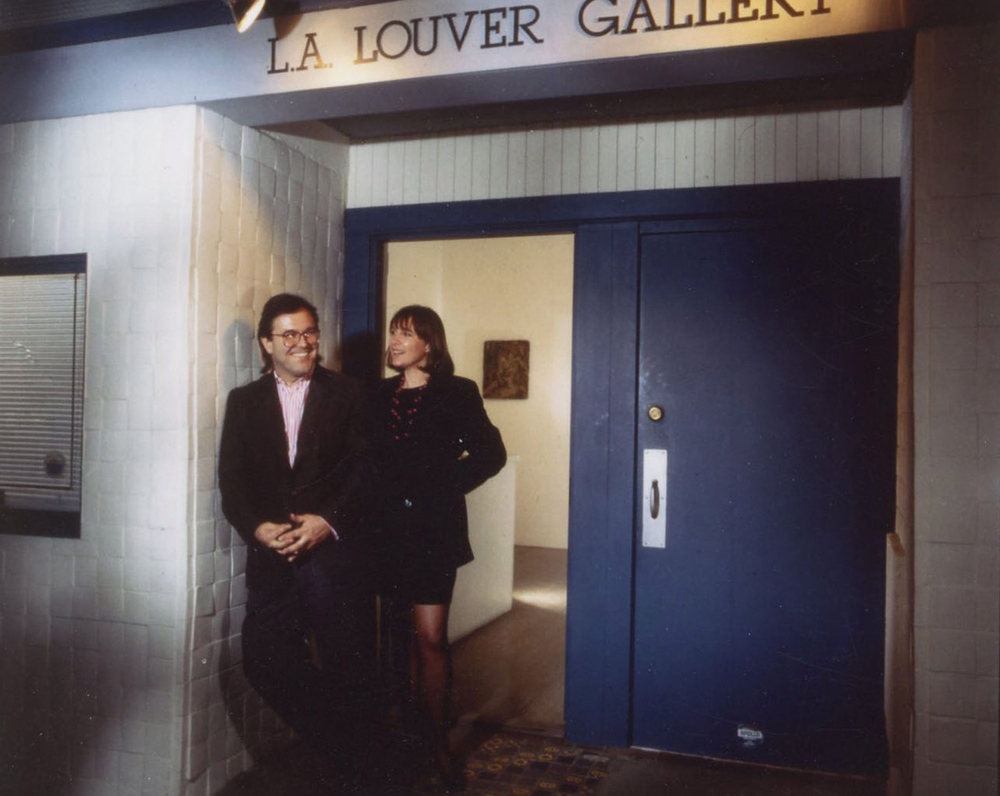 When the gallery was first formed, its mission was to show local artists in an international context, which was not being accomplished by galleries at that time. “Our predecessors were able to exhibit East coast art in Los Angeles, but not International art. “Now this is de rigueur, and standard practice, it will be very interesting to see if museums make concentrating on their collections, a priority…making individual exhibitions less frequent,” said Goulds. After this pandemic is all over, in addition to featuring international artists, the gallery will stay focused on new artists from the local scene. “We will all be drawing on our local resources. But I have a feeling that the globalization of the art world, through the art fair system is going to cause some challenges…and what form they take, we don’t know yet,” said Goulds. “But we certainly can anticipate that artwork platforms will play a larger role moving forward.”

Two of Art Basel’s fairs have been canceled/postponed (Hong Kong, Switzerland), with more uncertainty to come. The Hong Kong art fair, which was scheduled for March 2020 went straight to the web with the inaugural edition of Art Basel’s Online Viewing Rooms. Additional fairs such as the Dallas Art Fair (April) Frieze NY (May) would soon follow suit. 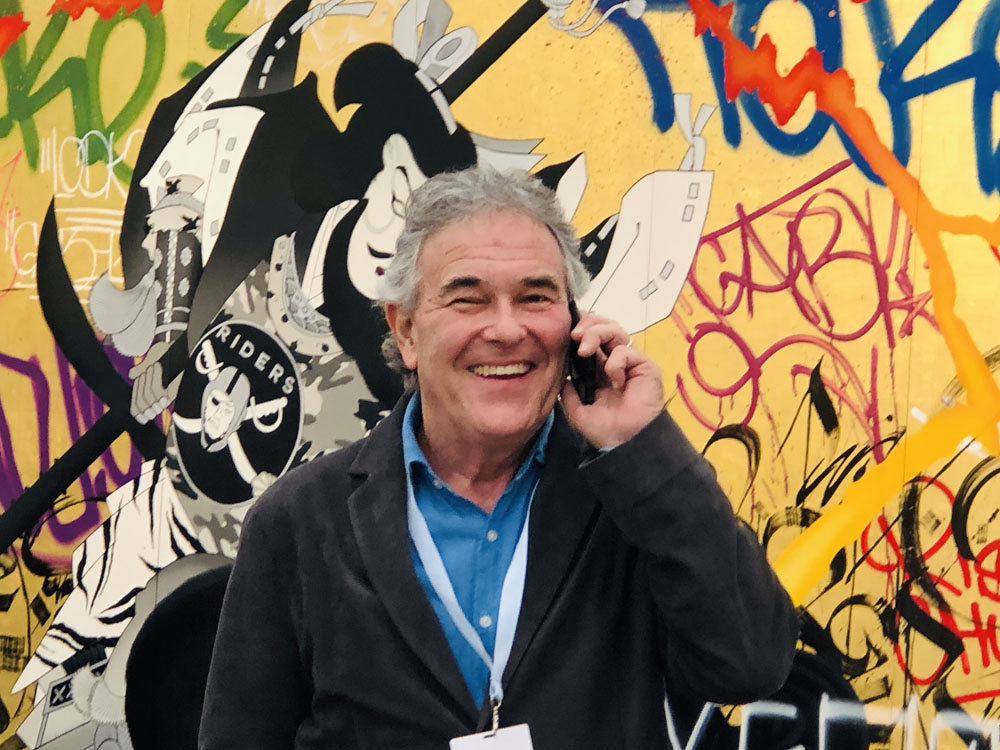 When asked what he was most proud of after his years of running his own gallery, he replied, “One of my greatest accomplishments in the last forty five years…is to mount that Duchamp exhibition we did a year or two ago, where we showed the collection of Francis Naumann. We showed 98 works of Duchamp, who only made 650 in his life. So that was a big achievement, because it was a very important part of my early research and my teaching when I taught at UCLA –  that was a certain kind of achievement.”

Artist Wallace Berman made an impact on him early on in his career, working with Goulds who was a newcomer to the LA gallery scene.  Since that time, the work of iconic artists have graced the walls of L.A. Louver. The gallery started working with Gajin Fujita right out of college in 1988. “Gajin is a towering figure. Allison Saar is a jewel and a diamond that is just being brought to full glory…to shine. She is getting the recognition she deserves. It’s nationwide, and it’s becoming international. So that’s a very proud achievement…that we’ve worked together.” 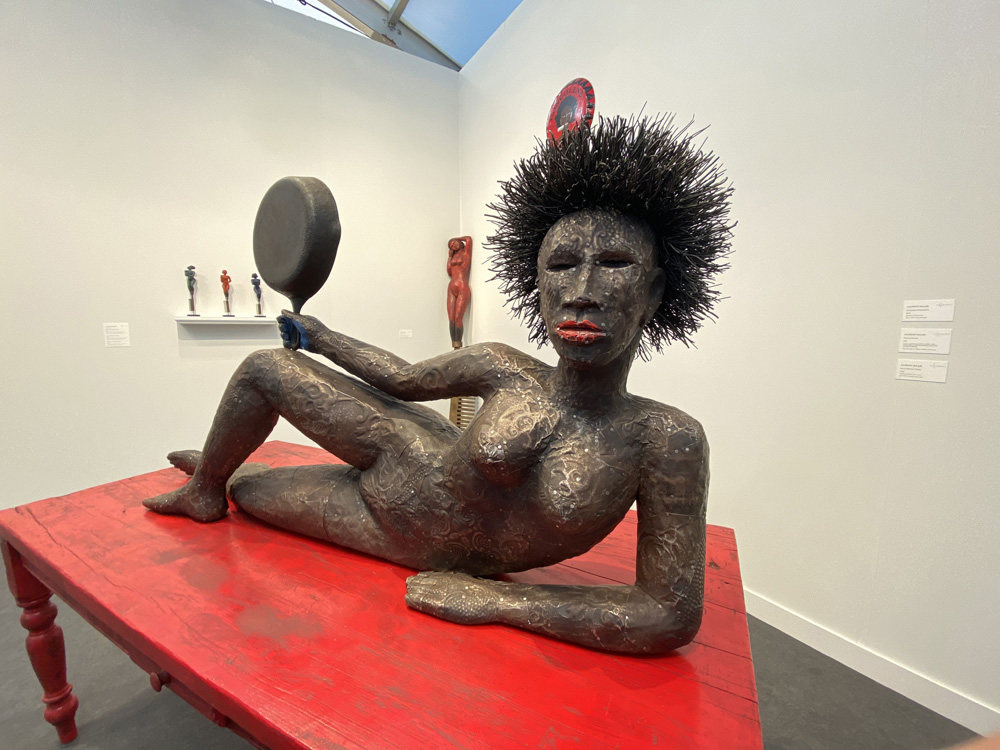 Goulds revealed that he has been keeping informed with up-to-date news on the art world by tuning into the Getty’s blog/podcast, The iris – Behind the scenes at the Getty. A recent talk led by James Cuno featured six museum directors speaking on how museums are dealing with the health crisis. He is also listening to astute discussions about the possible fate of the art world on websites such as the Israel Museum and Art Basel. Global Director Marc Spiegler interviewed Sadie Coles, Jeffrey Deitch, and David Zwirner about gallery collaboration, and how digital platforms will become a more integral focus of the art market as part of Art Basel’s Conversations series.

He said he is looking forward to getting back to business in two to three weeks. “London is poised to reopen. Paris is reopening. We are progressing with Kienholz shows in Paris, opening on the 5th of September.”

The gallery is currently designing a new exhibition program that is set to open late September or early October. “We want to reopen with a Declaration,” insisted Goulds. In the meantime, be sure to visit L.A. Louver’s website to view artworks, and enjoy the artist videos – https://lalouver.com/

Stay tuned for more info on this celebratory exhibition, to be posted on LAArtParty.com 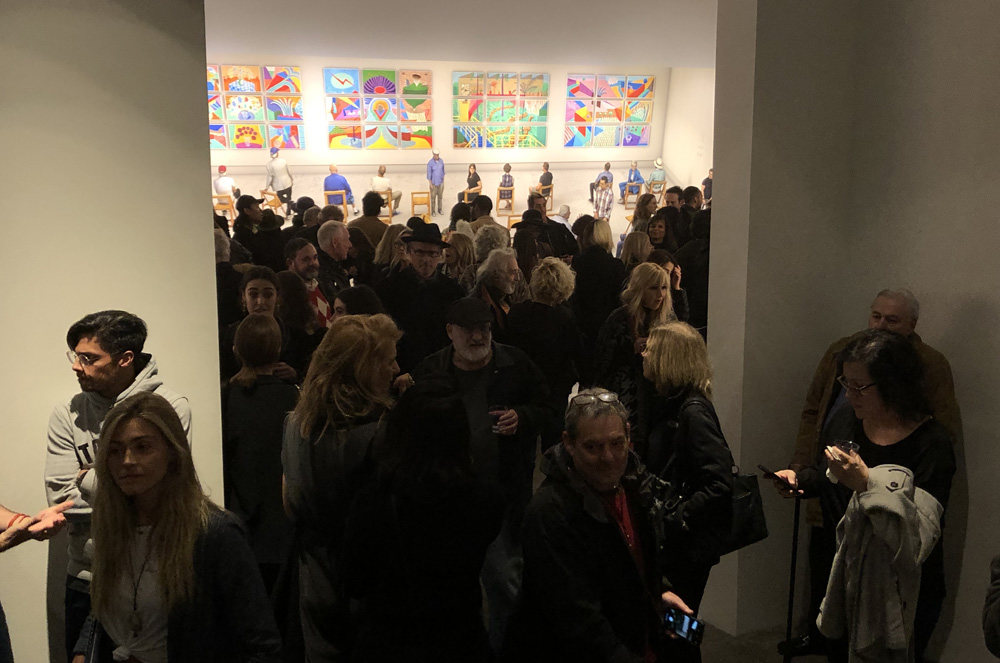 A lively crowd at a David Hockney opening at L.A. Louver