Summer begins with “Playing On The Edge” an uncommon Art Talk in which artists in Estonia from ViCA’s ‘Edge to Edge’ exhibition “talk” to a panel of artists in the gallery via a montage of video clips – live or otherwise – to open the event. Playing On The Edge takes place on Sunday, June 23, from 1-3pm. Artists in attendance will include Sonja Schenk, Bradford J. Salamon and MB Boissonnault, moderated by Artist/Curator Juri Koll. Estonian artists Tönis Laanemaa, Anonymous Boh (Artist/Organizer of the Estonian contingent of ‘Edge to Edge’), Raul Meel, Taje Tross, and Leohnard Lapin will be seen/heard in the video clips and become part of the context for discussion. 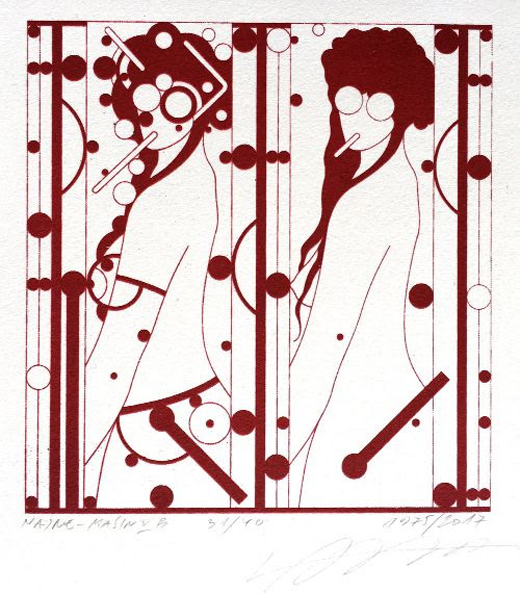 One aspect of the talk will be how consumption and technology affects the work we make, and whether we allow it to serve us or not. This Art Talk could be seen as discussion of a way to make it work for, instead of against, us.

Lapin was first to translate the 1927 “The Non-Objective World” by Malevich into Estonian in the 1970’s when he received a Polish translation from a friend. These ideas were banned in Russia at the time. His ideas of machines providing pleasure instead of simply production became the basis of his Machine, Man Machine, Woman Machine series, of which we have several examples in this exhibition.

Refreshments will be served.   Edge to Edge continues through June 29 at 2pm.