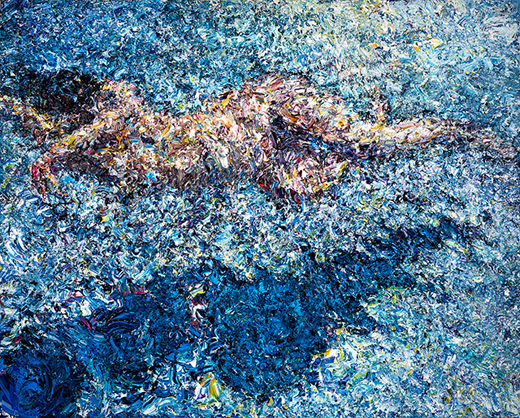 Here is some info provided by the gallery:
Whether they are submerged in pools of luscious impasto paint, or melting on blankets rippling over brushy patches of grass, Chrissy Angliker’s nudes exhibit a carefree harmonization with their environments. As she states, “the human body and the banks of a river, are both vessels for the same element. Water is an essential component of their composition, and also the intermediary between these vessels.” Born in Switzerland and living in New York, Angliker sets these paintings in vaguely familiar, yet unidentifiable, locations. On her canvases, as the presence of the paint grows, the images disintegrate and float apart. “My ultimate desire is that the viewer should be able to see the paint separately, like the microscopic cells from which the illusion gets created. The bigger the gap, the more space for the viewer.” When approaching one of Angliker’s paintings, you piece together the fragmented image, “see the transparency of how it was created,” and ultimately, share that time and space with the artist.

Kelly Berg records her immediate impressions of Hawaii’s craters, lava fields, and jagged formations in oily ink spread on a metal plate, simultaneously describing the landscape and relating to its viscous, craggy, texture. The monoprints made from these metal prints are unique, even when Berg chooses to work with the ghost image of a used plate, she is manipulating and morphing the original image, like a memory that is constantly revisited. She is stimulated by the sublime, wrangling with the conflicting emotions of fear and attraction, of terror and awe. Her lifelong obsession with extreme weather and geology began during her childhood in Minnesota watching summer storms and visits to National Parks. After the Hawaii’s Kilauea Volcano erupted in 2018, Berg returned, and observed “how the landscape had shifted and changed…a metaphor for the current state of our world and environment beyond Hawaii.” Working at The Donkey Mill Art Center in Holualoa, Berg uses spikes and pyramids in the prints to represent the “volcanic energy within the island.” While this chaos is emblematic of our anxious age, Berg also uses the pyramid as a symbol of transcendence, providing an ancient human context within the shifting natural tangle of lightening and lava.

Rachel Rosenthal was one of the key figures in West Coast performance art, creating works that combined theatre, dance, multi-media staging and live music. Born in Paris in 1926 of Russian Jewish parents, she studied at the High School of Music and Art in New York, and then the Sorbonne in Paris. Moving back and forth between the two artistic capitals, she studied with Hans Hoffman, danced with Merce Cunningham, and formed relationships with Jasper Johns and Robert Rauschenberg.

A little known aspect of her early career centers on her study of engraving and etching with the English artist, Stanley William Hayter. Hayter founded his printmaking studio in Paris in 1927 and, after moving to No. 17 rue Campagne-Premiere in 1933, it became known as Atelier 17. In Paris, Hayter worked with artists such as Picasso and Giacometti and when he moved to New York during WWII, he worked with Jackson Pollock, Mark Rothko, and others. The circle of artists studying with Hayter with whom Rosenthal became friends included, Terry Haass, Wifredo Lam and Pierre Courtin. These artists exhibited their etchings and engravings together at the IX Salon de Mai in Paris in 1953. The exhibition at Craig Krull Gallery will include Rosenthal’s works from this period, as well as works by those of her circle with whom she traded prints.

Rosenthal moved to Los Angeles in 1955, becoming involved with the art scene surrounding Ferus Gallery; that same year, she created the experimental “Instant Theatre,” performing and directing it for ten years. She played a major role in the Women’s Art Movement in LA, co-founding Womanspace Gallery in 1973. Her place in performance art is legendary and her influence vast. She died in Los Angeles at the age of 88 in 2015.