Hauser Wirth & Schimmel presents ‘Isa Genzken.’ I Love Michael Asher, the first Los Angeles solo exhibition for the celebrated German artist. Genzken (b. 1948) was in her late 20s when she visited Michael Asher in California on a travel grant from Dusseldorf Academy, where she had begun teaching in 1977. At this time, Genzken was producing sleek lacquered wood sculptures known as ‘Ellipsoids’ and ‘Hyperbolos.’ This minimalist body of work, which lasted through the early 1980s, engaged with spatial and social aspects of line, mass, scale, color and movement through and around the works. 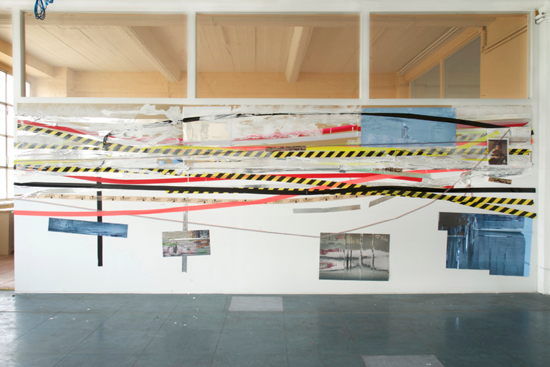 Since their meeting, Genzken’s diverse practice has encompassed sculpture, photography, drawing and painting. Her work borrows from the aesthetics of Minimalism, punk culture and assemblage art to confront the conditions of human experience in contemporary society and the uneasy social climate of capitalism.

‘Isa Genzken. I Love Michael Asher’ will remain on view through 31 December. In addition to her interior installation of all new works, the exhibition features the outdoor Courtyard installation of ‘Rose III,’ a 26 foot tall sculpture modeled after an actual flower Genzken chose and sent to the foundry. The work simultaneously defies and underscores the fragility and beauty commonly associated with the image of the rose.

Also opening on view, is a comprehensive exhibition of the renowned Dadaists Kurt Schwitters (1887 – 1948) and Hans Arp (1886 – 1966), in the context of works by the Spanish painter, graphic artist and sculptor Joan Miró (1893 – 1983). ‘Schwitters Miró Arp’ was first curated for Hauser & Wirth Zürich in Summer 2016 to celebrate the centenary of the Dada movement in the city of its birth. The new iteration of this group show will include a significant addition of works by Hans Arp – the first large-scale treatment of works by Arp in Los Angeles.

‘Schwitters Miró Arp’ is dedicated to the re-evaluation and rediscovery of three fascinating figures who instigated a material language that continues to inform contemporary art today. From the turn of the century, this trio of artists was united by the impulse to renew and transform artistic expression. Building on the achievements of Cubism, they pursued this goal through experimentation with collage and assemblage, generating radical new ideas to confront a Europe characterised by the catastrophe of war. 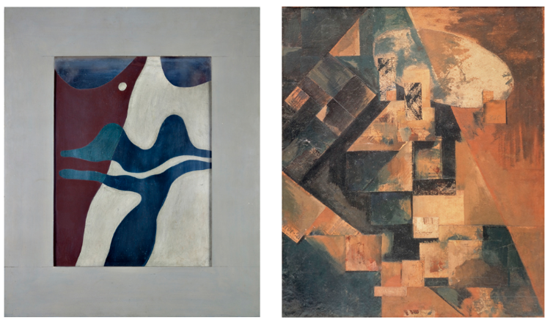 About the Exhibition: In 1918, Schwitters and Arp developed a close friendship founded on a lively exchange of artistic ideas. In 1926, Miró and Arp shared a home in the Les Fusains artists’ colony at Rue de Tourlaque 22 in Paris, where Schwitters also travelled each year, and most frequently between 1929 and 1932. Arp had first become acquainted with collage in 1914 in the studio of Picasso; he conveyed the new technique to Schwitters during their time together in Paris and it went on to become an essential facet of Schwitters’ oeuvre. In turn, Miró’s experiments with the assemblage of everyday objects in the late 1920s were strongly influenced by Schwitters, Arp and the Dada movement.

Each of these artists shared an interest in the fusion of painting and sculpture through the art of assemblage. While Schwitters dramatically expanded the artistic frame of reference with his ‘Merzbilder,’ particularly through the use of materials found on the street, and Arp continued to develop his abstract organic reliefs, Miró found his own raw yet poetic way of engaging with the material. Miró’s play with geometric and organic forms can be interpreted as a link between the artistic expression of Schwitters, who had already begun to distance himself from the reproduction of natural forms in 1918, and the biomorphic compositions created by Arp. Their mutual influence upon one another resonated throughout their careers and into their late works.

Highlights include Schwitters’ collage, ‘Untitled (ABLE)’ (1947); an early example of Schwitters’ Merzbilder – ‘Merzbild 1B Bild mit rotem Kreuz’ (Merzpicture 1B Picture with Red Cross) (1919), and Arp’s ‘Tête; Lèvres écossaises’ (Head; Scottish Lips) (1927). Arp’s painting find its source in Dada’s idealistic concept of redemption through primitive, abstract forms, yet its biomorphic shapes are characteristic of the new formal language the artist developed by abstracting elements from the natural landscape. It belongs to the remarkable series of painted reliefs that signalled his return to figuration in the 1920s – he turned to a simplified figurative style and a new iconography of faces and objects to create critical and humorous images. Arp often focused obsessively on one body part such as a nose or moustache – or in this case, a navel – to the extent of overwhelming the perception of the entire figure. In attacking human folly directly, through parody or objectification of the body, Arp adopted Dada’s embrace of the irrational and absurd. 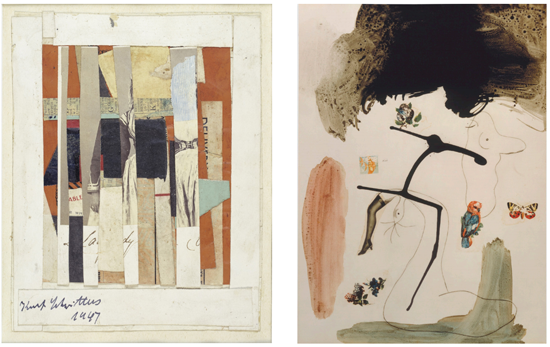 ‘Métamorphose’ (Metamorphosis) (1936) is from a series of outlandish and poetic collages that mark a period of fervent experimentation in Miró’s career. Interlaced lyrical and biomorphic figures drawn in fine pencil are punctuated with outmoded and eclectic imagery in the form of old postcards, newspapers scraps, anatomy albums or art nouveau motifs. The meeting of instinctive, delicate line and crude imagery lend the works a distinct sense of humour in accord with the Dada sensibility.